All Variants in Marvel Snap explained

All Variants in Marvel Snap explained

What are Variants, how to get them and a look at a lot of examples. 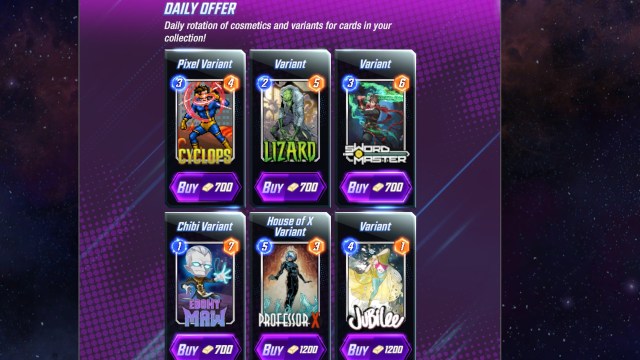 Screenshot via Marvel Snap The Daily Shop is the main way players can acquire variants in Marvel Snap.

Just like in any game, Marvel Snap knows that players want to personalize their experience — and when it comes to this card game specifically, it’s all about blinding your opponent with shiny and rare cards.

The variant system in Marvel Snap allows players a unique way to reimagine their favorite superheroes and villains in the craziest alternate realities. Here is a quick but in-depth guide on how to acquire variants and what are the different kinds of them.

What are variants in Marvel Snap?

Variants in Marvel Snap are similar to skins in other games. For players wanting to bling out and show off, variants allow players to bring some personality to their decks with alternate art cards of their favorite characters. There are many different variants for every single character.

The double-edged sword however is that variants count as an additional card. Players who have put in resources upgrading their standard versions won’t see those same upgrades transferred over. At the same time, they count as new cards for players to upgrade for their collection level.

As for what it takes to acquire these, players can get Variants from the rotating daily shop or through rewards via collection level or battle pass.

What are some of the different variant styles?

Characters in this Variant are depicted as miniature and cute versions of themselves in an Anime-esque art style. Some of the characters that have a Chibi variant include Ebony Maw, Aero and Deathlock.

have you SEEN this one?!?!? pic.twitter.com/YrWDTm3tVX

This variant has each character depicted as an athlete playing different sports. Some of the characters with this variant include Miles Morales Spider-Man, Misty Knight and Nick Fury

This variant has each character in an 8-bit art style like it’s from something out of a classic video game. Some of the characters with this variant include Hawkeye, Iron Man and Doctor Doom.

This variant has characters beating the summer heat in summer beach atire. Some of the characters that have this variant include Doctor Octopus, Cosmo, and Iceman.

In the 1602 variant, characters are transported back 500 years and are wearing clothing that was common in that era. Some of the characters with this variant include Medusa, Bucky Barnes and Enchantress.

There are many more different variants, including character-specific ones with more bound to come out in the future.