All confirmed multiplayer guns coming to Call of Duty: Vanguard at launch

All confirmed multiplayer guns coming to Call of Duty: Vanguard at launch 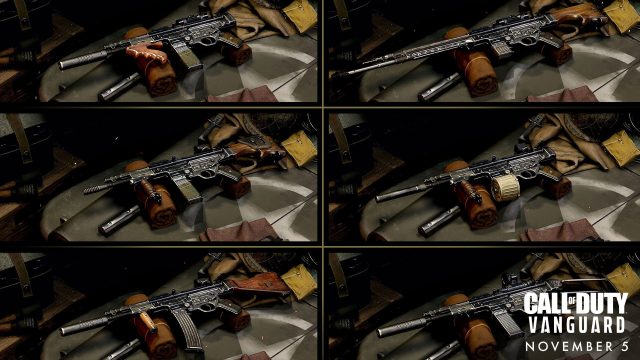 Provided by Activision Call of Duty: Vanguard weapons being showcased.

The week of Call of Duty: Vanguard’s release is upon the community and the hype is starting to build. Thanks to Sledgehammer Games’ blog post last week, fans have a much better idea of what to expect on Nov. 5. This includes intel of every map, perk and multiplayer game mode coming at launch. However, one area where there’s still some ambiguity in Vanguard multiplayer is the guns department.

There are 38 weapons arriving on Nov. 5 and players have been anticipating them for some time. They even know how many guns are coming with each category. However, the specific guns in each of those categories within Vanguard are unknown. Players can see all of the confirmed weapons in Vanguard multiplayer below.

At launch, there will be 27 primary weapons and 11 secondary weapons in Vanguard. Season 1 of the game releases on Dec. 3. For now, though, fans can the list of base weapons coming to Vanguard.

As players can see, there are still nearly a dozen guns that are currently unknown in Vanguard multiplayer. These are mostly weapons that haven’t been seen in any marketing trailer or during the beta. However, some on this list, like the Type 100 SMG, weren’t seen in the beta but were featured in a gameplay trailer.

It’s unclear whether fans will get to see the full list from an official source before the Nov. 5 release date. There will likely be a plethora of leaks to surface later this week, though. So, if players want to be surprised by the weapon list, it’s advised they stay off socials until Friday.