All CDL camos in Modern Warfare 2 multiplayer have been leaked

All CDL camos in Modern Warfare 2 multiplayer have been leaked

The CDL is receiving more camos in MW2 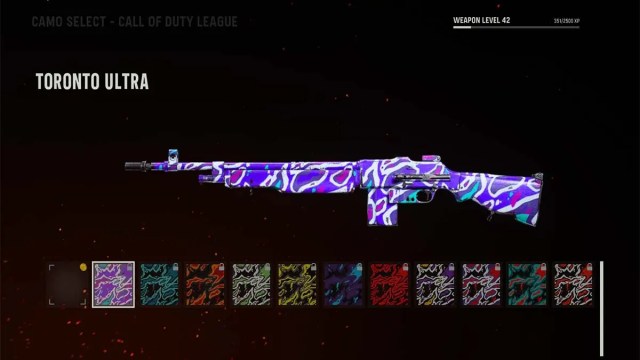 Provided by Activision The CDL camos weren't well-received in Vanguard.

An early breach of the Call of Duty: Modern Warfare 2 multiplayer menus has allowed players to see a plethora of hidden content. Players were able to bypass the campaign and gain access to the multiplayer Gunsmith system. Through this breach, players were able to see every weapon in the game in addition to the different camos associated with them, including the four Mastery Camos. In addition to the base camos in multiplayer, fans were able also to see the apparent CDL camos coming to Modern Warfare 2.

The CDL (Call of Duty League) camos have become a mainstay in the Call of Duty franchise. The camos are released to allow players to don the colors of their favorite CDL team in-game. In the past, these camos haven’t been in the game at or near launch. Instead, Activision waits until the CDL kicks off to release the camos. For the past three years, this kickoff date has been around February. However, for the 2022-2023 season, the first Major takes place in December, right around the launch of Season 1 Reloaded.

This could mean that Modern Warfare 2 will see an early release of the CDL camos. For now, though, players can view the camos in full.

Unfortunately, since any image of the CDL camos online resulted in a copyright strike from Activision, we’ll have to show you a clip from former COD player ZooMaa’s Twitch stream. ZooMaa looked at the camos via a Reddit post.

The camos in the image on ZooMaa’s stream are exactly how they appeared in-game. All 12 CDL teams are represented, as expected. The camos in MW2 look different than in years past, but not by much. Activision has stuck with the same camo pattern for the skins. However, the skins now cover the entire gun and are much more vibrant than they’ve been in years past.

The skins will likely be bundled together with stickers and a charm of the team’s logo that players can equip to further customize their guns. If past years are any indication, these skins could be released right around the start of the CDL season, which occurs in early December. Although, we haven’t heard anything concrete on that front yet.