Neither Riot Games or Twitch has reached out to the team 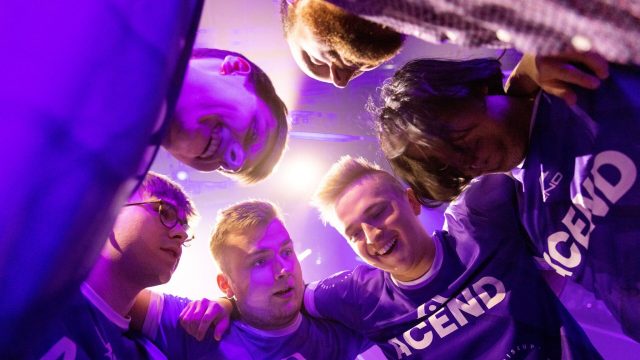 Provided by Riot Games Acend in a huddle before they face off against SuperMassive Blaze at Masters Berlin.

Acend released a statement about Mehmet Yağız “cNed” İpek’s unknowing involvement in the Twitch money laundering scandal on Wednesday, explaining that neither Twitch nor Riot Games has reached out to the team about the situation.

“CNed had no contact with the perpetrator of the scheme and did not agree to receive the bits,” the statement reads. “They were sent without his knowledge or consent. The connection of the bits to the same person involved in the scam was made after they were donated. Unfortunately cNed did not report this to Twitch and chose instead to ignore it, which he admits to being a mistake at the time.”

According to a translation provided to Upcomer, cNed said, in a stream on Sunday, that he received the bits and returned half the money after being threatened by Kojou, through his brother, with a massive donation that would cause Twitch to suspend his channel. The entirety of cNed’s statement during that stream, with timestamps, is as follows:

6:22: The news is obvious, the topic is known. To be honest I don’t really have a statement to make about the topic because I’ve not even once messaged the bit-dude, he did not reach out to me (directly) once. He talked with my older brother and he’s statement … is on the twitlonger … As you can see through the screenshots (from his brother’s statement), I have not a single message in those. It’s up to you to believe it or not, I can’t do anything about it, unfortunately, I wish I could do something.

8:03: I’m not the kind of a person who releases statements so right now I’m a little tense because I’ve never been involved in such schemes in my life. I’m not used to these kinda things whatsoever, those who know would know.

8:49: That guy sent me the bits, the bits transferred to me. I didn’t report those bits to Twitch, I acknowledge that. I didn’t report to Twitch and took the money. I repeat once again, the guy did not contact me. According to what my older brother told me, he threatened with his routine “I’ll send a huge amount of bits to your channel and cause it to shut down” tactic hence I was put in a position where I had to send half of the money to him. I acknowledge that even though I did not intend to, technically I got involved in this, unfortunately. I wish I could think of returning the bits, if only I could do this. By the way, spamming a channel with bits and causing it to close down is a real thing on Twitch, I know it because it happened to a friend, Twitch cuts down all the revenue… That’s about it. Even though this explanation does not prove me innocent since I technically did do something such as this…

12:02: “Tell us about the cheaters”, that’s not my claim bro, I’d leave it to Riot, even if I think someone is a cheater I wouldn’t say it out loud. I wouldn’t reflect my thoughts outside since I don’t want to put anyone on the spot. In the span of 1.5 years I’ve been playing Valorant, I dodged all the trash talk, never responded to anyone and kept playing my game. I have no business with daily dramas.

12:43: Now if we talk about the video issue (the one his brother released in retaliation to Legoo’s statement, basically Aslanmashadow, russ and some other people trash talking behind cned’s back), I’ll explain that too so everything can be settled. I’ve been keeping that video for about 1.5 years and never shared with anyone but my brother up until now, my mods sent me (the video). I could’ve easily release it and cause a drama but I didn’t, whatever. Compared to the hate I received, that video is nothing. After the video Batu (russ) came to me and apologized. And the video issue came to an end like that. When an issue such as this arised, my brother shared it (on his twitter). Like I said, I care about my side of the story so I’m making my own statement (he means he doesn’t care nor feel the need to explain how things went between the guys on the video and his brother)

In a Discord message that deNc released in a Twitlonger about the incident, and through a translation provided to Upcomer, deNc talked over getting involved with Acend’s cNed and told Kojou (now under the name Deleted User e3c55eb5) that cNed would not like to be involved. The full translation for those screenshots is as follows:

“Morning Alihan (deNc) did you talk with cned and what did he say?” Kojou said. “Can you respond quickly? There are 24 verified streamers now it’s 25. I will stop when it hits 30 and my streamer slot will be full. I can not do more.”

“Show cNed this,” Kojou continued. “This streamer has 86 average viewers and 14 subs. Streamer has 53$ of their own. I divided 200k bits into 5 days. It adds up to 2k$ paid. If they can get this cNed would take 500k but I do not want to risk the streamers so I do not sell more than 200k bits in a month. 1 million bits are too much. If I send it to a streamer they might notice. There are millions of streamers. Twitch can not check every single one of them. Bits are always sent in other countries; it would not bat an eye. I have been doing this job for 14 months and there were no problems and there will not be a problem. Do not worry about it.”

“I talked with cned and he does not want to be in something like this,” deNc said. “We do not want to gain money unfairly. Thanks.”

Later in the conversation, Kojou said he sent bits to cNed on stream.

“What are you doing by yourself? Who asked you to send the bits?” DeNc said. “Did not I tell you that I talked with Cned and he does not want it? Please do not talk to me anymore. I can not work because of you.”

“Alright, send the money back next month when it arrives,” Kojou responded.

This is a developing story and will be updated as more information becomes available.