LDLC OL and AGO Rogue are the two undefeated teams left 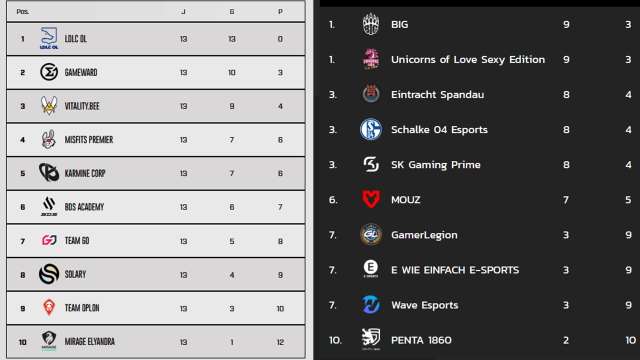 While the League Of Legends European Championship is currently only at three weeks of competition, the European Regional Leagues are beyond their first half of the split. A lot of those ERL teams are currently performing differently than in spring; this means we might see new surprising faces at the next European Masters. On the other hand, some teams such as AGO Rogue continue to dominate their region. If you couldn’t keep up with all of this, no problem; We’ve got your covered with a summary of the European Regional Leagues summer split, as well as what to expect in the coming weeks. 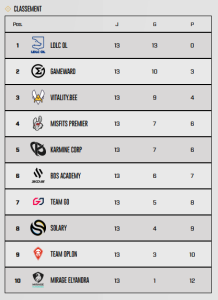 Yes, LDLC OL is still undefeated. This is an impressive consistency at the top of the standings. Last split LDLC finished first place during the regular season with a score of 13 – 5. They can only improve this record now. While LDLC lifted this LFL trophy in spring, they lost in the European Masters finals against Karmine Corp. The EUM champions in question are currently slacking a bit in the ranking. BDS Academy and Misfits Premier also had a difficult start of the split, but they picked up more wins recently.

The big surprise of the season is GameWard who are currently sitting at the second place of the league. This is very surprising considering that they finished eight place in spring and that the roster didn’t make a single change. However the team is playing much better and look like legitimate contenders. The mix of former LEC players such as mid laner Paweł “Czekolad” Szczepanik and promising talent such as top laner Dawid “Melonik” Ślęczka found its feet.

What’s certain is that the competition between playoffs teams will be strong once again in the LFL. Even the currently third placed Vitality.Bee eliminated the former champions of our next league down this list at the European Masters. 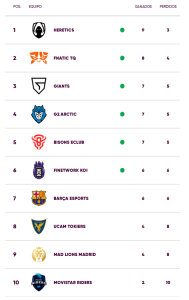 The Spanish league is also having a team exceeding expectations with Heretics. The team missed out on playoffs last split despite forming a roster around hyped up bot laner Jakob “Jackspektra” Gullvag Kepple. Now they are actually delivering and this despite a single roster change. The addition of Marcin “iBo” Lebuda has been very beneficial as he’s arguably now the best top laner in the league.

Fnatic TQ were undefeated at this point last split and while they’re not looking dominant anymore, they’re still a solid top team to look at. They’re now play in a more competitive league considering past offseason changes. This is the case of GIANTS who signed players such as mid laner Daniele “Jiizuke” di Mauro and suport Henk “Advienne” Reijenga. While it took time for the roster to work together, the team is now slowly starting to solidify itself at the top of the rankings.

KOI and Barça eSports are currently both sitting at a score of 6-6 and this shows that in the SuperLiga, the race of playoffs is still on. 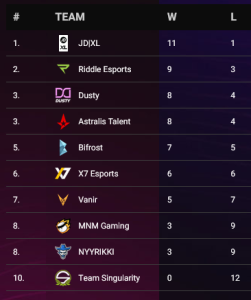 Excel is performing pretty well in the LEC at the moment, but their academy team in the NLC is doing even better. While top laner Felix “Kryze” Hellström also plays super well, JD|XL still play around their mid laner Jang “EMENES” Min-soo, who was looking really dominant last split. For JD|XL the question is if they can keep this form and not crash in playoffs like they did last split. So far they only lost one game to X7 Esports.

X7, who lifted the trophy last split are having a difficult start with their score of 6-6, but they’ll look to turn it around with the addition of jungler Anton “Viking” Andersson for next week. In the meantime, Riddle Esports are in second place and work well as a team. The organization made it to the European Masters two years ago and will be trying to return this year. Other than that, not too many surprises in the NLC, but the addition of jungler Linas “Lyncas” Nauncikas is working wonders for Dusty. Them, Astralis Talent and Bifrost will be fighting for the top spots in the league. 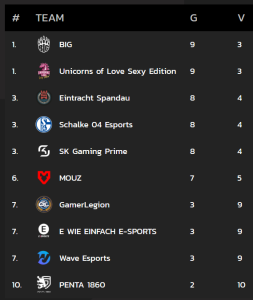 Similar to X7 in the NLC, GamerLegion are also struggling in their league after winning the split in spring. While their score of 3-9 is also worse, this also follows a disappointing European Masters performance from the team. In the meantime, the organization known for sending talents to the LEC is back at the stop of the standings. Indeed, BIG roster changes are working quiet well so far. Unicorns Of Love Sexy Edition are also sharing this first place for now, they were the only Prime League team making it past group stage last EUM. Right now they are in an eight-game winning streak as they caught up to BIG, now they just have to surpass them.

Overall there is a clear defined top 6 in the region but all of those teams are really close. Any of those could still possibly end in first place and that’s a race you may look forward to. 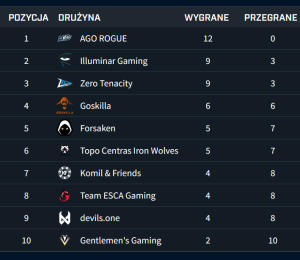 Ago Rogue is the best team in Poland by far, this hasn’t changed, even with now Hampus Mikael “promisq” Abrahamsson as support. At this point, anyone but AGO Rogue winning the split would be considered an upset.

Meanwhile, Illuminar Gaming are rising back up in the rankings! They finished ninth place in spring and are now at a score of 9-3 in second place. Unlike GameWard in the LFL this is a completely new roster, sometimes change does matter! It’ll be interesting to see if this full young Polish squad can make it to the European Masters.

Next to Illuminar, Zero Tenacity are clearly completing the top 3 of the region. While they have some international talent, the Polish veteran Sebastian “Sebekx” Smejkal is looking very strong in the mid lane.