In a potential Worlds 2022 preview, EDG and TES will battle for the second time in the 2022 LPL summer playoffs 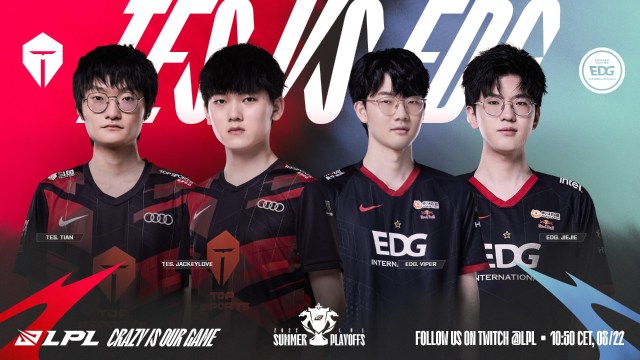 Although everyone’s looking at the 2022 League of Legends Champions Korea finals happening tonight, the League Pro League is featuring a potential preview of Worlds 2022; Top Esports is taking on Edward Gaming for a spot in the 2022 LPL summer finals. Here is a preview of how each team has got to this point and a look at what each team needs to do to secure the win,

EDG have played close to their Worlds 2021 peak as soon as they entered the 2022 LPL summer playoffs. After a down split — at least by their standards — EDG turned up the heat by taking down FunPlus Phoenix in their first round and then in shocking fashion, dismantled the reigning 2022 Mid-Season Invitational champions, Royal Never Give Up. Following that, they ran into the number one seed, TES; in a thrilling five-game series, TES were able to take the series and push EDG down into the losers bracket.

Knight came up clutch all series but put on a show in the comeback game 5 to secure the series and Worlds! #LPL pic.twitter.com/sBQ3Zqnw3q

Since that match, EDG didn’t skip a beat as they eliminated LNG Esports in a 3-1 series. On the other hand, TES went to war against JD Gaming in the upper bracket finals. In one of the best series of the year, JDG came out on top. EDG is coming into the rematch feeling good after their recent win but TES have already proven they are able to beat EDG. But don’t get it twisted, these two teams are as evenly matched as you can possibly get.

EDG: the path to victory

Looking at how EDG earned their wins in the last TES series, it was mid laner Lee “Scout” Ye-chan and bot laner Park “Viper” Do-hyeon that were able to pick of player of the game honors and of course they will be important if EDG will want to win this series. However, even though EDG can go toe to toe with TES in the mid and bot lanes, its the other two positions that will make or break EDG in this upcoming series; top lane in particular is a way for EDG to earn a significant advantage.

After winning rookie of the split in the 2022 LPL spring split, TES top laner Huang “Wayward” Ren-Xing has had a down split. On the other hand, EDG’s Li “Flandre” Xuanjun is playing the best League of Legends he has played all year. If Flandre continues to play at an elite level, the top lane may be the difference.

TES: the path to victory

TES and EDG match up well with each other; both teams are basically evenly matched in every lane. However, where TES has a significant advantage is in the jungle; the newly crowned league MVP Gao “Tian” Tianliang has been the best jungler in the entire league throughout the summer split while EDG’s jungler Zhao “Jiejie” Li-Jie was benched earlier in the split due to poor performance. Although Jiejie is playing much better as of late, if Tian plays at his peak, it might not matter how well Jiejie plays.