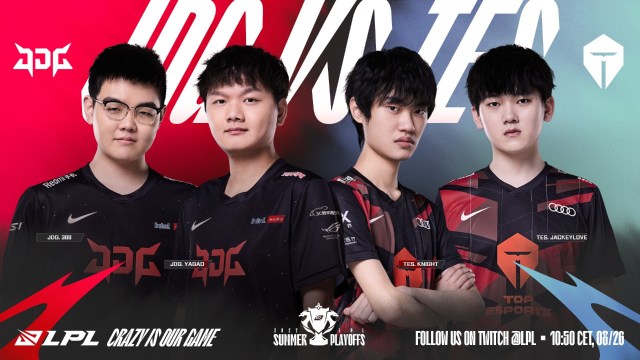 Provided by @lplenglish Deja Vu as JDG and TES square off again for the second time in as many weeks but this time its for the LPL crown.

In a rematch of the 2022 League of Legends Pro League summer upper bracket finals and the 2022 LPL summer finals, Top Esports and JD Gaming will meet once again but this time it will be for the LPL crown.

The 2022 LPL Summer finals kick off on Thursday, September 1. Here is an in-depth look at how each team got to this point and what each team needs to do to win the Silver Dragon Cup.

TES and JDG entered the 2022 LPL summer playoffs as the top two seeds after overpowering the competition consistently throughout the summer split. Both teams finished with 14-2 records with TES barely edging out JDG in overall game score to secure the number one seed despite JDG winning the regular season series 2-1 back in Week 1.

In the playoffs, both teams won their first playoff series to meet each other in the upper bracket finals as both teams put on one of the best series in all of League pro play seen all year. After going down 2-0, JDG came roaring back against TES to pull of the reverse sweep.

But TES were not deterred as they were pushed to the lower bracket while JDG awaited their opponent in the grand finals. In the losers bracket finals against Edward Gaming, the team that TES went to Game 5 with at the start of TES’ playoff run, TES dismantled them sweeping the series in three quick games to set up the penultimate rematch.

TES already knows what needs to happen to defeat JDG as they were just one game away from not only beating JDG just a week ago, but were one game away from a convincing sweep. TES needs to play like they did in Games 1 and 2 instead of Games 3 through 5.

When looking at what went right in the first two games, TES won in significant part due to TES’s bot lane led by Yu “JackeyLove” Wen-Bo. In the first two games of the series, Jackeylove picked up both player of the game honors by going a combined 23/4/14 on Zeri and Draven as he completely took over those games.

The problem was that later in the series when he didn’t have the same impact he did in the first two games. The series may come down to whether Jackeylove can play at his peak the entire series. Against a much tougher bot lane against Park “Viper” Do-hyeon and EDG, Jackeylove did indeed play at his peak when the team needed to.

JDG have the path to victory already laid out for them — literally. Of course, it won’t be easy to replicate the exact steps since their series win earlier in the 2022 LPL playoffs involed pulling off a reverse sweep. It’s probably not wise to bank on that again but instead. JDG can look at what happened in the later part of the series.

Outside of keeping Jackeylove in check, JDG won their last series by not only keeping Jackeylove in check but preventing Zhuo “knight” Ding and Gao “Tian” Tianliang from taking over the game. When looking at the best players on JDG, people often point to Seo “Kanavi” Jin-hyeok and the LPL all-pro top laner Bai “369” Jiahao and those players of course will be important as both of them picked up two of the three player of the game awards on JDG’s way to their win.

But it’s the Game 5 hero that will need to punch above his weight class once more. Zeng “Yagao” Qi isnt a household name in the professional League but is essential to JDG’s success. Going up against the LPL 2nd all-pro mid laner Knight, Yagao clutched in Game 5. He will need to play even better this time around but if JDG’s supporting cast can step up and allow Kanavi and 369 to cook, JDG will head into Worlds 2022 as the LPL number one seed.