Wreck-It Ralph makes a cameo in Fortnite, hints at event 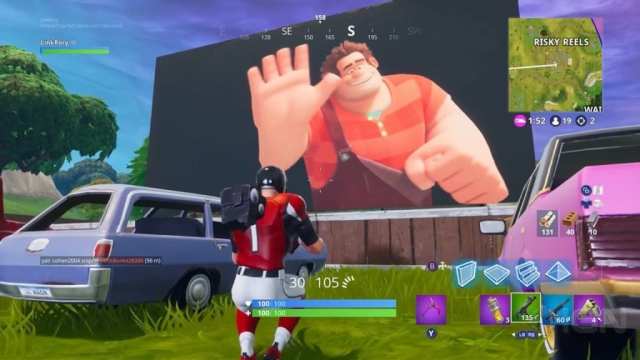 Looks like another crossover event is about to hit Fortnite. Recently spotted in the game is Ralph from the sequel to Wreck-It Ralph, Ralph Breaks the Internet. The movie just came out this past Wednesday, and rumors were already spreading that Fortnite was planning a crossover promotion with Disney. This all leads to wild speculation we could see another in-game event.

It would be similar to when Fortnite partnered with Marvel to do a Thanos event (to promote Infinity War). During that event that took place during season 4, players would literally get their hands on the Infinity Gauntlet. They then became Thanos himself. If you were destroyed, however, the Infinity Gauntlet was up for grabs by any player who got it. It was a pretty cool crossover event. While Ralph Breaks the Internet is still fresh in theaters, another cross-promotion event could possibly happen. Epic nor Disney have confirmed this yet.

Where to find him

Right now players can see Ralph on a movie screen in Risky Reels. There he simply runs up and waves at you, which is quite funny and cute, mind you. In the film itself, numerous references are made to Fortnite; Ralph does the”flossing” dance in some of the trailers actually. This marks the second time a Disney-owned character has appeared in the popular game, and Epic largely does not do cross-promotions apart from the Thanos event. For Disney fans, it’s cool to see him make a quick appearance, but we have to wait and see if this actually leads to something more than a simple cameo appearance on an in-game movie screen. Would fans be all over this like they were the Thanos event? Who knows? It’s smart of Epic, however, to capitalize on Wreck-It Ralph‘s popularity right now while at the same time giving Fortnite players an extra in-game event.