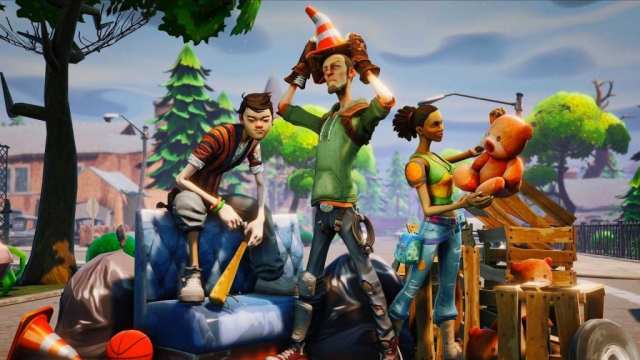 For all its successes, Fortnite Battle Royale still has a lot to learn from its older sibling, Save the World. Though Battle Royale keeps making the headlines, the game’s PvE foundation is still thriving. It receives updates alongside the PvP mode, and though more work is needed before it can leave Early Access, it already outshines Battle Royale in a number of key areas.

It’s been said that Epic has two teams working on Fortnite, with one dedicated for each mode. If Epic is interested in creating the best product possible, their teams would be well advised to learn from each other.

What is Fortnite Save the World?

Let’s do a brief recap for those of you who may be unfamiliar. When Fortnite was first revealed (way back in 2011, believe it or not), it looked far different from the current Battle Royale mode that millions of players around the world currently obsess over. In fact, there was no PvP element at all. Instead, the game was composed entirely of its PvE mode, since dubbed Save the World. At the time, once-esteemed Epic developer Cliff Bleszinski heralded the game as, “a world where you explore, you scavenge, you build, and ultimately you survive.” This iteration of the game opened the doors to Early Access on July 25, 2017, while Battle Royale didn’t come until a few months later in September.

Unlike Battle Royale, Save the World is guided by a cohesive though as-of-yet incomplete storyline, accompanied by fully-voiced characters and cutscenes. The narrative is supported by a game that, at its core, is a four-person cooperative tower defense game. Players complete missions across randomly generated maps, collect resources, save survivors, build, and protect their base against endless waves of Husks (essentially zombies).

Despite the drastic shift from Battle Royale, there are a number of elements and mechanics involved with Save the World that seem universally applicable. Let’s dive in.

As of Season 4, when players first start the Fortnite Battle Royale, they are greeted by a brief introductory cinematic. Last season, this cinematic detailed the collision of the meteor; this season, players see the zany results of the new temporal rifts. What this cinematic doesn’t do, however, is help prepare new players for what they’re going to actually do on the island. While they may know some of the backstory or lore behind the mode’s underlying narrative, they have no indication of how to play the game. From here, players are expected to select a mode, drop in, and figure things out as they go.

Compare this to Save the World. Though this mode also begins with a cinematic introducing the world, the similarities in presentation end there. Players are slowly introduced to each of the game’s mechanics, with a proper tutorial going over the basics of movement, shooting, and building. While this may seem insignificant, it’s not unusual for the building system to feel particularly daunting for new players. This is especially true considering Fortnite has numerous control schemes, and defaults are not shared between the two modes. Therefore, the tutorial helps players that are new to Fortnite as a whole, as well as converts from PvP.

In a way, the swift introduction of Battle Royale serves as an appropriate summation of the overall experience. It’s akin to Dark Souls in that sense. Players start a game with little guidance and are tasked with learning for themselves. Along the way, they can expect to die, a lot. While this approach is fitting for some games, it doesn’t fit Fortnite‘s end goal of providing a fun and accessible experience for all. Granted, some players may argue that this isn’t the game’s end goal; to those players, I ask that you justify the existence of the new Season 5 golf mini-game.

Furthermore, the Playground LTM already feels like a precursor to a dedicated practice or tutorial mode. Though this mode is currently undergoing revisions, its reintroduction could signal the beginning of additional novice-friendly resources. Each day, new players want to join the firefight on the island. Save the World proves that a welcoming committee might not be such a bad idea. Epic is unlikely to add a tutorial feature mid-season, and I don’t see it as a priority for next season. Season 6 brings us to the end of 2018, so I envision Season 7 adding a tutorial to welcome fresh players into the new year.

2. Copy the End-of-Match results from Save the World

Everyone knows the goal in Battle Royale is to be the last player standing. Upon achieving this, players see a “Victory Royale” graphic pop-up on their screen. As of Season 5, this graphic is accompanied by a slick, slow-motion clip of their final elimination. But that’s it. There’s no podium showcasing the final three players, no statistics sharing who had the most kills, most assists, or who did the most structural damage. If a player wants additional information, there is a separate menu where they can view their personal match results. Or, after leaving the game’s lobby, they can view the results of other players by spectating them within the game’s replay mode. This is a terribly obtuse way of gathering data. Duos and Squads modes don’t fare much better, either, as the only statistic you can see for your own squad mates is their number of eliminations.

Though the nature of Save the World gives the mode different statistics to track, its end-of-match results are notably more enticing. Upon completing a mission, players see a screen with each member of their squad. Alongside each player’s username is their score for each of the four categories: Mission, Combat, Building, and Utility. Respectively, these categories track objectives, eliminations, structures built, and a miscellaneous category that includes resources mined as well as involvement with in-game events. A similar system that highlights Eliminations, Assists, Revives, and Utility is an easy fix to give Battle Royale more depth.

Prediction: More in-depth results by the end of Season 5

Although the core of Fortnite Battle Royale will always be to achieve a Victory Royale, Epic needs to place more attention on the other aspects of the game. Not only will this bolster the game’s appeal for casual players, but it will also directly build upon the title’s esports viability. As evidenced by the first round of the Summer Skirmish, spectators need more than just a final victory to hold their interest. More emphasis needs to be placed on factors such as eliminations and assists, and this integration can begin with a revamped match results screen.

Fans are already sharing mock-ups of how they envision the victory screen should look. Clearly, though not game-breaking or urgent, this is an area that needs attention in the near future. With the constant pressure of strengthening the perception of competitive Fortnite, Epic is likely to implement a new system sooner rather than later.

3. Bring over the melee weapons from Save the World

One of the clear advantages that Save the World has over Battle Royale is the sheer variety in terms of weapons and traps available. While Battle Royale has an ever-expanding arsenal of choices, many of these items are merely adjusted ports of gear already found in Save the World. Of course, the inverse is also true, as some items make their way to Battle Royale first, like the Drum Gun. The problem is that it’s difficult to balance a weapon for both PvE and PvP play. This issue is not Fortnite-exclusive, as other games with both modes, such as Destiny, also often deal with balancing issues.

One example of a former Battle Royale item is the electric trap. Included with Season 1, this trap cackled with electricity prior to zapping unsuspecting players. However, while AI-controlled Husks may not notice the tell-tale buzz, players are another story. As such, the trap was far less useful than its spiky counterpart, and was thus removed.

However, Battle Royale needs to be bolder. We have weapons that shoot, spray, and explode. Our traps can bounce, impale, and heal. Items are constantly tweaked, added, and vaulted to fit the ever-changing meta. What we don’t have, however, is any sort of melee weaponry. Save the World uses a class-based gameplay system, and some characters receive significant boosts to their melee output. This, combined with the fact that enemies are rather lifeless, means that getting in close to attack is actually possible. While swords would require significant adjustments to fit the Battle Royale landscape, there are a few ways in which they could work.

Of the suggestions thus far, this one is the greatest stretch. The current gameplay meta of Fortnite Battle Royale has no room for melee weapons. Currently, the only similar mechanic belongs to the Harvesting Tool. By default, this is a pickaxe that deals a paltry 10 damage with each swing. For close-quarters combat, there are numerous submachine guns and shotguns for players to utilize. In their current state, these items would shred melee players before they could even get close enough to swing. As such, if Epic is interested in incorporating these weapons, the core balance of the game needs to shift.

While this may seem too drastic of a shift, this is exactly what Epic uses their Limited Time Modes for. Examples of previous modes include matches where every gun was of Epic rarity, resulting in lightning-fast firefights, as well as a mode that limited players to using shotguns and jetpacks. When Epic teased the first images for Season 5, part of me hoped for a feudal Japan-themed area. It’d be perfect for a samurai LTM. Though no further rumors or evidence support this, the “worlds collide” historical mash-up theme of this season gives me hope.

The following suggestion is more subjective than the others. Currently, the PvP crafting system is fairly simple. Players destroy elements of their environment, gather materials, and build basic shapes. This allows new users to quickly place a ramp or wall, while veterans can rapidly edit complex towers. In turn, crafting grants users new avenues for traversal and defense. However, this does not extend beyond structures.

In Save the World mode, crafting also includes weapons and traps. Players still gather materials the same way, albeit with the option to “Search” objects in addition to smashing them, and build structures as they do in PvP. Furthermore, each object looted provides unique resources, such as twine or specific metals, and these items can be combined to craft new weapons, traps, or ammunition. This additional layer of depth to the crafting system, though often frustrating, can yield frantic results. I think back fondly on multiplayer in The Last of Us, which featured a slower pace, and crafting new weapons could turn the battle in your favor. Obviously, including this crafting depth to Fortnite Battle Royale would change the tone and pace of the game. It’d certainly be interesting.

Well, there you have it. Of all the mechanics piled into Save the World, these are the three that would benefit Battle Royale the most. However, the two modes are very different, and we’ve barely scratched the surface. Agree with our choices? Disagree? Save the World is 50% off until July 30, so try the mechanics yourself and let us know your thoughts below. In the meantime, keep watching our page for coverage of each week’s Fortnite Battle Pass challenges and Summer Skirmish results.