Ssumday signs with 100 Thieves for another two years - Upcomer

Ssumday signs with 100 Thieves for another two years 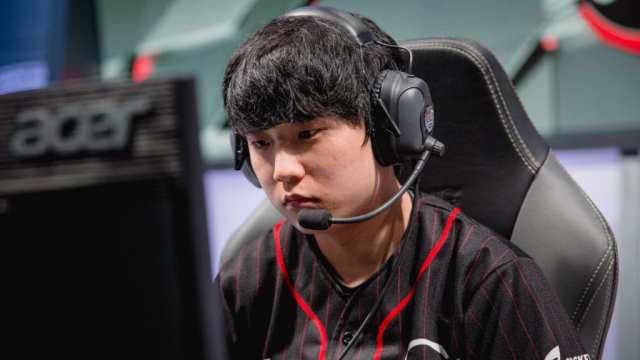 After a tumultuous 2018, 100 Thieves finally has some good news to share to its fans. Star top laner Kim “Ssumday” Chan-ho will be staying with the team until 2020.

We’re thrilled to welcome back @Ssumday on a 2-year extension. #100T https://t.co/E2Iuqne4MD

Many people weren’t sure about the future of Ssumday on 100 Thieves. Given the way their season would end at Worlds this year, fans believed that he would return to Korea. However, with a succinct one-minute video, 100 Thieves would alleviate those concerns. Ssumday would say in the announcement, “Hello, I’m Ssumday! My name is Chan-ho Kim, and I am 100 Thieves top laner!”

Fans were linking Ssumday to multiple different teams across the sea, in South Korea. With the huge Korean roster shuffle happening, no one would have been surprised to see Ssumday join a Korean organization for 2019. With so many lineups shaking up and revamping their look, Ssumday could have been a great signing. For example, multiple fans were murmuring about a possible Korean homecoming with SKT T1.

Imagine the potential of a lineup with Ssumday, rumored jungler Han “Peanut” Wang-ho, and superstar mid laner Lee “Faker” Sang-hyeok. It could have been a lineup that would have saved the legacy of both SKT T1 as an organization and Faker’s as the greatest player to ever live. However, it looks like Ssumday is committed to the future of 100 Thieves, and believes in their plan for the 2019 year.

A Look in the Past

2018 was a cruel year for 100 Thieves, who would experience both some great highs and the lowest lows. In the 2018 Spring Split, the brand new NA LCS organization would finish first in the regular season. Although they would lose in the Grand Finals to Team Liquid that split, it was a promising sign for a budding new team. Many people had very high hopes for the roster, especially with their combination of great veteran players and young talent.

However, their summer and Worlds run would be a completely different story.  Although they would start off the split well, they would falter nearing the playoffs. Also, the team would end up leaning on Ssumday for a majority of their games. They would end up finishing in third place for the regular season, and would lose to Team Liquid in the semifinals. In the third place match against TSM, they would lose too, completing their fall from grace.

Fortunately for them, they would acquire just enough Championship Points to qualify for Worlds as the second seed of the region. However, Worlds would bring an even worse showing from 100 Thieves. The team would have the worst showing out of any North American team, with a 2-4 record. They would not put any sort of fight against the other top teams in their group, only taking games from the LMS’ MAD Team. The team simply looked unmotivated and outmatched by KT Rolster and Invictus Gaming.

Ssumday is a great piece for Matthew “Nadeshot” Haag to be building around. He has proven that he is arguably the best top laner in NA, and is an MVP caliber player. Should they find the right players to compliment Ssumday and take away some of the weight from his shoulders, 100 Thieves could propel themselves to the top of the league again.

What are your thoughts on Ssumday signing with 100 Thieves for two years? Let us know what you think in the comments below! If you want more League of Legends coverage, check us out here!