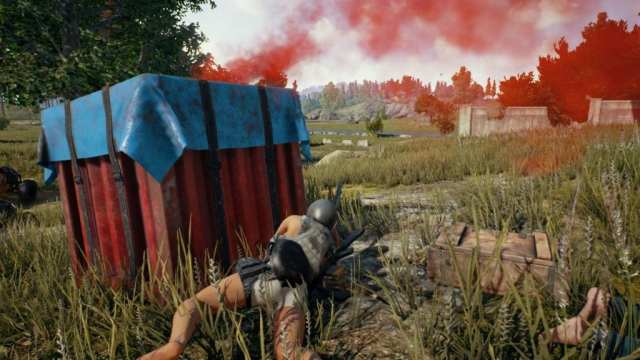 Airdrops in PUBG supply players with a variety of loot and it may seem like a difficult task looting the crate. However, the following guide will teach you everything you need to know about safely approaching and looting an airdrop.

The basics of airdrops

First things first, you need to identify the landing of the airdrop. The first airdrop of the game will always fall within the first white circle.

The landing position of the airdrop is entirely unpredictable as it could land out at sea, on land, or on top of a structure. That said, the airdrop falls from a cargo plane, so you can use your sound and vision of the plane to identify the route and hunt down the airdrop.

The following airdrop will land within the blue circle. This is much more dangerous as players will be arriving into the white circle, as well as the blue circle reducing to the next area.

If however, the airdrop is within the blue circle but out at sea, players have a much better chance of surviving due to bullets not taking impact into the water.

Approaching an airdrop is the most difficult task of them all. Firstly, you need to locate the crate which is perceptible by a red flare which emits once the crate has landed.

From personal experience, I would advise that you NEVER run straight to the crate without looking. It is much better to stay back for two to four minutes and confirm that no other player is running straight towards the crate.

Just before setting off to take the loot, check each surrounding tree, wall, building, window, and make sure no other players are watching you. If you do spot an enemy, either shoot them straight away or loot the side of the crate where they are least likely to spot you. And make sure to be quick!

These tips may not work every single time as some players may rush straight to crate whereas other players may sneak up on the crate. I am merely stating useful tips from my experience that are most likely going to get you to the crate safely.

The following video guide created by Doctor Paully is a prime example of the typical scenarios that face airdrop hunters and it may cover areas in more detail.

Using a vehicle to approach the airdrop

Using a vehicle is a simple and useful method to loot an airdrop. It is very effective as players can speed up to the crate, jump out for ten seconds, and drive off.

Personally, this is my favourite method for looting crates, but be aware of players that will unleash an entire mag into your car aiming to blow it up.

Alongside the safe and loud approach, there is also the stealth approach. Approach the crate as you would normally but then throw a smoke bomb next to it. Not only will this confuse surrounding players but it will also give you a much swifter exit than just running away from the crate in the open.

As stated previously, using a vehicle or making observations of the surroundings are the most effective methods of approaching an airdrop. However, now you need to loot the airdrop and get back to the action.

Personally, I wouldn’t loot a crate unless you have developed a suitable looting speed. You can practice looting by landing in large areas such as Pochinki, Bootcamp or Los Leones. Or, wait a few more weeks for the new practice mode!

Having a fast looting speed is very beneficial to getting out of the area alive, simply because other players may be hunting down the crate as you are looting.

I will cover the contents and damage values of the weapons that are exclusive to airdrops in a future post, but until then, you can check out our other PUBG coverage here, and if you enjoyed the guide, make sure to let us know in the comments!