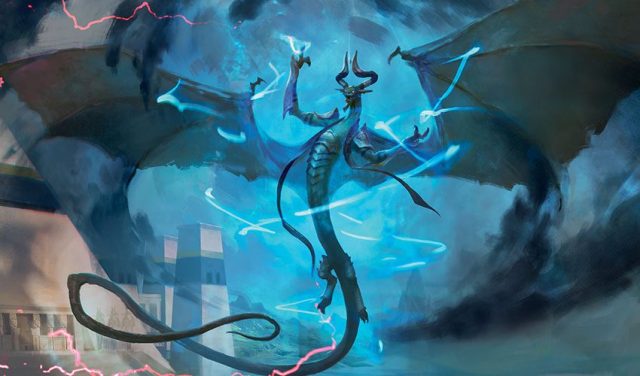 Before the Magic: The Gathering War of the Spark spoilers began, Wizards of the Coast gave us stained glass images of the 36 Planeswalkers we would see in the set. Once Davriel Cane and The Wanderer were spoiled, we knew the identity of every one of those Planeswalkers except for one: the blue-white walker. Well, a leaked poster has now revealed that the final Planeswalker’s name is Kasmina.

In short, we know nothing about this Planeswalker besides the fact that she looks blue or white-blue oriented. Initially, people thought it may be the Planeswalker version of Lavinia, though the hair doesn’t quite match. She could be a student of Teferi’s, an Azorius lawmage that has ascended to the next level. Maybe she’s just straight up from a different plane. This is one character we haven’t seen or heard anything about.

However, that’s beginning to change. We now have an image (courtesy of reddit user nathan_thegamer) of a War of the Spark promotional piece that is formatted like a movie poster:

Here, in the fine print towards the bottom of the poster, we discover a few things. First, the poster confirms what we already suspected: The Amonkhet gods really are returning as Eternalized zombies in War of the Spark.

Then as we read through the names of all the characters we already know, we come to one we haven’t seen before: Kasmina.

With Teferi already spoiled as the rare blue-white Planeswalker for War of the Spark, it’s a pretty safe bet that Kasmina will be uncommon, like Davriel or The Wanderer. As far as Magic: The Gathering lore goes, Kasmina is not a name that rings any bells. This means she’s going to have her own story that may come into play during War of the Spark. Maybe even during the sets that come after it.

Whatever the case may be, we’re excited to see how it all plays out. With the Amonkhet gods coming soon, and many other goodies I’m sure Wizards of the Coast has in store for us, there’s a lot to look forward to.