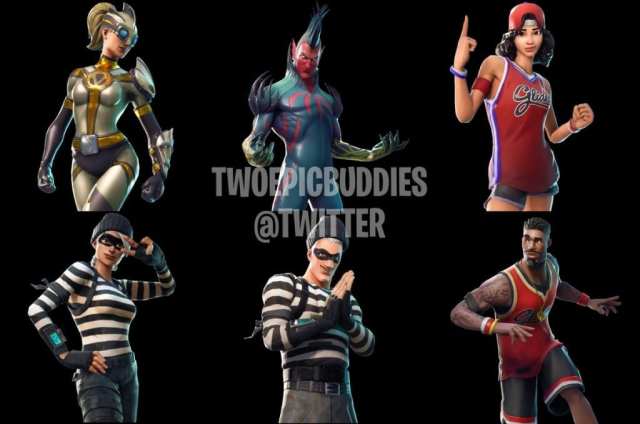 New Fortnite skins, emotes, back bling, gliders, and pickaxes have just been leaked. These come as part of a datamine by @TwoEpicBuddies, a popular battle royale-focused Twitter account. In the aftermath of this week’s update to the game, crafty users have already extracted the next wave of content. This has become par for the course in Epic Games’ smash hit. Previous leaks revealed content such as the jetpack and the limited-time competitive playlist, both unveiled weeks prior to their official announcement. The latest leak includes Season 4-themed items, gear for sports fans, and a fun surprise from a fan suggestion.

Six skins have been leaked and will likely be made available in the game’s store over the upcoming weeks. Two of the skins stay true to this season’s “heroes and villains” theme, with one of them being a female variant of the previously-released Venturion skin. Meanwhile, the “villain” skin is a previously-unseen creation. He appears muscular and ominous, with red-tinged flesh and dark spires billowing from his hair and shoulders. This continues Epic’s vision of creating entirely new heroes and villains, rather than relying on existing tropes or licensed characters.

For sports fans, there are two basketball themed skins, likely in anticipation of the upcoming NBA finals. It’s nice to see Epic taking inspiration from the larger sphere of pop culture, just as they did with the Avengers: Infinity War-themed limited time mode. The final two skins of the leak are a male and female burglar, and they are the latest in Epic’s tradition of honoring their community’s suggestions. All we need now are law enforcement skins and we’ll be able to play cops and robbers. In the meantime, can anyone recreate scenes from any superhero films?

Boogie down with the new emotes, coming soon

Meanwhile, four emotes grant players some new options for celebrating their victories or taunting their opponents. You’ll soon be able to twirl a basketball over what remains of your downed enemies or laugh when witnessing peoples’ inevitable mishaps with the shopping cart. Personally, I’m looking forward to the video opportunities these emotes will provide. People have already been creating interesting content using the game’s replay feature, and the inclusion of the laugh emote in particular should help flesh out the storytelling capabilities of the game’s engine. With all of the movie sets spread across the map, I envision a combination of the popcorn emote and the laugh emote will be useful. Home movies, anyone?

Fresh back bling, gliders, and pickaxes

Last but not least, there is also a large array of back bling, gliders, and pickaxes. Two of the back bling items include a briefcase with what look to be heist tools, such as a grappling hook and blueprints, as well as a large safe. It can be reasonably assumed that these will accompany the burglar skins, and a framed painting glider completes the set. Not to be outdone, there is a matching pair of basketball hoops for the new ballers. The female Venturion has a staff with a golden owl, and the villain has menacing floral items resembling a Venus Fly Trap. As before, the relevant back bling is included with skins purchased, but the gliders and pickaxes are separate. The price values and tiers have yet to be announced.

In the usual post-patch process, the Fortnite servers went down for maintenance this morning, but have since returned. Have you been enjoying the new features from this week’s patch? Which of this leaked content has you most excited? With fresh challenges coming soon, it’s the perfect time to grind for the precious V-Bucks you’ll need to afford these skins. Let us know what you’re working toward and we’ll see you on the island!