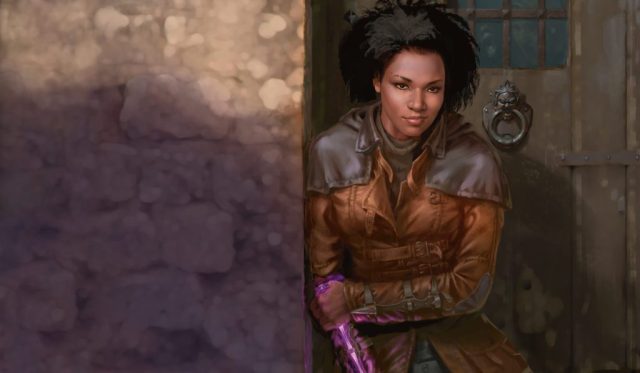 Today brought about many cards that had major story implications for War of the Spark. One of these spoilers was for this highly-anticipated enchantment card, called Oath of Kaya.

Most players will recognize the format of this card as an Oath Enchantment which first appeared in the Oath of the Gatewatch set. Each oath depicted a Planeswalker taking an oath to help others in need. The first cycle of oaths included an oath for each color, excluding black. These first cards laid the groundwork for what an oath does.

Each oath has two abilities: an enter the battlefield trigger and an ability that ties into Planeswalker control. This latest oath shows the induction of Kaya into the Gatewatch. The original posting of this spoiler came with a quote from Kaya. The quote appears in the upcoming Magic novel, War of the Spark.

Oath of Kaya, as discussed previously, has two different abilities. Beginning with the enter the battlefield effect, Oath of Kaya deals three damage to any target and it’s owner gains three life. This effect is similar to that of Death Grasp and Harsh Sustenance.

The second ability comes into effect if you control Planeswalkers. Oath of Kaya states that if an opponent attacks a Planeswalker you control with one or more creatures, the card deals 2 damage to that player and you gain 2 life. This is a rare trigger in Magic: The Gathering. In fact, only one other card so far, Ever-Watching Threshold, triggers when Planeswalkers are attacked.

How to Utilize the Card

Like all oath cards, Oath of Kaya is best when supporting any Planeswalkers you control. The enter the battlefield effect is a good way to deal with problematic creatures or other Planeswalkers. The real power of this card, however, comes from when an opponent attacks your Planeswalkers. Pair this card with other effects like Lightmine Field and War’s Toll to ensure your opponent is attacking and losing out on those attacks.

Boosting the damage and healing of this card through cards like Sanguine Bond and Exquisite Blood will improve the effectiveness of this card even to win-condition levels.

Oath of Kaya has a lot of potential in many formats. With the increase of the number of Planeswalkers in Standard, this card should see a great amount of play as a protection spell for many of the weaker Planeswalkers in the set.