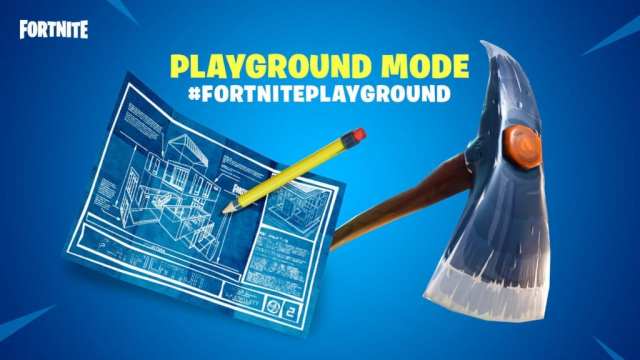 The Playground LTM is finally open for business! Alongside a bevy of other additions and changes, Fortnite is receiving a limited time “Playground.” This mode alleviates the stress of standard matches by allowing squads to practice their skills over the course of an hour. Epic Games routinely updates Fortnite with limited time modes, which helps add variety to the popular battle royale game. Aside from the regular balance changes and tweaks to the map, these modes allow both the developers and players to experiment with new gameplay styles.

I’ll say it: Playground LTM is, thus far, the most important addition for the long-term success of Fortnite. And I’ll stand by that statement until a ranked mode is introduced. This mode is huge for competitive Fortnite and I wouldn’t be surprised to see it become a permanent option. Allowing players to practice strategies, especially building mechanics, will foster the growth of new legions of players, furthering the development of the game’s community.

Changes outside of the Playground LTM

Though significant, the addition of the Playground is not the only major update in this latest patch. Continuing their tradition of listening to player feedback and requests, Epic is also introducing dual-wielding pistols. These pistols are available as both Epic and Legendary items and deal 41-43 base damage. Both pistols fire simultaneously. Unlike the standard pistols, these weapons do not use first shot accuracy. Not mentioned in the patch notes is the new drinking game Epic has inadvertently introduced: take a shot every time you see the John Wick skin using these dual pistols.

Aside from these changes, Epic also implemented a cosmetic change to the Grenade Launcher. To welcome the warmth of summer, players can now light up the sky with the Fireworks Launcher. This is similar to how there were pumpkin rockets for Halloween and egg grenades for Easter. Furthermore, a new Final Fight LTM has been added as well. This mode spices up the standard battle royale formula by pitting teams of 12 against each other.

Of course, there is a wealth of balance updates for existing gameplay mechanics as well. Shotgun damage to structures has been reduced by 50% for the pump and 25% for the tactical and heavy variants. First shot accuracy was removed for Tactical SMGs, while base accuracy was boosted by 25%, as well as a 10% boost for the Silenced SMG. Epic is also adjusting the current meta of the game by changing how edit-peeking works. A popular tactic exhibited at the recent Pro-Am tournament, a new limitation aims to balance the mechanic.

All in all, it’s a pretty good day for Fortnite fans. Players have eagerly awaited the Playground for a long time, and though the mode will likely see further tweaks, it sets a great foundation for teams to train.