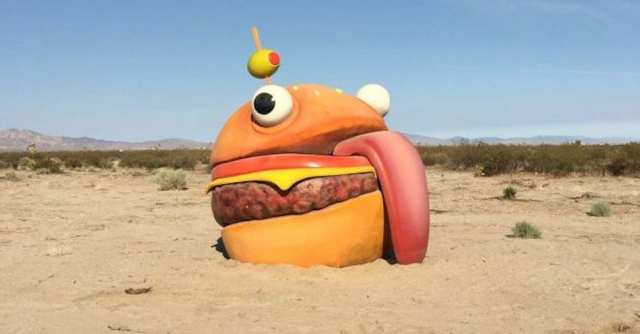 I once told the world in a previous posting that Fortnite was a game of theatrics. That has been consistently proven true by new developments within the game’s landscape. This time, however, Epic potentially brought theatricality to the real world through a genius marketing strategy. Yesterday, Twitter user Sela Shiloni posted a sighting of the strange burger mascot from Fortnite’s own burger joint, Durr Burger. Under the beaming sun of the desert, there the cartoony, googly-eyed burger sat plainly as day. It left Sela Shiloni and the rest of Fortnite fandom scratching their heads. What could this possibly mean? Is Epic trying to tell us something?

What…. is this… I’m in the middle of the desert why is this here??? pic.twitter.com/oTMiGc0Wno

Let’s look at the facts. On June 30th, a one-time event rocket launch occurred across all platforms and games being played at 10:30 p.m. Pacific Time. To summarize the event, the rocket launched just outside of Snobby Shores and ended its journey leaving an enormous crack in the sky. The crack is believed to be an interdimensional rift that will be the gateway for season 5 of Fortnite. Consequently, it will have an effect on the game’s environment.

Small portions of the colorful Fortnite map disappeared into smaller rifts include several signs. In addition, another object that seemingly disappeared is none other than the mysterious Durr Burger mascot that appeared in the California desert. To make this phenomenon even more bizarre, Shiloni posted a video of the burger mascot that included a replica police car and a sign that warned of a nearby anomaly.

DooM Clan, an esports group, took it upon themselves to see the Durr Burger in person. Subsequently, they livestreamed their findings. The clan noted on Twitter that a person at the site of the Durr Burger mascot handed them a business card. At the time, it was hard telling what the card could possibly be used for. Another Twitter user, A2K K1Lo, also visited the site and shared a picture of the opposite side of the card. On the back, a phone number was listed. Dialing the number will produce a version of the sound players hear when an object disappears through a rift. Coincidence? Likely not. Check out the tweets below to see all the details for yourself.

Checked out the burger head in the desert. This is what was here guy gave me a card too. pic.twitter.com/NuMMGgDqbb

The agents card as requested pic.twitter.com/CgxXrXYj8S

What Does it Mean for Fortnite’s Fifth Season?

Surely, some extravagant marketing campaign is afoot to usher in the fifth season of Fortnite. Could the burger’s appearance in the desert elude to a possible desert setting in-game? Or is the usage of the interdimensional rift signaling a potential feature to be utilized by players in the next season? Whatever the case may be, the Durr Burger mascot appearing in the desert is viral marketing at its finest.

What are your thoughts on the Durr Burger appearance? Do you have any predictions regarding how this event might relate to season five? If so, be sure to let us know in the comments below. And for more news on Fornite, be sure to check here!