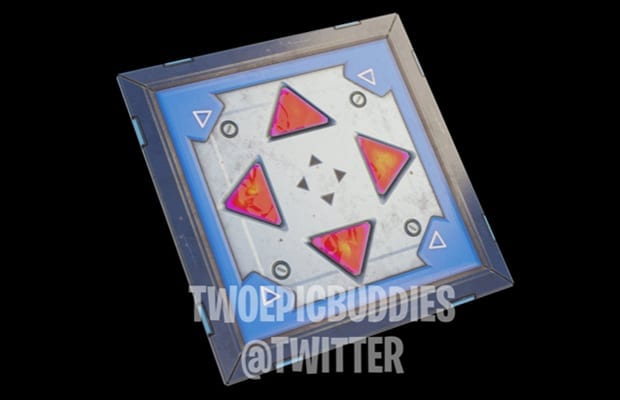 Update: As of Monday, June 4, bounce pads are confirmed as returning to Fortnite. This information appears in the weekly game update, in which the items are now called bouncers.

In yet another Fortnite leak, new rumors point to the return of the bounce pad trap. This follows the batch of skins and other cosmetics from the datamine this week. Earlier today, Twitter user @TwoEpicBuddies posted a picture of the once-removed item, citing its imminent return. They also claim new functionality, stating:

The bounce pad is coming back. Can be placed on walls, roofs, and the floor. It also boosts you when you hit it with the shopping cart!

This differs from the item’s original implementation, which could only be placed on floor tiles. Considering that some of the cosmetic items leaked by @TwoEpicBuddies have already been added to the in-game store, it seems a fair bet that their bounce pad intel may be correct as well.

History of the bounce pad

Most new players likely will not recognize that the bounce pad is actually an old item. Introduced with Season 1 of the Battle Royale mode, these pads were placed like traps and allowed players to bounce either vertically or in a fixed direction. They were removed shortly thereafter and eventually replaced by the current circular launch pads. The key differences between these two items is that the bounce pad hurtled players in a fixed direction, whereas the launch pad sends players higher into the air and with more control. In essence, the bounce pad is more of an immediate item, useful for quickly traversing within one location. This is in contrast to the launch pad, which is intended more for long-distance travel.

Though removed from the game, the bounce pads are still visible in the first trailer for Fortnite: Battle Royale. Skip to the 0:28 mark to see the old “directional” design. The item is showcased alongside other relics from the game’s past, such as electrical traps. Epic Games is quick to add new features to their popular game, but they’re just as quick to remove them. If the bounce pad does make a return, it could signal a bright future for other items that have been shelved. Perhaps we’ll once again see tweaked versions of guided missiles, smoke grenades, or electrical traps.

The future is sky-high

The revival of the bounce pad shows that Epic Games is willing to revisit concepts that don’t work the first time. With their original implementation, the timing simply wasn’t right. Now, however, there are numerous items that allow players to travel more quickly. Items such as jetpacks, hop rocks, and the new shopping carts all provide players with new opportunities that weren’t available in Season 1. The results of combining these items is yet to be seen, but the possibilities are inspiring.

Further still, players weren’t exactly quite sure what they were doing back when the game first came out. Now, even average players recognize the importance of building. Even controller users are pushing the boundaries of how quickly they can alternate between building and shooting. If bounce pads return, they will add a new layer of depth to tense build-offs between players. Because of the increased familiarity with the game, they will likely see more use than when they were first implemented. This is highly dependent on what the drop rate for the item is. If anything less than epic rarity, players may be willing to more freely place a bounce pad rather than the current epic-rarity launch pads.

However, keep your expectations in check. As mentioned in Epic Games’ patch notes, the directional jump pad is still available and receiving tweaks in Fortnite‘s other game mode, Save the World. It’s unclear whether @TwoEpicBuddies datamine pulls content from both modes or just battle royale. While it’s very likely that an updated version of the pad will make its way back to battle royale, the possibility remains that the image is just an asset from the cooperative campaign. Regardless, we’ll find out soon enough.