FIFA 18’s Calcio A Team of the Season: TOTS Review 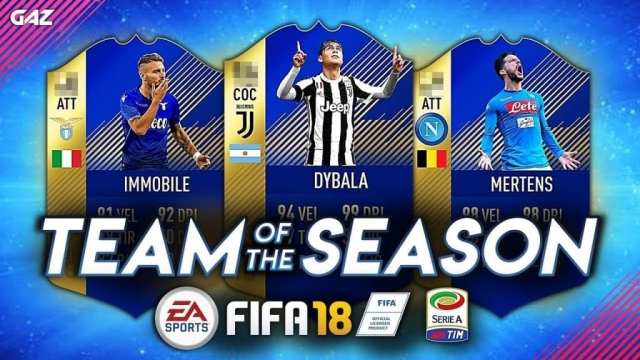 Earlier this week I took a look at FIFA 18‘s TOTS (team of the season) for the English Premier League. Today, I get to take a look at the newly released Calcio A (Serie A for those who don’t know. Stupid FIFA and their licensing problems) TOTS. Spoiler alert, the Serie A is my favorite league. Which means that I spent all of this year (and my whole life) watching this league and the players in it. So, if you’re questioning my credentials when it comes to Italian soccer… you’ve been told.

Got it? Good, and since you understood, let’s take a look at FIFA 18′s Calcio A TOTS.

For the most part, I have no problems with the squad selection. Pretty much all of the players who are mentioned, deserve to be there. With that said, there are a few exclusions that took me by surprise:

Now the players listed above all had great years and should’ve been included in the list but I don’t blame EA Sports for leaving them out. Actually scratch that. Jorginho and Verdi should definitely be in the squad, with Iličić and Chiesa coming out. Also, Higuain with a rating of 97 is a little much. But besides all that, the squad gets my approval.

Now onto the official starting 11, in the minds of EA Sports.

Below is the starting 11, re-created by me on FutHead.com

Opting with a 3-5-2 formation. A staple for the Calcio A. FIFA 18‘s Calcio A TOTS starting 11 is pretty accurate. Most of the players in the starting 11, you could argue, deserve to be there. There are some question marks though.

Inter’s starting goalie, has been consistently one of the best goalies in the league. Playing in every game this year, Handanovic earned 17 clean sheets. While only allowing 30 goals. Pretty good stats if you ask me. The problem is that this year, a goalkeeper by the name of Alisson stole the show. In his first season as Roma’s number one, Alisson played in 37 league games, earned 17 clean sheets and let in 28 goals. Another excellent season. So good, that Alisson has now gained the attention of every top team in the world. Comfortable on the ball and capable of making mind-blowing saves, Alisson was undoubtedly the goalie of the season. He also made it into the semi-finals of the Champions League, losing 7-6 on aggregate to Liverpool. Overall, it was a very good season by both keepers. But for me, Alisson gets the nod in the starting 11.

To be honest, I have no idea how Allan got himself in this starting 11. He didn’t even have the best season out of the midfielders on his own team, let alone the rest of the league. A workhorse of a player, Allan brings steel, grit and determination to any team. But did he really have a TOTS worthy year? I don’t think so. For me, Lucas Torreira or Radja Nainggolan deserve to be in the squad. Torreira was second in the league for balls won with 178, while Allan was eleventh with 140. Nainggolan tallied up nine assists this season, while Allan had five. Now, if you’re wondering who scored the most goals between the three. Well, then let me tell you. All three scored four goals this season (so that stat is useless). I’m judging that based off of individual performances, and for me, Allan didn’t have his best season. Torreira definitely did, Nainggolan had a relatively good year compared to his high standards. If it was up to me? Allan probably wouldn’t even make my TOTS squad, let alone the starting 11. This one was definitely the oddest one of the bunch, but there are two bigger exclusions.

HOW ON EARTH IS HE ON THE BENCH. Luis Alberto had arguably his best season EVER… and yet he finds himself on the bench. One of two players in the entire league to average double digits in both goals and assists (11 and 14), Alberto deserves to be in the starting lineup. You could argue that behind Immobile and de Vrij, Alberto was Lazio’s third best player. Which is remarkable considering last year, people were calling him a flop signing. He definitely turned it around. To have him out of the starting lineup is ludicrous. Now I know the starting 11 isn’t that big a deal, considering its a video game’s take. But ask any Serie A fan, and they would tell you he deserves to be in there. Regarding who he would replace, I wouldn’t hate to see either Allan, or Dybala come out (sorry Dybala, even though I’m a Juventino I have to call it as I see it.)

Now this one is another toss-up. Douglas Costa had an INCREDIBLE first season in Serie A. Scoring four goals and setting up 12 goals, Costa was arguably the best player for Juventus this season. Blistering pace, classic Brazilian flair and a smile that kills. He is another who deserved to be in the starting 11. Now, in terms of stats, he falls short to his teammate Paulo Dybala. Who scored 22 goals, while adding five assists. Clearly Dybala had the better scoring total, but Costa was vital to Juventus’ success this season. Whenever he played, he was a game changer. He brought something different to Juve’s attack and without him, Juve probably wouldn’t have won the league. Ya I know Dybala scored more goals and was Juve’s top scorer, but while his stats say one thing, his overall performance says another. Constantly linked with moves away from Juventus, the Argentinian found himself in the doghouse for much of the season. He was substituted in big games and also left out of the starting 11 in big games in favour of Costa. Its a tough choice, but for me Douglas Costa should’ve found a spot in the 11.

Well now that I’ve given my two cents, here’s my FIFA 18 Calcio A TOTS starting lineup.

FIFA 18 Calcio A TOTS by Moi

Above is my starting 11, courtesy of FutHead.com. As you can see, most of the people I made cases for found themselves in my starting lineup. Except for Lucas Torreira or Radja Nainggolan. For me, this was the best players from this past season and if this was a real team, lord have mercy. I kept the backline the same, except with the addition of Alisson. The midfield saw both Allan and Dybala hit the bench, in favour for Douglas Costa and Luis Alberto. Milinković-Savić moves inside with Pjanić, while Insigne, Immobile and Icardi retain their spots.

Hope you guys enjoyed another one of my FIFA 18 rants. If you agree, disagree or have different opinions than me, feel free to let me know in the comments. If you liked this article, then maybe you’d like more: