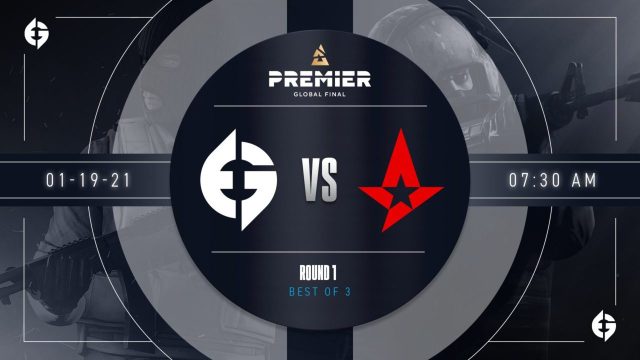 Astralis took down Evil Geniuses 2-1 on Tuesday in the opening round of bracket play at the Blast Premier Global Final.

The world’s No. 1 Counter-Strike: Global Offensive team according to HLTV looked shaky on Map 1 of the series but rounded it out with back-to-back wins to advance.

Wednesday, Vitality will play Complexity, Natus Vincere face off against Team Liquid and Evil Geniuses play the loser of G2 vs. Furia. Astralis will play Thursday.

EG started off with a 7-2 lead thanks to a slight edge in trades and strong performances from Tsvetelin “CeRq” Dimitrov and Ethan “Ethan” Arnold.

However, after Lukas “gla1ve” Rossander bailed out Astralis with a triple kill to hold banana, Astralis put together six straight wins to end the half 8-7.

In the second half, EG once again won the pistol and took five rounds in a row. However, following a timeout from Astralis, the Danish roster was able to get their first round of the second half. The map then turned into Astralis’s playground as they quickly put together four wins to tie the game 12-12.

On Astralis’s pick, Andreas “Xyp9x” Højsleth and Nicolai “dev1ce” Reedtz led the initial charge as the Danes put up seven straight rounds without an EG response. The half ended with Astralis up 11-4.

After winning the first three rounds of the second half, EG had hope. However, on the gun round, Astralis mowed down EG in a flawless effort. Despite EG getting one more on the board, Astralis closed out the map 16-8.

EG once again started hot with a 4-0 lead, despite a double team kill by Vincent “Brehze” Cayonte in Round 2. While the aggressive pace worked in the beginning, Astralis changed their setup to counter EG’s approach.

With dev1ce getting opening picks and Emil “Magisk” Reif winning crucial duels, Astralis locked EG out of the bombsites and won 11 rounds in a row while allowing only one bomb plant.

EG started the second half picking up the pistol and eco rounds but fell short on the bonus gun round. On the first real gun standoff, Astralis steamrolled EG and forced an eco leading to a 14-6 score.

However, EG were just unable to stop the Danes, with the map ending 16-6.

Zain Merchant
Zain Merchant is an Esports writer who has previously worked with Team Dignitas. He loves FPS games such as Valorant, Counter-Strike and Valorant.