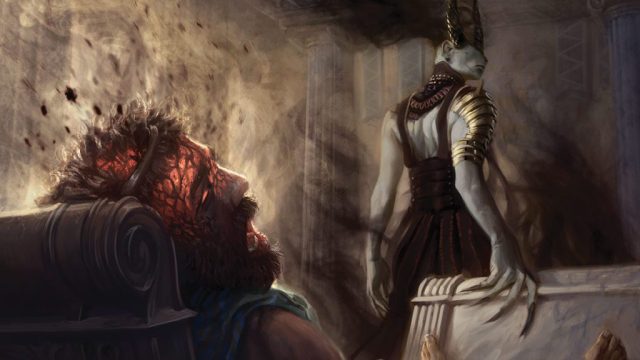 With the big reveals of Nicol Bolas and The Elderspell getting heavy coverage in War of the Spark’s spoilers today, some smaller characters have flown under the radar. Even if this next Planeswalker isn’t as important as some of the bigger card reveals, it still packs quite a punch. Ashiok, Dream Render returns from the Theros Plane.

Ashiok’s Skulker and Their Lore

Ashiok’s lore is minute and shrouded in mystery. Their Skulker, however, could give us a bit of more insight into the shadows of the Planeswalker’s past.

Ashiok in the past utilized the darker side of belief to dig into people’s minds and create a nightmare that would terrorize and kill them. This idea is represented heavily in Ashiok’s Skulker. Ashiok, Nightmare Weaver had the ability to create nightmares from cards exiled by the Planeswalker but this is the first time that we see what one of these nightmares manifests as. The ability for the Skulker to become unblockable also plays into Ashiok’s lore, where the nightmares they make are deep-rooted in the target’s beliefs and doubt.

Beginning with its static ability, Ashiok already holds its opponent hostage by prohibiting them from searching their library. This effect feels reminiscent of Mindlock Orb. The only difference is that Ashiok states that only spells and abilities that your opponents control are affected by this ability. This means that if you were to Path to Exile an opponent’s creature, they are still granted the basic land from the spell.

The real power in Ashiok, Dream Render comes from the -1 ability. This ability cements this card as an Ashiok Planeswalker. When using this ability, you choose any player in the game and they mill the top four cards of their library. Now, mill decks will love to point this at their enemies — but graveyard deck might like Ashiok even better. The ability states that it can target any player, so those Muldrotha decks could use this card to fuel their own graveyards.

The second half of Ashiok’s -1 ability also puts Ashiok at a huge advantage over other uncommon Planeswalkers. After milling someone, Ashiok then exiles each opponent’s graveyard. Just like the first half, this part of the ability flexes between two focuses. The most obvious use is that it denies graveyard decks from utilizing their biggest asset. The other, lesser-known advantage of the exile is if you use it in tandem with Kaya, Orzhov Usurper.

Both mill decks and graveyard decks will enjoy playing Ashiok, Dream Render. Esper Control may even find use for this Planeswalker. Take advantage of the mill and exile effects however you see fit.

On the other hand, Ashiok’s Skulker feels too weak to see much competitive play. It could pair with Biomancer’s Familiar to reduce the cost of its activated ability, but there are much better options in Blue/Green.

Ashiok, Dream Render looks to be the most powerful of the uncommon Planeswalkers in the set. Restricting your opponent to drawing and using the cards in their hand is already a huge advantage. Being able to thin out their decks on top of that will ensure Ashiok will definitely see play in competitive. Ashiok’s Skulker is far less impressive of a card. There is a chance, however, that it sees use in limited formats with its high toughness and unblockable potential.