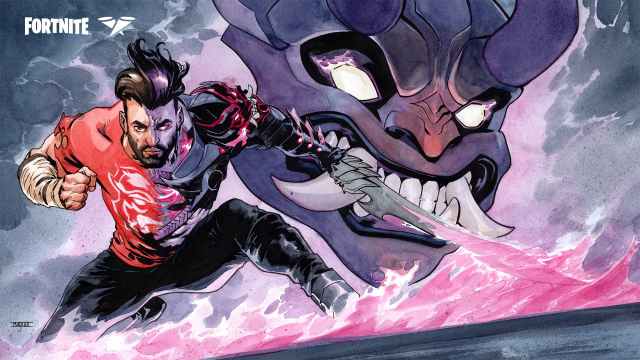 Popular Fortnite Youtuber Hassan “SypherPK” Ali and Epic Games have collaborated to immortalize Ali in the game’s Icon Series. The Fortnite Icon Series is the way real-life celebrities, athletes, and more have been placed into the world of Fortnite; here, SypherPK joins the likes of Bruno Mars, Olympian snowboarder Chloe Kim, and LeBron James.

SypherPK’s in-game outfit — and associated accessories — are themed around the Oni, a creature from Japanese folklore. His outfit will come with three styles; the default, an “empowered” style and a “possessed” style. Players will be able to further customize these styles by choosing either the Crimson or Onyx masks associated with either style.

As usual, this outfit will also bring some accessories with it to the item shop; the Oni’s Curse back bling and Sypher’s Scimitar pickaxe, which both glow with more energy the more eliminations a player gets in a match, and the Sypher’s Strut emote.

The cosmetic items aren’t the only thing Epic Games are using to recognize SypherPK’s work in the Fortnite space. Two modes are coming to the game alongside them; a Creative hangout zone/PvP free-for-all crafted by SyperPK’s Oni Studios, and the SypherPK Icon Cup (for players who want a little more competition).

Sypher’s Pit Island not only features the aforementioned hangout zone and separate free-for-all PvP zone, but will also feature quests for XP, a “SYPHER IS HERE” spray and the Oni Ascension Loading screen. This area will be available from September 18 at 10:00 AM ET until October 2 at 8:00 PM ET.

The SypherPK Icon Cup is a Zero Build tournament where players can compete to earn the SypherPK outfit and back bling before they arrive in the item shop. Players who earn at least eight points in the tournament will also receive the Sypher’s Mask emoticon. Anyone looking to compete can join up to ten matches in their region’s respective time frame in order to earn points. In order to unlock the outfit and back bling, players must eliminate others using the SypherPK Trap Tower, a new feature coming to the tournament.

Scoring for the tournament is as follows:

Each elimination will also earn players one point.