David versus Goliath for a spot in the Worlds 2022 finals 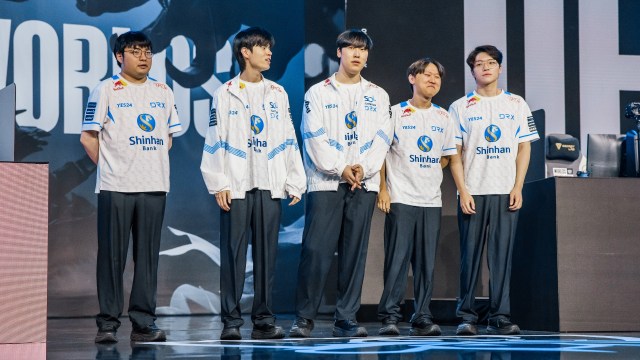 Provided by Riot Games/Getty Images/Colin Young-Wolff DRX are standing tall entering the semifinals of Worlds 2022 but they face an even taller opponent in Gen.G

A battle between the pre-tournament favorites and the CInderalla of the tournament. The second and final semifinal at League of Legends Worlds 2022 pits the League Champions Korea champions Gen.G against the LCK fourth seed DRX in a match that almost no one expected to happen in the semifinals. Here is an in-depth preview of how each team got here and what each team needs to do to win.

This is a classic David versus Goliath matchup.

Gen.G has been absolutely dominant all summer long putting a 17-1 record in the LCK regular season and sweeping their way through playoffs. At Worlds 2022, they only dropped a single game in the group stage but were pushed to the brink against DWG KIA in the quarterfinals in what could have been a finals preview. Nevertheless, Gen.G took the win to advance to the semifinals.

As for DRX, they had to make many upsets to even reach this point as the LCK fourth seed. After initially turning heads with them outplacing the 2022 Mid-Season Invitational champions Royal Never Give Up to qualify for the group stage, they turned heads once more by taking down Top Esports and Rogue to make it into the quarterfinals as the first seed from Group C. But in what is now considered one of the greatest series in the history of League, DRX pulled off a reverse sweep against the reigning Worlds 2021 champions, Edward Gaming to make it the semifinals.

These two teams have history against each other since they are from the same region. This year  alone has been all Gen.G so far with an 8-0 game record in favor of Gen.G

How DRX can win

DRX have shown all tournament that it doesn’t matter how good a team is on paper. At this level of competition, having that dog in you can erase the skill gap. DRX have played against much tougher teams on paper and have taken them all down so far at Worlds 2022. And the biggest reasons why has been because of their team coming together.

Every single player on the roster has stepped up but the biggest head-turner of the entire tournament has been their mid laner Kim “Zeka” Geon-woo. An unknown player heading into the 2022 season, let alone Worlds 2022, the 19-year-old has already put on a career-defining performance at Worlds 2022 by outplaying some of the greatest mid-laners of all time. He dumpstered RNG’s Li “Xiaohu” Yuan-Hao in the play-in stage, TES’s Zhuo “knight” Ding in the group stage and then now infamously solo killed the reigning Worlds 2021 MVP Lee “Scout” Ye-chan in Game 5 of the quarterfinals. If he plays like that against Gen.G, he can single-handedly erase a big win condition Gen.G had.

But as for the other win condition, DRX have created problems in the bot lane. With Kim “Deft” Hyuk-kyu andCho “BeryL” Geon-hee bringing out the Ashe and Heimerdinger duo, no team has been able to contest the now most potent bot lane combination at Worlds 2022. EDG looked lost trying to combat it and was a big reason why they couldn’t close the series out. If Gen.G can’t figure out an answer, and if DRX can continue to surprise people, then DRX can pull off another historic upset on their way to finals.

How Gen.G can win

While DRX surprisingly has a real win condition, its not likely. Across the board in every single lane, Gen.G is favored. While that has not mattered against DRX yet, one has to think that it will catch up to them and against the best team in the world, it’s likely to happen now.

While Zeka is a formidable opponent against Gen.G’s trump card Jeong “Chovy” Ji-hoon , Gen.G is too stacked in the other lanes even if mid-lane is a wash. Han “Peanut” Wang-ho is a former LCK MVP and is considered one of, if not the best jungler in the world. DRX’s jungler Hong “Pyosik” Chang-hyeon is not. In fact, Pyosik is the reason why DRX almost missed Worlds 2022 in the first place as he was benched for Lee “Juhan” Ju-han in the LCK regional finals.

While Pyosik has recovered and is playing well at Worlds, he isn’t on Peanut’s level. Gen.G’s one weakness is in the top lane but DRX doesn’t have a good enough top laner to expose Choi “Doran” Hyeon-joon. And finally looking at bot lane, while DRX has a good bot lane, Gen.G has the arguable best bot lane. EDG and RNG got tripped up by the whacky Ashe and Heimerdinger picks, but Gen.G’s support is Son “Lehends” Si-woo” who is known to have a champion ocean with picks like Singed. Also Gen.G has had time to prepare for DRX’s off-meta picks.

As long as Gen.G has answers to the meta in the bot lane and the rest of the team just plays at the level they have all summer long than Gen.G should be able to cakewalk into the finals.