A battle between the last LPL team standing and the goat. 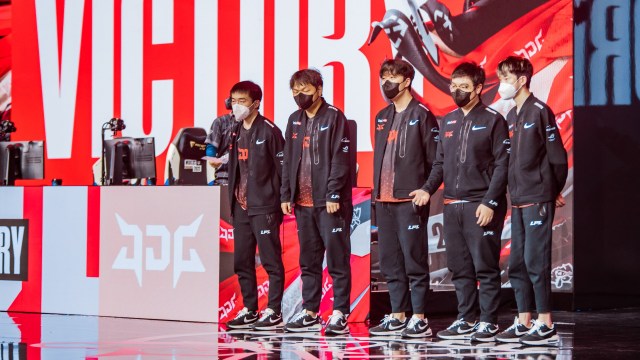 After three weeks of competition, the pool of 24 teams at League of Legends Worlds 2022 have been wittled down to four. The first of the two semifinal matches kicking off live from the State Farm Arena in Atlanta, Georgia pits the League Pro League champions JD Gaming against the League Champions Korea second seed T1.

In a match between two of the championship favorites with exciting lane matchups across the board, the two titans are bound to put on a show. Here is an in-depth previewing how each team got here and what each team needs to do to win.

Neither team has matched up against the other internationally before.

Both teams have looked nearly unbeatable so far at Worlds 2022. In the group stage, JDG only dropped a lone game to DWG KIA before beating them in the tiebreaker game to claim the unofficial best of three 2-1 and put their final record at 6-1 to move onto the quarterfinals as the one seed from group B. As for T1 they did not need a tiebreaker game to get out of Group A as the first seed but they also only dropped a single game which was a Week 1 loss to Fnatic as they finished the group stage 5-1.

Unlike the other two quarterfinals matches, JDG and T1 did not struggle at all when it came to dispatching their Top 8 opponents. JDG drew the League European Champions Rogue in the first quarterfinal match and 3-0 swept them with no game going past the 30-minute mark. As for T1, they had a tougher opponent in the 2022 Mid-Season Invitational champions Royal Never Give Up. But after a scare in Game 2 that required T1 to make a heroic comeback, T1 were still able to sweep past RNG in 3-0 fashion.

How T1 can win

T1 are entering this match with one significant advantage and that’s in the bottom lane. The once-praised best bot lane in the world during the spring split have returned to form after a mediocre summer split. Lee “Gumayusi” Min-hyeong and Ryu “Keria” Min-seok are peaking at the right time and have been the rock T1 have expected them to be in the bottom lane. As seen in the spring split and here at Worlds 2022, there has not been a bot lane that could stand up to this duo and they have played against a lot of good ones.

In fact, in Upcomer’s rankings of supports and bot laners, T1 have beaten three of the five bot laners and two of the five supports. But do you know who arent on either of those lists? JDG’s bot lane. Although a big reason why they qualified for Worlds 2022 in the first place, JDG’s duo of Wang “Hope” Jie and Lou “Missing” Yun-Feng have not been nearly as good at Worlds 2022 and have definitely not been on T1’s level.

If T1 can exploit this mismatch and get Gumayusi ahead on hyper-carry picks, T1 has a win condition that can propel them into the finals.

How JDG can win

Like T1, JDG also has a mismatch in their favor. While T1’s Mun “Oner” Hyeon-jun is a serviceable jungler, JDG’s Seo “Kanavi” Jin-hyeok is regarded as one of the best junglers in the entire world. Upcomer ranked both of them in the top five at Worlds 2022 but the gap between Oner and Kanavi might actually be bigger than the gap between the two teams’ bot lanes.

So far at Worlds 2022, Kanavi has been an absolute monster. According to Oracleselixer.com, Oner only leads Kanavi in one category which is KDA but in everything else, Kanavi is superior. He has more double Oner’s kills with just four less deaths in one more game played. He also has Oner beat in every single laning phase category like gold difference and experience difference at 10 minutes. He also has a way bigger damage share and damage per minute. Simply put, Kanavi is the main carry for JDG and Oner might not be good enough to stop him.

If Kanavi is able to play the series uncontested, JDG’s win condition of having an oppressive jungler being able to press leads would be activated. With Mid and top lane being a wash between the two teams, Kanavi is the x-factor that can push JDG to the finals.