Rematch of the MSI 2022 finals 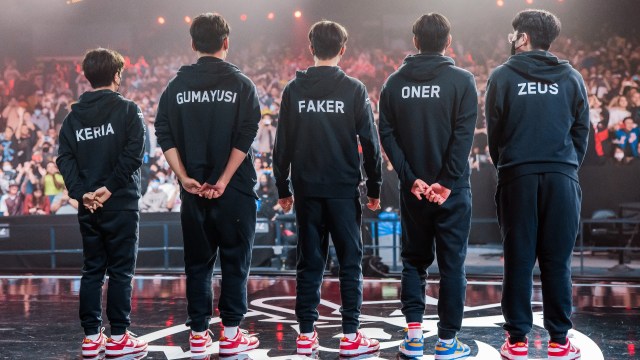 Provided by Riot Games/Getty Images/Colin Young-Wolff T1 didn't get a chance to celebrate the last time these two teams played, will they this time?

The second match in the League of Legends Worlds 2022 quarterfinals is about to commence.

In a rematch of the last major international tournament, the League Korea Champions second seed T1 is set to play against the League Pro League fourth seed, Royal Never Give Up in what is considered the best matchup so far at the world championship. In the next chapter of the most played international matchup of all time, T1 and RNG will be playing in their second best-of-five series of the year with everything on the line.

Here is an in-depth preview of how each team got here and what each team needs to do to advance.

Unlike other matchups in international play between teams going up against each other for the first time ever, RNG and T1 have a real history with each other. In fact, this matchup is the most played international matchup in the history of professional League of Legends.

Although the RNG has done better as of late, historically T1 has had RNG’s number with the win in their very first match way back in the finals at Worlds 2013 and again at the 2016 Mid-Season Invitational, Worlds 2016 and Worlds 2017. But both teams looked way different back then. As for the most recent result, RNG defeated T1 this year at the MSI 2022 finals in a close 3-2 set.

Since then RNG and T1 failed to repeat as regional champions but have looked scary at Worlds 2022 regardless. T1 is coming into this series as the number one seed from Group A after defeating Edward Gaming, a team that RNG lost to twice in the LPL 2022 summer split, while RNG is coming in as the Group D second seed after losing a tiebreaker game against Gen.G. Both teams, however, were 5-1 in group play.

How T1 can win this series

No team is a massive favorite in this series so it will literally come down to which players show up. When it comes to T1’s best performers those happen to be their top laner Choi “Zeus” Woo-je and bot laner Lee “Gumayusi” Min-hyeong. Zeus has been heralded as the best top laner not only at Worlds 2022 but in the world at large.

So far at Worlds 2022, Zeus has actually had a mix bag of games. He definitely has some standout performances like his two games against EDG where he went 10/2/4 on Gangplank and 4/1/7 on Fiora. But he also has some so-so games like his matches against Fnatic where he went 0/4/5 on Jax and 2/3/3 on Yone. Going against RNG’s Chen “Breathe” Chen who is a better top laner than any he has gone up against so far, he is definitely going to need to play as he did against EDG.

As for T1’s bot lane, they have had a resurgence so far at Worlds 2022 after a down split in 2022 LCK Summer. Specifically, Gumayusi has been the best player in the entire tournament when it comes to KDA as his 18.3 average tops all players. Although that is impressive considering the level of bot lanes he has gone up against so far, RNG’s Chen “GALA” Wei is on the same level as those players and is known to show up in high-pressure situations.

With that said, there seem to be no players that can match Zeus and Gumayusi when they get going. Although that’s easier said than done against RNG, the two players have the track record to do so, the only thing they lack is consistency. If Zeus and Gumayusi can play at their peak for the entire series than T1 has a good shot at qualifying for the semifinals for the second straight year.

How RNG can win this series

Covid woes have hit RNG which has actually put them into this matchup in the first place. With the team looking off in Week 2 of the group stage with the entire team being ill, RNG was still performing well but will need to play better if they want to beat T1. So the first step is obviously coming into this matchup healthy. If they don’t it might not matter if T1 isnt on their A-game if RNG isn’t.

But assuming the time off has allowed the team to heal, RNG has the tools to take down T1. In fact, they have already proven how to do so. Even with the roster looking slightly different with Breathe replacing Chen “Bin” Ze-Bin after their MSI 2022 win, the x-factors in that series were Li “Xiaohu” Yuan-Hao and Yan “Wei” Yang-Wei and those two will need to show up in this series.

While Lee “Faker” Sang-hyeok and Mun “Oner” Hyeon-jun are good in their own right, out of all the players on T1’s roster, those two are the most fragile. Looking at Oracleselixer.com, Wei and Xiaohu are entering this matchup with better KDA’s than Faker and Oner although slightly.

If RNG can get Xiaohu ahead and Wei is allowed to facilitate the top and bot lanes to offset T1’s strengths, then RNG will be able to move onto the Top 4 at Worlds for the first time since 2017.