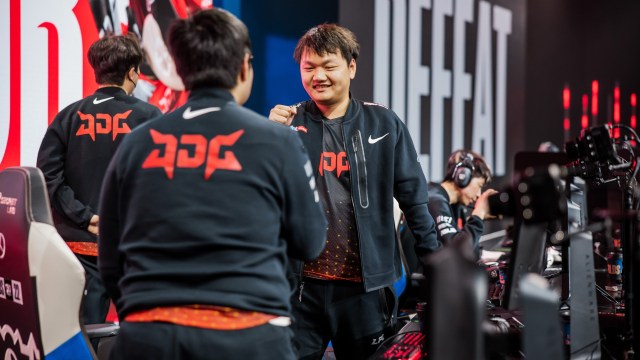 The first of four quarterfinal matches at League of Legends Worlds 2022 is about to commence. The Group B first seed JD Gaming will be taking on the Group C two-seed Rogue in the first Top 8 battle. With a spot in the Worlds 2022 semi-finals on the line, a battle between two regional champions trending in opposite directions will decide the first team in the knockout stage to move into the Top 4 and the first to go home. Here is an in-depth preview detailing how each team got here and what each team needs to do to win.

Both teams are the champions of their respective leagues; JDG came into Worlds 2022 wearing the League Pro League crown as they fended off Top Esports twice to win their first LPL title since 2020. Meanwhile, in Europe, Rogue took care of business against G2 Esports to win the 2022 League European Championship summer split. Both champions also had a fantastic first week of the Worlds 2022 group stage. JDG went 3-0 in Group B with wins over G2, Evil Geniuses and DWG KIA. Rogue did the same in Group C, going undefeated with wins over DRX, Top Esports and GAM Esports. But although JDG continued to play well in Week 2 to secure the top seed from Group B after a tiebreaker win against DK, Rogue are lucky to be in the quarterfinals.

In Week 2, Rogue only managed a single win against GAM as they were smashed by TES and DRX. And if it wasn’t for an incredible finish by GAM against TES that is still the topic of controversy, Rogue very well may not have made it out in a three-way tie scenario that they were fortunate enough to dodge.

How JDG can win the series

JDG is heading into this series as the overwhelming favorite. But with Covid woes starting to hit the team, it might be harder than expected. At the time of this article’s publishing, only their mid laner Zeng “Yagao” Qi has publicly contracted Covid and is still expected to play. If Yagao does start to feel the effects of the illness and can’t play his best, it will be up to his team to pick up the slack. Thankfully for the LPL one seed, they have weapons in every lane.

We regret to inform you that Yagao has tested positive during the routine test. Thankfully, Yagao's health is stable and is undergoing rehabilitation.

JDG is working with officials to carefully adhere to all protocols and we shall do our utmost to prioritize their well-being. pic.twitter.com/tu2ry2bnM0

Seo “Kanavi” Jin-hyeok is the heart and soul of the team and has been for many years. As one of the best jugglers in the entire world, he has the track record to carry games while also being able to play the facilitator role. But one can expect Kanavi to be a primary carry for the team, especially with Yagao’s condition uncertain. According to Oracleselixer.com, Kanavi led all junglers in the Worlds 2022 group stage in kills with 35. That is a full 10 more than the second-place jungler who was DWG KIA’s Kim “Canyon” Geon-bu.

Outside of Kanavi, the team will need their top laner Bai “369” Jia-Hao and bot lane duo of Wang “Hope” Jie and Lou “Missing” Yun-Feng to continue to stay in form. But as long as the team doesn’t completely implode under pressure or Covid, this should be a cakewalk.

How Rogue can win the series

Week 1 Rogue and Week 2 Rogue are completely different teams. In Week 1 Rogue looked unstoppable as they walked past their entire group. For Rogue to have a chance to win this series against tougher competition than the teams they faced in their group, they are first going to have to play like Week 1 Rogue. That includes playing with confidence and meta reads. They are also going to need their best performers in Week 1 to return to form. Rogue does have a three-headed monster of carries Markos “Comp” Stamkopoulos, Emil “Larssen” Larsson and Andrei “Odoamne” Pascu . According to Oracleselixer.com, all three players had KDA’s above 10. But after Week 2, all of their KDA’s tanked with Larssen having the best KDA of the three with just above a 6.

Eyes in particular should be on Larssen as he will be going up against Yagao who may or may not be feeling the effects of Covid-19. If Yagao is playing off his game and Larssen is playing his best, the mid-lane matchup could give Rogue the advantage they need to pull off the upset. But it won’t be just Larssen who needs to play at his best; with JDG being stacked in every lane, Rogue as a team will need to play their best series of the year to have a decent chance at the upset.