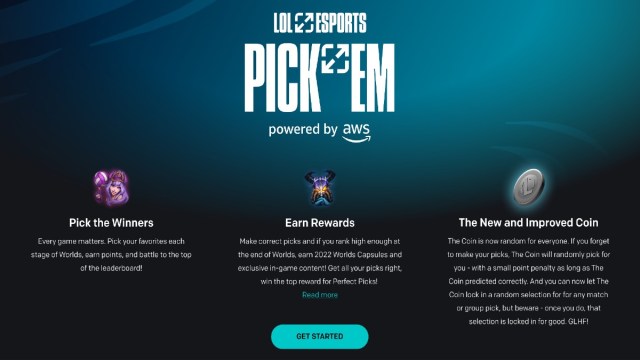 With the 2022 League of Legends World Championship already in day 3, there is a lot at stake for many fans closely following their Pick’Ems. With several upsets already happening in the group stage; different champions and drakes  on the map, there is no way to predict how Pick’Ems and Crystal Ball will end.

The Crystal Ball is the new category that started during Play-Ins with several questions for fans to get seperate points and rewards.

After day 3 of Worlds 2022, here are the results from the Worlds 2022 Pick’Ems Day 1. Stats are compelled from multiple websites like Gol.gg, Liquidpedia, and Oracleselixer.com.

98 different champions have been picked or banned at #Worlds2022 so far! pic.twitter.com/9fzI1Ts0Bc

Aatrox has been one of the favorite picks in top lane since Worlds 2022 started and it is set to continue that way.

Caitlyn has been a force to reckon with in the early game and most teams are taking no chances allowing the bot lane champion slip through the ban phase. While Kalista finished Play-ins as the most banned champion, there has been a significant increase in banning Caitlyn instead.

Leona continues her reign with the most death at Worlds 2022. This is no surprise as engage champions are back in the meta and she is always a comfortable pick for most players.

Maokai still holds the title for most roles played at Worlds. The champion has been played in three roles so far and has now become a flex pick for versatile teams.

With a 25 KDA from Play-Ins and 6.6 from group so far, Fnatic’s Elias “Upset” Lipp leads the way with a 31.6 KDA. However, he is closely followed by Markos “Comp” Stamkopoulos who currently sits at 25 KDA after his second game at Worlds 2022.

No pentakills have been earned since the beginning of the group stage. T1’s Lee “Gumayusi” Min-hyeong almost got one against C9 but was denied by Ibrahim “Fudge” Allami.

The Cloud Drake was the most killed in the Play-in stage but things have changed with Hextech taking over. Since the beginning of the group stage, the Hextech drake has been killed over 19 times.

There has not been any game longer than 39 minutes in the group stage. So, LOUD verus DFM game from Play-ins still hold the record.

Note: The highest win rate for a champion has already been locked in in with Tahm Kench. He was the first champion to reach 5 wins at Worlds 2022.

With three days left in groups, there is still enough time for teams, players and champions to take the lead in Worlds 2022 Pick’ems.