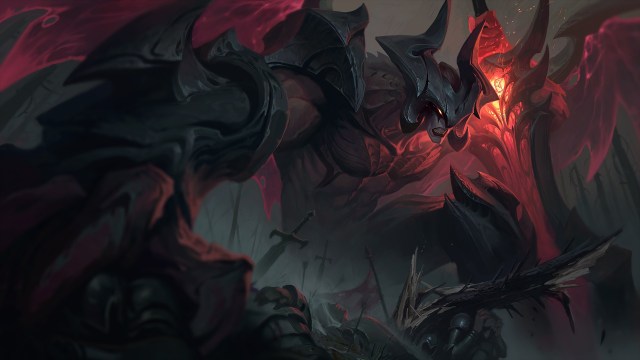 With the 2022 League of Legends World Championship in full swing and many fans around the world glued to their screens to watch their teams play, there is also many of them are also watching closely, their Pick’Ems.

This year. Riot Games expanded their Pick’Ems to include many new categories for fans to flex their knowledge and luck. The Crystal ball section in particular is home to many categories that have the right answer shift constantly. It’s pretty difficult to track every category but dont worry, Upcomer has you covered.

Every day from the group stage onwards, Upcomer will release a report breaking down every category leader while highlighting new changes and trends. Here is the results from the Worlds 2022 Pick’Ems after group stage Day 1. Stats are compelled from multiple websites like Gol.gg, Liquidpedia, and Oracleselixer.com .

Every champion played or banned at #Worlds2022 so far! pic.twitter.com/LqsdvX5CG8

Aatrox is still the leader in the club house with 26 games played with Maokai in second place with 23. The gap actually widened by one game today as Aatrox gained a game on Maokai.

Kalista is still the leader in bans but with multiple Kalista picks today, Caitlyn has closed the gap considerably as she is only two spots behind Kalista at the end of Day 1 in the group stage.

There is no longer any champion with five games played that has a 100% win rate. But there are two champions that are 5-1 in games played. Tahm Kench still is technically in first place but is now tied with Sivir as well.

Leona still leads in total deaths at the end of Day 1 in the group stage with 74 deaths. Aatrox is still in second and has closed the gap a little as he is only five deaths behind at 69.

No has threatened Maokai’s three roles played as Seraphine has still yet to be selected in the support role to tie him.

With many teams only having one game under their belts, its impossible to pick a leader with some players have infinite KDA’s due to them not dying in their first game. However, those will change as more teams and players play more games. With that said, Fnatic’s “Upset”, who was the leader in KDA through the play-in stage actually improved his KDA in his first game of the group stage and now sits an impressive 31.5.

DetonatioN FocusMe’s run at Worlds 2022 is now over but for now Lee “Harp” Ji-yoong still has the lead in most champions played with nine. This will most likely change as more players play more games.

Like DFM, MAD Lions’  run at Worlds 2022 is also over meaning Javier “Elyoya” Prades Batalla’s spot at the top of this list is numbered while Royal Never Give Up’s Chen “GALA” Wei still has plenty of games to extend his lead in this category.

Most kills in a single game: SBG Shogun (16)

Unlike the other two categories, being out of Worlds 2022 contention in this one doesn’t actually mean much. With 16 kills, it will take an impressive performance to surpass Saigon Buffalo Nguyễn “Shogun” Văn Huy’s 16 kill game.

Evil Geniuses added another champion to their ocean of picks and are still the leaders in the most unique champions played category.

No pentakills were earned on Day 1 of the group stage.

There was a Baron Steal on Day 1 of the group stage though extending the number to five.

Cloud Drake is still the most killed Drake so far at Worlds 2022 but Hextech is now tied for the lead.

The longest game at Worlds 2022 did not happen on Day 1 of the group stage and is still the LOUD versus DFM game from the play-in stage.