RNG versus Gen.G was the highlight of the last day of the group stage. 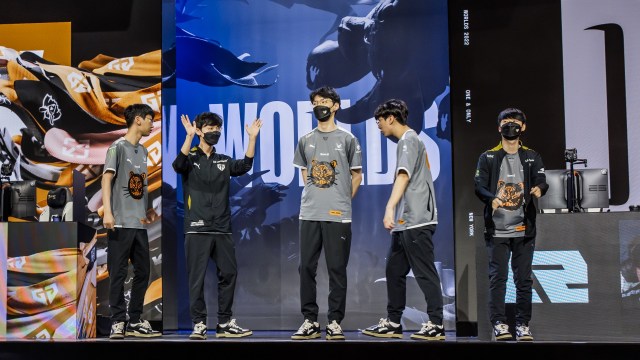 Provided by Riot Games/Getty Images/Lance Skundrich Gen.G picked up the one seed from Group D with a win in the tiebreaker against RNG

It has been a long eight days of League of Legends Worlds 2022 group stage action but after Group D wrapped up play today, the standings are final and the top teams are getting ready for the knockout stage. But before that, Upcomer is bringing fans a look at the best moments from the last day of the group stage. Here is the Worlds 2022 Group Stage Day 8 wrap-up.

Player of the day: Gen.G Peanut

In the four-game slate for Gen.G today, all of their players had standout performances in their undefeated last day of the group stage. But one player in particular had an unreal stat line over the course of the day; Gen.G’s superstar jungler Han “Peanut” Wang-ho only died one time in four games, putting up an absurd 13/1/30 KDA. We named Peanut as Worlds 2022’s best jungler and he certainly proved that today.

Most memorable moment: RNG versus Gen.G

We can’t close out the day and place 2nd in our group! Thanks for all the support and love, our players will do their best to recover both physically and mentally 🖤💛 GGWP Gen.G! pic.twitter.com/tAr9d0icXW

In a potential Worlds 2022 finals preview, RNG and Gen.G put on a show — the final match to end the group stage was a back-and-forth affair from two of the absolute best teams in the world. And with Gen.G striking back against RNG to tie them both atop the Group D standings, the two teams heading back out onto the rift for one more encore performance with seeding on the line. With the score tied one game apiece, it was Gen.G that got the best of RNG and secure the one seed out of Group D. But keep in mind that the entire RNG team were playing through Covid and even though Gen.G won today, a finals rematch would really decide which team is better.

There seemed to be an absurd amount of 1-5 teams at Worlds 2022, and the Cloud9 Twitter account certainly picked up on it. After 100 Thieves and CTBC Flying Oyster ended their group stage with 1-5 records, the Knights of the Round Table were decided. The six 1-5 teams definitely set the record for most teams with that record in Worlds history. The good news is that because of that, there were zero teams that went winless in the group stage, but the bad news is that these teams only won one game.  Now, the terms “Knights” and “Round Table” are still up for interpretation, but these teams can celebrate mediocrity with each other.

Gen.G were favored by many to win Worlds 2022. After a somewhat shaky Week 1, many were nervous about their crystal ball pick. Gen.G beat the overrated allegations in Week 2, and this beautiful team fight against RNG was a big reason why.