G2 went winless, EG got one on the board and X won the group 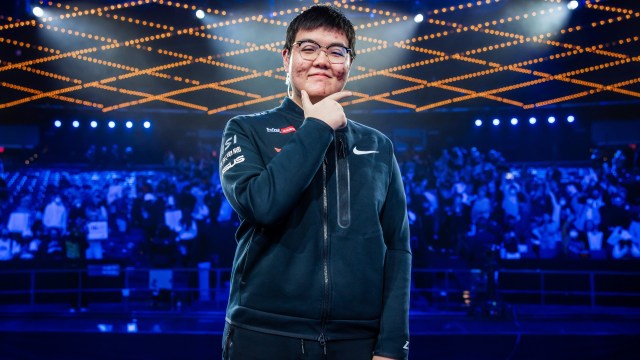 Provided by Riot Games/Getty Images/Lance Skundrich 369 stole the show, and the one seed today at Worlds 2022

Although it was another somber day for the Europe and North American faithful, when it comes to good and exciting League of Legends, there was plenty of it. Here is a recap of all the best moments of the last day of Group B at Worlds 2022.

In perhaps the best performance from a player at Worlds 2022 period — with the highest stakes yet — JD Gaming’s top laner Bai “369” Jia-Hao was tasked as the main carry in the tiebreaker game against DWG KIA.

With the one seed on the line and his team down 5k gold at 20 minutes, 369 decided to have a career-defining game on Aatrox going 10/1/11 and being the primary reason why JDG were the ones that came out with the win in the end. Take a bow 369.

Out of all the crazy champion picks at Worlds 2022, there has not been one as crazy as Fiddlesticks. According to Gol.GG, this was the first time in 2022 that ANY major region team locked in the champion in any professional game. In fact, going back to Season 5, Fiddlesticks has been picked less than 20 times in the Jungle role. Kacper “Inspired” Słoma gave the fans something more to cheer for as not only did Inspired lock in the champion, he did it in a must-win game against JD Gaming.

But even though the pick look good early, it, unfortunately, wasn’t enough as EG took the loss but boy was it fun to watch.

With Evil Geniuses officially eliminated from Worlds 2022 contention after G2’s loss to DWG KIA, the team still had one more game left, in front of the hometown crowd and the most popular player on the EG roster Joseph Joon “jojopyun” Pyun had a golden opportunity to send the NYC crowd home happy.

He tweeted out right before the game that he would be playing Singed in his final Worlds 2022 appearance, a pick that got Jojopyun fame in Champions Queue. With everyone excited for the potential spice, Jojopyun made the crowd go mild as he just locked in Akali instead. And to make matters worse, the meta pick didn’t even matter as EG lost the game anyways.

Although it was JDG that came out on top at the end of the day, DK showed up in the first game big time and with both teams throwing the kitchen sink at each other, it was Kim “Canyon” Geon-bu’s that connected as he cleaned up this fight for DK to force the tiebreak.