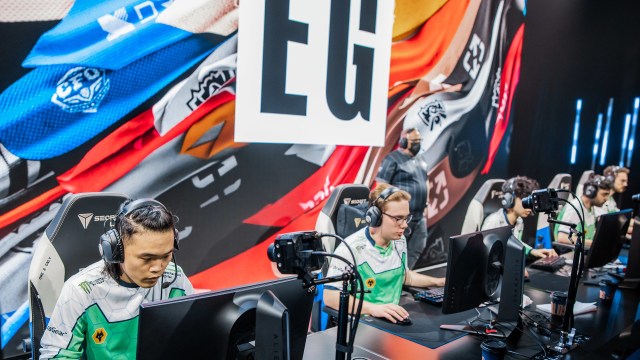 The first half of the Worlds 2022 group stage is over with all teams playing three games each.

While we’ve seen huge upset at the event, things have gone according to predictions so far. All LCS teams are still in the hunt for the first win after going 0-9  while Rogue and RNG remain the only undefeated teams. With a day to rest, every team will look to come back with a stronger second half. Here is the Worlds 2022 Group stage Day 4 wrap up.

Player of the day: Trymbi

Rogue has been the shinning light for all of EU as they’ve begun Worlds 2022 in fine form. Their win against TOP Esports today quelled the mind of doubters who felt that they will falter against tougher opposition. Rogue’s Adrian “Trymbi” Trybus was crucial in ensuring their victory today with his Rakan engages.

Even though Trymbi is well known for his enchanter support plays, he made things difficult for TES on the Rakan. He ensured Rogue stayed alive during the baron take with the flash engage onto two members of TES. Trymbi ended the game with 15 assists, meaning he was involved in all but 3 of Rogue kills.

While G2 fell to JD Gaming today, the crowd certainly erupted when Sergen “Broken Blade” Çelik opted for Darius. The pick brought back memories of his famous performance of his Schalke 04 days and the game against G2.

Day 4 of Groups! 🤪
But NA teams still swapping players around tryna make it out of groups #Worlds2022 pic.twitter.com/1AHr8NzUPt

Day 4 of the Worlds 2022 group stage featured so many good quotes but PSG Talon’s meme stands out. NA is currently having a tough time with a 0-9 record across its three teams. While EG had a close game against DWG KIA it eventually slipped out of their hands when it came to the team fights.

Additionally 100 Thieves had a decent early game against RNG but soon ran out of ideas to stop RNG’s strong mid to late game. With three more games left, NA fans will hope that their teams finish the competition strong.

It’s another day of teams allowing Chen “GALA” Wei to have the Kai’Sa and him showing off on the champion.

While 100 Thieves managed to take a slight advantage in the early game against RNG, the mid to late game was much different with GALA and Li “Xiaohu” Yuan-Hao taking over. After getting one kill in the river, GALA and the rest of RNG turned their attention to 100T and instantly wiped them out.