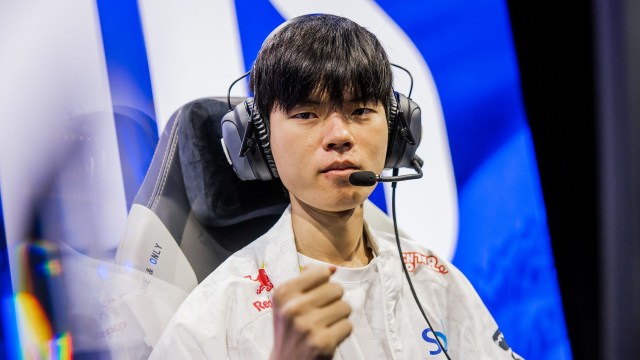 The League of Legends 2022 World Championship kicked off day 3 of the group stage  live from the Hulu Theater in New York. With all teams already having a feel of the competition in the previous days, the competition has gotten much fiercer. Here is the Worlds 2022 Group stage Day 3 wrap up.

Player of the day: Pyosik

Day 3 of Worlds 2022 featured many players who could easily be the player of day but DRX’s Hong “Pyosik”  Chang-hyeon stands out. The player was everywhere he needed to be in the game against Top Esports and helped the bot lane maintain their advantage. He was also crucial in all the most of the team fights and made it hard for Gao “Tian” Tian-Liang to have more impact on the map. Pyosik ended the game deathless with six kills and eight assist to his name.

Day 3 of Worlds 2022 was one to remember for the legendary Lee “Faker” Sang-hyeok who reached his 100th game at Worlds. Faker has been an unforgettable name in League since winning his first Worlds in 2013 and will look to collect his fourth title this year. He also increased his wins to 72, making him the first player to win almost three quarters of Worlds game played,

DRX shocked a lot of fans with their performance against LPL’s second seed Top Esports. While Yu “JackeyLove” Wen-Bo instantly locked in the Draven to counter DRX’s Caitlyn pick, things did not go as planned for him. TES tried to gank the DRX bot lane to ease their own pressure but it quickly backfired as it ended in their bot lane dying.  DRX used the bot lane momentum to take over the rest of the map and secured a huge win against TES.

Best clip: International King GALA back at it

After a quite summer split, the international tournament king Chen “GALA” Wei is showing up at Worlds 2022. The bot laner almost took out the  Flying Oyster roster after an Aphelios galeforce into four members of the team. His engage led to RNG ending the game immediately instead of having to go back to base.