Our experts also pick the best moments from T1 vs. DWG KIA and the MVP from the series 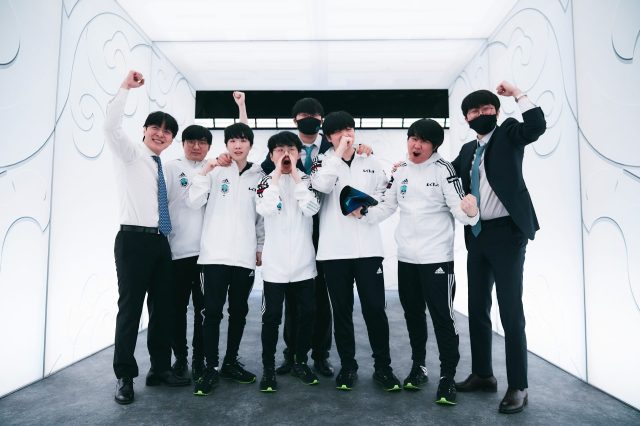 Photo by Lance Skundrich/Provided by Riot Games DWG KIA celebrate for the camera following their 3-2 League of Legends World Championship semifinal win against T1 on Saturday in Reykjavik, Iceland. DWG KIA will face the winner of Edward Gaming vs. Gen.G for a shot at their second-straight Summoner's Cup.

The first League of Legends World Championship semifinal is in the books, and DWG KIA will face either Edward Gaming or Gen.G in the Worlds 2021 final on Nov. 6.

Sunday’s matchup will determine if EDG make their first-ever Worlds finals appearance or if we get our first all-South Korean team final since 2017, when the SK Telecom T1 dynasty crumbled at the hands of Samsung Galaxy, which went on to rebrand as Gen.G. Since then, the South Korean squad has been strong domestically but an afterthought internationally. They might get a chance to reverse the script against China’s top team and then go after a bit of revenge against the No. 1 team from their region next week.

For now, though, it’s all about what went down Saturday, as DWG KIA and T1 battled in what could go down as the best series at Worlds 2021. Upcomer’s experts broke down the matchup, made their picks for Sunday’s best-of-five and summed up the road ahead for DK and T1.

Who’s meeting DWG KIA in the final: EDG or Gen.G?

Warren Younger: Edward Gaming come into the Worlds 2021 semifinals as heavy favorites. They should have the upper hand in every lane, and as long as they play up to their potential, this series is free. However, EDG haven’t had the cleanest Worlds so far, and Gen.G looked really clean against Cloud9. But assuming both teams play at their best, Gen.G’s best won’t be good enough.

The series for Gen.G is all in Gwak “Bdd” Bo-seong’s hands. If he can keep up his form so far at Worlds 2021, and Lee “Scout”  Ye-chan underperforms, then Gen.G have a chance. But there is no way EDG don’t  come out swinging, right? The first-ever semifinals appearance for EDG should turn into their first ever Worlds final.

Nick Ray: I’m torn between this series after watching Gen.G’s masterful performance against Cloud9 in the quarterfinals. On paper, EDG should easily be able to handle Gen.G in a best-of-five, but if Bdd has fully leveled up and raised the bar on his already impressive play after quarters, it won’t be that straightforward.

EDG ultimately have a more holistic approach to the game than their South Korean opponents, although they still rely very heavily on engage-centric comps. I’m expecting them to win out especially because I believe their top side of Li “Flandre” Xuan-Jun,  Zhao “Jiejie” Li-Jie and Scout will be significant difference-makers.

E.G Kant: I’ve been one of Gen.G’s only believer,s but I’m afraid this series is the end of the road. EDG have broken their Worlds quarterfinals curse, and when they’re on point, they look incredibly scary. China’s first seed, in my opinion, are the favorites to make the finals, barring Gen.G literally playing the series of their lives. Their players have all stepped up big time, especially top laner Flandre and Jiejie, whom many questioned coming into Worlds 2021.

Can Gen.G win this series? Absolutely. Do I think they will? Not really. I wouldn’t be surprised if EDG dropped the first game and then went 3-0 after based on how things have been going at Worlds 2021 though.

Tom Matthiesen: Gen.G faced basically no resistance in the quarterfinals against Cloud9. In the Group Stage, however, they showed clear flaws. Edward Gaming’s series against Royal Never Give Up in the quarterfinals also showed that EDG have some weaknesses.  But the thing is: I don’t think Gen.G can consistently punish those slipups. EDG’s calm playstyle invests in gold whereas Gen.G’s playstyle invests in vision, and I think EDG will simply outgun Gen.G.

Younger: Every single player on DK had bad games during the five-game series against T1, but jungler Kim “Canyon” Geon-bu shined the brightest in the three DK wins. Everyone knew coming into the series that it was going to be a tough matchup for T1 in the jungle, and it was. Moon “Oner” Hyeon-joon did get the best of Canyon in Game 2, but overall, Canyon showed up when it mattered the most with a 14/10/27 KDA (kills/deaths/assists) across all five games. In Game 5, it was Canyon’s Talon that came through with the clutch picks and the objective control.

Canyon simply proved to be the better jungle, and the jungle diff was good enough to send DK to their second-straight Worlds final.

Kant: From how I see it, DK’s mid-jungle duo truly showed why they are one of if not the best mid-jungle duo in the world right now. DWG KIA mid laner Heo “ShowMaker” Su and Canyon really stepped up when it was needed of them, even in the losses. ShowMaker’s performance in Game 4 on LeBlanc was a masterclass, and Canyon overall kept Oner at bay, which was no easy task. I was going to ultimately give it to Showmaker, but after Canyon’s performance in Game 5, especially his crucial kill on Oner, I have to give it to him. No matter if we see Kim “Clid” Tae-min or Jiejie in the finals, it will hopefully be a Worlds 2021 matchup to remember.

Ray: All of DK’s players looked great this series, but teamwork prevailed over individual play today. I won’t shy away from answering, though: Kim “Khan” Dong-ha gets MVP this series for me, solely because of what was at stake for him in this matchup.

The veteran top laner will retire after Worlds 2021 to complete his mandatory military service for South Korea. He went into this series knowing that it very well could be the last one he ever plays. Despite the pressure, there was nothing off or different about Khan’s play, particularly in lane, that could’ve inhibited the team’s ability to play the map or execute on their win conditions. Sometimes, just showing up and doing your job is good enough. ShowMaker, who raked up an impressive 20/6/29 KDA this series absolutely gets an honorable mention, though.

Matthiesen:  It is so tough to choose. Deep down, I want to say “screw it” and award T1’s Oner with MVP of the series for his stellar play. At 18 years old, Oner stole the show repeatedly and engaged with the heart of a tenured jungler. But I’ll accept that the MVP is someone whose efforts resulted in their team’s eventual victory. DWG KIA bot laner Jang “Ghost” Yong-jun, support Cho “BeryL” Geon-hee, and Khan showed up, but DWG KIA’s mid-jungle duo is just on a whole different tier. My love for great junglers pushes me to Canyon, so my vote goes to him.

Did the DWG KIA vs. T1 series go as you expected?

Younger: It didn’t go how I thought it would, but it went how I wanted it to. DWG KIA came into the series looking unbeatable, and T1 showed that the reigning world champs can bleed. This series went five games, and T1 gave DK hell. Even though DK showed resilience and held off the inexperienced T1 squad, what this series showed us is that the Worlds 2021 finals shouldn’t be an absolute stomp. In fact, if EDG can beat Gen.G, then the championship match is shaping up to be a banger.

Kant: My prediction was spot-on for DK 3-2, so I suppose yes, it more or less went to my expectations. I believe regional familiarity played a big part in this series, just like EDG/RNG in the quarterfinals. Not only that, T1 in my opinion did not look as far below DK as I thought. It was a great series with a lot of immaculate setups and teamfights, and it really showed that DK has the mental fortitude of champions. Looks like ShowMaker can smugly sit on his throne for one more series, and T1’s Demon King will have to wait in line once again.

Ray: I predicted DWG KIA winning in my predictions, so no, but I later had a change of heart and wanted T1 to win. Honestly, I really just wanted to see Faker win another trophy, man. Is that too much to ask? It’s been four years since his last Worlds finals appearance, and five since his last win; sometimes, it’s hard to let go of how dominant he used to be.

Overall, though, I’m so happy for DWG KIA, and ShowMaker especially. I really hope they win the whole thing.

Matthiesen: Definitely not. I thought DWG KIA would be much more dominant in the series and had predicted a 3-1 victory for them. Instead, T1 came out swinging and put the reigning world champions’ backs against the wall. I can only applaud what T1 achieved in this series with four incredibly young players, and with Faker as their captain. The new generation showed no fear in their most important tournament so far and almost made it to the final. DWG KIA nearly met their match and had to pull out every trick in their book to clutch out the victory.

What’s your pick for most memorable play of DWG KIA vs. T1?

Younger: The Oner Baron steal in Game 2 into the teamfight right after was the most memorable play in the entire series. That fight, which led to a Game 2 victory for T1 showcased that the then undefeated DK squad were mortal.

Undefeated no longer! @T1 take Game 2 against @DWGKIA to even up their #Worlds2021 semifinal series. pic.twitter.com/51idKT5nRU

Even though T1 weren’t able to win the series, they pushed DK to Game 5. That moment wasn’t only the series-defining, it was Worlds 2021-defining. DK didn’t steamroll through Worlds uncontested.

Kant: Call me lazy, but for me it was the whole sequence that led to DK winning Game 5. After T1 got the Baron, DK played the following sequences of picking off Oner, using Ziggs’ ultimate to stop T1’s Baron empowered recalls and very nearly won the game through that play if not for bot laner ee “Gumayusi” Min-hyeong’s Aphelios. It was such a tense moment that I think I might have forgotten to catch my breath. Of course, the ensuing Elder Dragon fight swung decisively towards DK, but that Nexus rush by them earlier was the true turning point of Game 5, in my opinion.

Ray: I don’t think E.G. is lazy at all with his pick, because it’s mine as well. More than small individual moments throughout the series, the big moments at the end when it’s do-or-die stand out most to me. Without mid priority and poor reset timings, T1 were forced into a position where they felt like they needed to continuously force Baron. Once it paid off for them, Ghost’s Ziggs ultimate picked off Oner, and after stopping T1’s recalls, the rest was history.

Matthiesen: There were so many memorable plays in this series. Oner stealing the Baron, Canyon ambushing T1, Keria flashing forward on his Zilean to strike with a double bomb… But for me, it goes to a play that kicked off this series. On Lee Sin, Canyon helped his bot lane out with an early gank. After deleting Gumayusi, Canyon walked away from T1’s turret and threw back a nonchalant Q, hitting Keria. Instead of retreating further, Canyon used Ghost as a makeshift ward to hop on, got back into range to activate his Resonating Strike, and took down Keria.

Keria gonna have nightmares from this play.

Can we call this play “the Canyon”? #Worlds2021 pic.twitter.com/sKq1l3uR0b

It wasn’t a game-deciding play, but it was so elegant, so precise, that it captured everything Canyon’s greatness is celebrated for. Choi “inSec” In-seok got his name attached to the ward-hop kick on Lee Sin. In honor of his greatness, Canyon’s play should be named “the Canyon” henceforth.