T1 will take on DK while EDG will go up against Gen.G 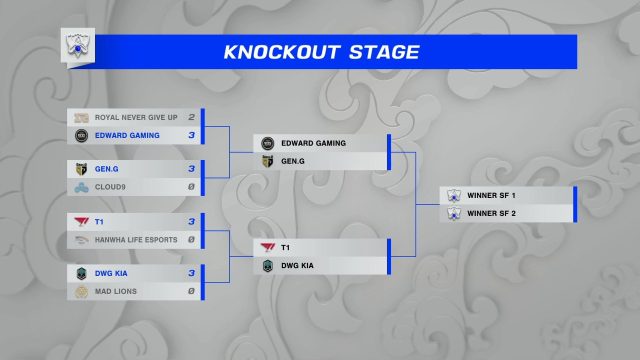 Provided by Riot Games The Worlds 2021 semifinals are now set

Here’s a look at the Worlds 2021 semifinal matchups and how these teams got to the cusp of competing for the Summoner’s Cup.

The battle of the top two League of Legends Champions Korea teams. DK enter the matchup as the reigning Worlds 2020 champions. Not only that, they have not dropped a single game at Worlds 2021. After going 6-0 in the group stage, DK dismantled the League of Legends European Championship winners, MAD Lions, in a 3-0 sweep. But their semifinal opponents will most likely put up a bigger fight.

T1 enters the semifinals on a roll. After earning their spot at the Worlds 2021 tournament through the LCK regional finals, T1 entered as the LCK third seed but clearly have been the second-best team from the region at Worlds. T1 went 5-1 in the group stage, trading games against another top-four team in EDG, and ended up winning the group. They faced off against Hanwha Life Esports in the quarterfinals in a rematch of the last series in the LCK regional finals. In the first matchup, T1 needed five games to take down HLE. They only needed the three the second time around to make it to the Worlds 2021 semifinals.

In the other semifinal match, one team is entering as heavy favorites. EDG are the League of Legends Pro League champions and the only Chinese team left at Worlds, but they are also the best team from the region. After entering Worlds as one of the tournament favorites, EDG struggled a little in the group stage. After trading games against the top-four T1 squad, EDG didn’t get a chance at a tiebreaker after a loss to North America’s 100 Thieves. With the loss, EDG were relegated to the second seed in Group B. Their reward was a match against Royal Never Give Up.

It was a battle between two tournament favorites and LPL rivals. The last time these two teams met was in the LPL spring playoffs where RNG took down EDG in five games. The two teams went the distance again in the Worlds 2021 knockout stage. But this time, it was EDG who came out on top. With the win, EDG advance to their first-ever Worlds semifinal.

EDG’s semifinal opponent is Gen.G, who came into Worlds 2021 as the LCK second seed but have not looked anywhere near as good as their seeding suggests. However, they are in the top four at Worlds 2021 regardless. Gen.G bowed out of the LCK summer playoffs after a 3-1 defeat at the hands of T1. In the Worlds 2021 group stage, Gen.G were caught up in a historic tiebreaker scenario but did enough to advance. In the quarterfinals, they drew another tiebreaker team, Cloud9. Despite heading into the matchup as a somewhat unlikely underdog, Gen.G destroyed C9 in a 3-0 sweep to make it to the semifinals.

They will once again be underdogs in their semifinal match against EDG.