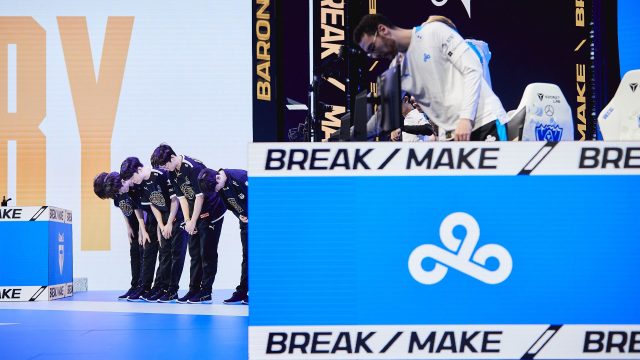 Provided by Riot Games Gen.G dashed the last of the West's hopes with a 3-0 stomp; par for the course in the Worlds 2021 quarterfinals stage.

The Worlds 2021 quarterfinals featured many highly anticipated matchups but almost all of them fell flat due to three of the four series resulting in 3-0’s. Only one series went past three games as the other three were complete stomps. But that didn’t stop the stage from being one that will be remembered for years to come. Here are the highlights from the very fun first round of the Worlds 2021 knockout stage.

Player of the quarterfinals: EDG Flandre

Flandre taking everything from RNG with the help of his trusty Yuumi pal, Meiko keeping him topped off! @EDG_Edward tie up the series 1-1! #LPL #EDGWIN pic.twitter.com/1CK0fiU35Q

The game plan for Royal Never Give Up was simple: give their superstar top laner Li “Xiaohu” Yuan-Hao and ban priority while also camping his lane. Poor Flandre was put on Graves duty in four of EDG’s five games while letting Xiaohu and RNG did whatever they wanted. They gave Xiaohu everything he could ever want with constant lane pressure and counter picks. It did not matter.

Just like the Touhou Project fans namesake, Flandre destroyed everything RNG threw at him. He might not have had the best games of his career from a KDA perspective but Flandre was insanely resilient. When his team needed him to carry games, he did just that. Don’t mind the social media hive-mind that says he “ran it down;” the only thing he ran down was RNG’s nexus on the back of a great Game 5 performance where EDG needed him the most.

In a sea of uneventful 3-0 series, RNG and EDG delivered in an exciting five-game showdown. But the close series wasn’t on everyone’s mind throughout the series or even after. It was the wild champion pick out of nowhere from RNG’s mid-laner Yuan “Cryin” Cheng-Wei. Cryin has been the weak link on the RNG roster all year and EDG aimed to capitalize on it. With the draft focused on taking away Cryin’s champion pool, he busted out a champion that hasn’t been seen in years. He locked in Annie in Game 2.

Up to that point, Cryin had no professional games on the champion and looked shaky in his first game on it. He will live in infamy for this hysterically bad Annie W, as RNG got clapped in Game 2 with the Annie pick being a big reason why.

But RNG didn’t give up. They picked it again in Game 4. With RNG facing match point, they put their faith in Annie once again. This time, the pick paid dividends as Cryin went 4/1/12 on the champion to bring the series to Silver Scrapes.

The tale got even wilder as, in Game 5, EDG spent a ban on Annie. An Annie ban at Worlds 2021 during a Game 5. No one could have seen this happening. The ban paid off as Cryin looked lost on Orianna and EDG won the series. But Cryin won the hearts of many as he drew a ban on a champion he had played only twice in his pro career during an elimination match at the world championship.

The EDG vs. RNG series was intense and, after EDG’s jungler Zhao “Jiejie” Li-Jie was benched in the LPL summer playoffs for not being able to secure objectives, something clicked for the young star. Ever since his return, Jiejie has been money in clutch smite fights. He showcased that talent well in Game 3 against RNG, where he outplayed the LPL second-team all-pro jungler Yan “Wei”  Yang-Wei in back-to-back baron fights to steal Baron away twice. EDG went on to win the game and then the series.

BACK TO BACK BARON STEALS BY JIEJIE! #Worlds2021 pic.twitter.com/LPJfdEuzwL

It was looking great for Cloud9 entering the quarterfinals but, as everyone was inhaling unhealthy amounts of hopium, they came down crashing. After their 3-0 loss at the hands of Gen.G, C9 is now going home. Better luck next year.

Worlds 2021 has entered the semifinals stage. The top four teams in the world have been decided. Three of them are from the LCK. The reigning Worlds 2020 champs DWG KIA, Lee “Faker” Sang-hyeok and his legendary team, T1, and the LCK second seed Gen.G complete the LCK trifecta. The lone team from another region is the LPL champions, EDG. They were the only team to not have a 3-0 sweep in the quarterfinals.

EDG will take on Gen.G in the first semifinal match on Saturday. The other semifinal match will pit T1 vs. DWG KIA in a rematch of the LCK summer finals on Sunday. The winners will advance to the Worlds 2021 finals.