Worlds 2021 pick'em roundtable: Who will win the knockouts?

Worlds 2021 pick’em roundtable: Who will win the knockouts? 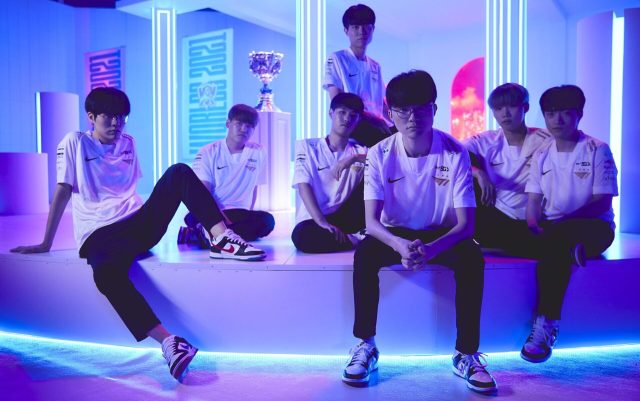 Photo by Lance Skundrich for Riot Games The Upcomer panel is unanimous in predicting a T1 win in the first match of the Worlds 2021 knockout stage.

With the Worlds 2021 group stage wrapped up, it can only mean one thing: it’s time for knockout stage pick’ems. After nearly five million submissions, only 48 perfect brackets remain. And with the quarterfinals on the horizon, the Upcomer staff have gotten together to discuss their own picks for the four matches coming up.

The eight remaining teams were drawn into four separate quarterfinals matchups: T1 vs. Hanwha Life Esports, Royal Never Give Up vs. Edward Gaming, DWG KIA vs. MAD Lions and Gen.G vs. Cloud9.

Ahead of these big knockout stage clashes, we surveyed six of our resident League of Legends writers on their pick’ems brackets. Here is who everyone picked alongside the reason they made those choices.

For the other matches, I’m going chalk by picking the favorites. Edward Gaming will upend Royal Never Give Up, DWG KIA will tame the MAD Lions and T1 will survive a test against an improved Hanwha Life Esports. Out of those three, I’m shakiest on T1 and HLE, as betting against Jeong “Chovy” Ji-hoon could end in disaster.

The group stage’s best of one format is terrible at determining team strength. Best of fives show us a lot more. That’s why it’s important to use analysis from each team’s performance throughout the year, not just the small sample size of games in the group stage. The teams that have the clutch factor in best of fives will win each matchup.

Starting off with T1 vs. Hanwha Life Esports, these two teams actually just played against each other in the League of Legends Champions Korea Regional Finals. T1 got the best of HLE there, but it was a close 3-2 series. When two teams of similar strength meet, you have to go with the hot hand, and T1 is currently the hotter team.

Edward Gaming vs. Royal Never Give Up might be the hardest to predict because these two teams have not played against each other in a best of five since the League of Legends Pro League spring playoffs. RNG took that series 3-2, but EDG have looked way better since their encounter. EDG should have the edge based on recent performance.

Cloud9 vs. Gen.G is everyone’s favorite go-to upset for the quarterfinals, as it should be. Gen.G have not proved themselves in best of fives all year. C9 on the other hand have done so. Go with the C9 clutch factor.

Now for the spice. I’m picking MAD Lions over DWG KIA, and there are two reasons for this. The first is because nailing this upset right will put anyone who picks it so far ahead of everyone else they are playing pick’ems against. What’s more, it’s not even a bad pick.

People forget that these two teams actually played at the Mid-Season Invitational and that series went to five games. Both teams are insanely clutch in best of fives. So, go for the MAD Lions upset here, if only to just believe in something magical.

While I think the match between Hanwha Life and T1 will be a close one, I still think it leans in favor of T1. We haven’t seen T1 truly perform the way they have been recently in a few years. Now that T1 made it out of their group with the first seed, I believe they have the momentum to win their first match against Hanwha Life.

The third matchup is an easy pick in favor of DWG KIA. While MAD Lions were able to make it out of groups, it wasn’t pretty. Meanwhile, the former world champions went a perfect 6-0 in their group and look like an unstoppable force. If MAD Lions pull this away from DK, it may be the biggest upset in Worlds history.

As for the last one, what can I say? Cloud9 looked great in their second week of groups after starting out winless. They are the only surviving team from North America to make it out of groups and have shown resilience. Gen.G Esports didn’t look as strong toward the end of their group, alongside MAD Lions, and could easily be thrown off guard by Cloud9.

There are good reasons why no one consults me on picking winning teams or making correct predictions. But then again, pick’ems are for fun, right? Right???

For the first match, I’m picking T1 over Hanwha Life Esports. To be honest, it’s hard to call it a walkover, as some might think. Regional familiarity plays a big part in these matches, in my opinion. And in the regional finals, HLE took T1 to five games. However, I think T1 should have shored up a lot of their issues since then and won’t take HLE lightly. T1 should take this.

Royal Never Give Up vs. Edward Gaming is the same, as there is an awful lot of familiarity between the two teams. I think this is the absolute hardest matchup to call. Both teams have fought many historical slugfests against one another in the LPL, but their most recent playoffs game was last spring, where RNG won 3-2. This time, I’m going to believe in EDG based on their recent performances. Believing in EDG tends to be a “curse,” but it takes a curse to break one, so… EDG’s Worlds curse, begone! The LPL’s last hope rests on this series.

The match between the mountain and the minnow in DWG KIA vs. MAD Lions is a painful one for me to predict. DK dwarfs all the other teams with how impeccably they are playing right now, so much so that even the LEC champions are seen as mere fodder against them in the eyes of many. I can see MAD doing damage like they did in the 2021 Mid-Season Invitational, due to their incredible ability to come back from huge deficits and adapt well in best-of-fives, but DWG KIA should take this series. I’m rooting for a monumental upset, but I’ll pick DWG here because I need points.

Finally, I’m picking Gen.G over Cloud9. My North American coworkers are high on hopium, but not me because, well, I’m not American. Did I pick Gen.G out of spite then? Well… Make no mistake, I believe Cloud9 are more than capable of upsetting Gen.G, but the converse is also true. No one seems to believe that Gen.G can make a deep run at Worlds, but out of all the opponents they could have asked for, Cloud9 are probably their best shot. I believe Gen.G will take this series, but Cloud9 will make it very close.

In the first matchup, I’m taking T1 over Hanwha Life Esports. It’s quite possible that this is HLE’s time, and the Church of Chovy may finally be witnessing the prince that was promised in all of the glory of the Worlds 2021 stage — but I’m not in the business of betting against Lee “Faker” Sang-hyeok when it counts. T1 are back.

I always approach any tournament bracket I fill out with one thing in mind: there are always upsets. It just comes down to where you’ll find those upsets. With that said, I’m predicting we’ll see our first one of the knockout stage in Royal Never Give Up against Edward Gaming. The reigning champions of MSI 2021 historically have a knack for showing up when it matters most. So while Edward Gaming are favored to win this match, I’m betting on that RNG clutch factor here. Regardless of what actually happens, I think this will be one of the most explosive and hotly contested matches of the knockout stage.

When it comes to the third match, I’m sorry Europe, I’m sticking with the status quo. The MAD Lions have had a fun little run at Worlds 2021 so far, but it’s time for DWG KIA to show why they are consensus favorites at this tournament and why they won last year. I have DK winning in a stomp.

Last but definitely not least: I’m going to hop on my boy Tyler’s hype train here with a big fat #C9WIN over Gen.G. This is either the year of NA or it’s every other year, ever. Either way, I’m on a hopium overload and the only cure is a C9 appearance in semifinals. I’m riding this train all the way, whether it ends up on a miracle run to the top of the mountain or in a glorious, fiery crash on the side of it.

You honestly shouldn’t listen to me, and if we have even one pick that’s the same, you may want to get worried. I absolutely bombed out of the group stage pick’ems, which is a true bummer considering I’m historically really good at analysis and prediction (for esports media, at least). But here I sit, wallowing in despair after the group stage left me broken and defeated, much like FunPlus Phoenix (my Crystal Ball pick, of course).

Anyway, for the first match, I’ve got T1 over Hanwha Life, which I think is fairly uncontroversial. After HLE ran their first two gauntlet series, T1 took them down, and T1 have continued to get better and better while HLE barely squeaked through groups. It shouldn’t be too close unless Faker has an aneurism. If HLE somehow take this, it would be more shocking than Suning over JD Gaming in 2020.

I’ve got RNG over EDG purely based on the EDG curse and RNG’s less-than-hyped performances so far. It seems like people just don’t rate them very highly at all despite them going on a wild win streak this summer and winning MSI earlier this year. EDG should be better, but RNG will still steal the win.

I have DK over MAD, of course, and I’m not even going to bother legitimately explaining this one. One of them was the best team in groups and the other had to go through a four-way tie to get here. If MAD couldn’t take out Gen.G in that last match, there’s no way they find more than one win against DK.

Speaking of Gen.G, they’re toast! They got matched up against NA’s “finest,” Cloud9. Luka “Perkz” Perković has an affinity for taking out Korean teams, and the last time C9 made it out of groups they easily 3-0ed the Korean second-seed, Afreeca Freecs, in the semis. This time it will be no different. (Not at all biased or hopium abuse).

All of the above graphics were captured via the official LoL Esports website. To make your own Worlds 2021 knockout stage pick’em bracket, cast your picks now.