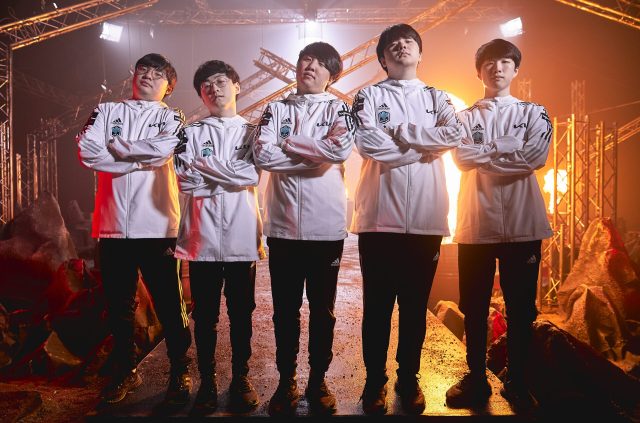 Provided by Riot Games/Getty Images DWG KIA have put on a masterclass at Worlds so far, winning all nine of their games

Just as expected, DWG KIA have moved forward to the 2021 League of Legends World Championship semifinals against T1 next weekend after knocking MAD Lions out of Worlds 2021 in a 3-0 sweep. Despite the game score, the series was decently competitive, with MAD nearly stealing a win in Game 2 and somewhat holding their own otherwise, but DK was definitely the more talented team on the day.

With the lossless series, the defending champions have continued their perfect run at Worlds with a 9-0 record through the quarterfinals. So far, Worlds 2021 has been their playground, and others are just borrowing some time until DK end their recess and send them back to class to study up better for next year.

With that series conclusion, there is one more quarterfinal left to determine the last team for the semis. Cloud9, who was a DK victim in groups, will face off against Gen.G on Sunday. The winner will face EDG next weekend for a shot at meeting an LCK rep in the finals.

Upcomer’s staff came together to discuss if reality matched our expectations for MAD and DK, make some bold predictions about DK’s Worlds run and preview the Cloud9 – Gen.G quarterfinals.

Were there any surprises from MAD vs. DK?

Parkes “parqueso” Ousley: The only surprise for me was how strong MAD Lions were in the early game Game 2, and then that they still somehow managed to lose the game. They are so good at out-teamfighting their opponents and playing objectives well with flanks and pristine engages from Norman “Kaiser” Kaiser, but they botched their fights with a gold lead. They made Game 3 close, despite being in the exact opposite position, but the whole Game 2 looked a bit backward from what I’d expect. Otherwise, it was a 3-0, which was my final prediction, but seeing DK claw their way back into the game is a bit unsettling knowing other teams are still left in their path to the Summoner’s Cup.

E.G “Megalodontus” Kant: None whatsoever. I optimistically thought it could be 3-1, and MAD Lions did almost make it possible in Game 2, but otherwise I thought it would realistically thought it would be a second Worlds 2021 quarterfinal sweep. That’s not because of how bad MAD are, but how impervious DWG KIA have looked. My nonsensical take on the “why my team will win” roundtable aside, I honestly thought that anyone who drew DWG in the first round of knockouts would be a death sentence, and MAD were the unlucky one.

Warren Younger: No unfortunately. I was high on hopium but I knew that this was going to be the result. DK were the heavy favorites coming in and the hope wasn’t high enough for MAD Lions to put up a real fight. Game 2 was kinda cool though.

Rashidat Jimoh: Not really, but I was hoping MAD would somehow take at least one game off DK and get that momentum going. Unfortunately DK just showed that they are class ahead of everyone in the tournament and gave little room for MAD to really find their footing in the series

Ousley: I don’t think it’s going to happen, but I think there’s a very decent chance that they could pull it off. They have T1 up next, and DK have a lot of information on them and could, therefore, have an easy, clear-cut match. However, that means T1 also have information and experience against DK, and their chances of taking a game or two are pretty high. The thing is, I think unless EDG make great improvements in their play, the final will likely be very one-sided, so T1 is the best chance of any team remaining to spoil DWG KIA’s record.

Kant: I’ve spoken about regional familiarity playing a big part of these matches and I believe it for this matchup more than ever. I don’t think DWG will go unbeaten, simply because T1 are on fire right now. They seem to be thriving in this meta, like DWG, and this semifinals could be an incredible series. I still favor DWG, who won their last meeting in the LCK finals 3-1, but I don’t think they will win 3-0. And if it’s Edward Gaming making the finals, I don’t expect it to be a 3-0 win for any team either.

Can they be stopped? #Worlds2021 pic.twitter.com/3wYvuj2fT7

Younger: There definitely is a real chance they do just go undefeated but with a matchup against T1 next, I would not bet on it. T1 looks very good right now and are a better team than DK played against in the LCK summer finals. Not only that, they will most likely, knock on wood, play against Edward Gaming in the finals which should be an exciting matchup. DK are still the favorites to win worlds, but undefeated? Nah.

Jimoh: It is definitely a possibility that can happen especially if they get past through T1 without dropping a game. However as the competition reaches the final stages it may be hard to maintain that perfect record. Regardless , if any team can pull off the undefeated record under the circumstances it will be DWG KIA.

Ousley: All I expect is good, intense competition with a DWG KIA victory at the end of the day. I am somewhat worried that it could be a really low kill, slow series with long game times, but I’m hopeful that T1 tries to be a bit inventive and make things a bit less … LCKey. Ideally, we’ll have four or five close-fought games, but I’m definitely worried it will just be a boring 3-0 in the end.

Kant: I want it to be five games, but I’m not sure, honestly. It could be four games too. What I am expecting though, is immaculate, extended teamfighting from both sides. I don’t expect fights often, but when it happens, I’m expecting it to be ‘top 10 anime battles’ worthy. I also expect pure narrative driven matches, especially since Heo “ShowMaker” Su will be taking on Lee “Faker” Sang-hyeok in a Worlds semifinals match. ShowMaker currently occupies the throne as defending champion, was it merely a symbolic gesture to warm it for the Unkillable Demon King? We shall find out.

Younger: Even though the Royal Never Give Up vs. EDG series did go to five games, the series itself was rather boring with each game being super one-sided. However, I expected that series to go the distance and I probably expect this series to do the same. DK and T1 are the top class of the LCK and I think both teams are in similar form. I expect T1 to put up a real fight even if they don’t win.

Jimoh: While I do not think we will actually see up to five games, I expect complete god-like macro play from both teams. Compared to other regions, LCK teams like to often play a more controlled game and minimize fights where possible. Even though we may not see much bloodshed like the EDG vs. RNG series, I still expect both sides to match each other evenly.

Ousley: I’ve got to go with Cloud9 here, and I’m probably more confident than I should be. I haven’t been super impressed with Gen.G, though I must admit I didn’t watch as much LCK as LCS and LPL. But I felt like Gen.G were not very strong in the group stage and got a bit lucky to escape, especially as the first seed. And I think C9’s improvement from the first round-robin to the second was huge. Plus, they easily wiped the 2018 South Korean No. 2 seed, so I’m just expecting this to go similarly.

Kant: In the Pick’Ems roundtable, I think I was the only person to pick Gen.G over Cloud9. Either this will make me Upcomer’s clown or a lucky ducky. I prefer the latter, so I’m sticking to my guns: I’m banking on Gen.G to take the series. Many people I’ve spoken to have little to no belief in Gen.G to make a deep run, but I think otherwise. Maybe they’ll only end up top-four, but it’ll be a huge victory for Gen.G nonetheless. I believe Cloud9 will push Gen.G to the brink though and they should thrive in a longer best-of series. This match will test which region’s fans have the most faith!

Younger: All year I have been super low on Gen.G. They are boring to watch, they don’t have the super star playmakers that can turn around best of fives and they barely scraped out of an easy group to get to this point. On the other hand, Cloud9 are very exciting to watch, have Luka “Perkz” Perković in the mid lane and got out of the so-called group of death at Worlds 2021. Gen.G have won only one best-of-five all year while C9 have won several. It’s weird to say, but I don’t think this is an upset. I actually think C9 are a little favored in this matchup.

I don’t think this series goes five games. If Gen.G are better than expected, they should beat C9 handily. But if they are not, then C9 should roll them. It’s all on who shows up Monday, and C9 have been showing up recently.

Jimoh: I’m actually quite conflicted on this one because I think both teams are evenly matched. However, based on how the group stage played out and the momentum, I’ll go for Cloud9. I have not really been impressed with Gen.G so far at Worlds because I believe they can do far better than what they have shown. Whereas C9 have improved, especially in Week 2 and are actually the only team that made things a little hard for DWG KIA.