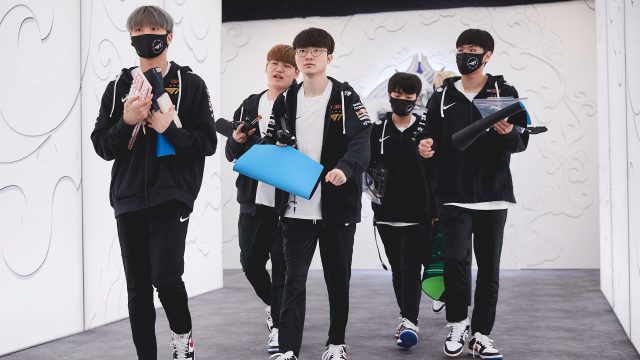 Photo by Lance Skundrich for Riot Games T1 walk on stage to compete at the League of Legends World Championship group stage on October 16, 2021 in Reykjavik, Iceland.

Could the Worlds 2021 knockout round start any better than Lee “Faker” Sang-hyeok vs. Jeong “Chovy” Ji-hoon?

In the opening quarterfinal of the playoffs, two South Korean rivals will take each other on, as the winningest player in League of Legends history looks to add a fourth Summoner’s Cup to his collection. For Chovy, this is the biggest match of his career, and he needs to overcome an icon to make his first-ever world championship semifinal.

Before the elimination best-of-five begins on Friday, Upcomer’s staff has you covered with a preview on the heavyweight fight between two of the best mid laners in the world.

Whose legacy needs this win more between Faker and Chovy?

Tyler “Fionn” Erzberger: While a deep run at Worlds 2021 would quiet any talk of Faker losing his fastball, I have to believe that for pure legacy, it has to be Chovy, right? Faker has three world titles and, regardless of who wins this year’s Summoner’s Cup, including DWG KIA, he’s going to continue being the undisputed greatest player to ever download League of Legends.

For Chovy, this is his third straight world championship quarterfinal in his third different organization, and he’s never gotten past the first round of playoffs. Chovy’s status as a player goes up a level if he can take out Faker at the world championship, so I have to go with him.

Declan McLaughlin: The Church of Chovy has been praying for him to go past this stage, and if the lane monster doesn’t, it may ding his legacy more than it ever could for Faker. It’s easy to coast with three championships, but it’s hard to do the same when you’ve barely made the knockout stage internationally.

I see this match as Charles Barkley (Chovy) vs. Michael Jordan (Faker) in the 1993 NBA Finals. One player is remembered as the best to ever play, the other hosts a show on TNT, and Chuck could’ve boosted his stature more if he won that series and added a ring to his accolades.

Warren Younger: Although there have been other players that have slowly made their way into the GOAT conversation, no one has or probably ever will match Faker’s legacy. At this point, he has done everything he can possibly do in the League of Legends world. The only thing really left for him to do is leave T1 and win Worlds on a different team. With that said, Chovy could possibly take a step into the conversation starting with a win here.

We all know how good of a player Chovy is, but it’s hard to realistically put him in that conversation since he hasn’t won the big one yet. In fact, he really hasn’t even come close. His road this year has been hard, but overcoming adversity is huge for a legacy. Chovy needs this win, or else he might just become a Dan Marino or Phillip Rivers type player.

E.G. “Megalodontus” Kant: In my humble opinion, even if Faker and his team didn’t make the quarterfinals at Worlds 2021, his legacy remains intact. No one can ever take away whatever he’s accomplished in League of Legends, and he will remain the face of LoL esports for years to come regardless of how T1 finish. What he wishes to accomplish now is entirely up to how long he stays motivated, since he’s won almost everything there is to win.

Chovy’s story is a bit different. He has been a monstrous presence in any team he has been on, and long has he been touted a successor to the throne. However, that throne is currently occupied by Heo “ShowMaker” Su, who currently makes an excellent case to be the best player at Worlds 2021. A win for Faker here would be big but it’s adding onto an existing, golden legacy; a win for Chovy here however, would be monumental in helping him reach that level people have been wanting to see from him for so long.

Aside from Faker and Chovy, who is the most important player in this series?

Fionn: My eyes are on Kim “Willer” Jeong-hyeon. The rookie player was incredible in the play-in and group stages, and though he’s made a few mistakes, his overall stock has never been higher. While Chovy is a self-dependent player and doesn’t need much help, I want to see Willer be a factor in the early-game, getting his bottom lane ahead or protecting Park “Morgan” Gi-tae on his isle in the top lane. If Willer can have a strong series, there’s no reason why Hanwha Life Esports can’t pull off the upset with how in form Chovy and Kim “Deft” Hyuk-kyu look so far.

McLaughlin: I think the other side of the jungler matchup is where fans, and I, will be watching. Moon “Oner” Hyeon-joon, also in his rookie year, was the catalyst for T1’s bounce back to form during the regular season. If he can’t get anything going, or if he has a few “rookie moments” of his own, he may decide the series by himself.

Younger: Outside the matchup in the mid lane, all eyes should be on the potential future stars of the League of Legends Champions Korea. In the bot lane for T1 lies the young star, Lee “Gumayusi” Min-hyeong. 2021 was Gumayusi’s first full year on the T1 main roster, and in his short time there, he has turned heads.

Taking the reins from the veteran Park “Teddy” Jin-seong, Gumayusi has a lot of expectations on him to perform now. T1 has one of the best bot lanes in the world, and in the biggest match of Gumayusi’s career, a good performance here would do wonders for the young bot laner’s career.

Megalodontus: It’s the bot lane for me. I know the Worlds 2021 meta has seen a heavy focus on mid-jungle and especially jungle, but HLE and T1’s bot lanes have been showing up big for both their teams.

It would be easy to highlight the excellent bot laners of Gumayusi and Deft, but I’d like to give a shout out to the supports, Ryu “Keria” Min-seok  and Oh “Vsta” Hyo-seong. Keria has just been all-round excellent while Vsta has had some standout moments as well, and I believe they will be crucial to how both teams do in this series.

What player/champion combination are you looking for in the quarterfinal?

Fionn: While Chovy’s performance on LeBlanc against Fnatic might have been one of the best individual performances at the world championship in the past few years, I’m going with Faker and Ryze.

Whenever Faker has been put in a position where he has to make a statement and show people that he’s still the best there is, Ryze is usually the card he pulls out to silence the doubters. In a tournament where Ryze has been a priority selection in the mid lane, I want to see Faker pilot the champion and use his superior understanding of the map to thwart Chovy’s advantages inside the laning phase.

McLaughlin: Chovy has said he feels he is best on tanks, so any beefy laner he pulls out will be exciting for me. If he manages to beat Faker in lane and lead in Creep Score on something like Sett or Orrn, then his legacy will be set as one of the best. But, with the current Worlds 2021 meta, the combo I am most looking forward to is Chovy on Galio, to see just how hard he will try to carry his team with the champion’s cross-map play potential.

Younger: Well, in the Worlds 2021 music video, Chovy was featured using Orianna. The champion hasn’t been the most prominent mid laner in the Worlds 2021 meta, but it just feels fitting for Chovy to bring it out. Not only that, it would make the Burn it All Down music video that much sicker if Chovy piloted Orianna in order to get his rematch against DWG KIA’s Heo “ShowMaker” Su. I just hope that Chovy can make Orianna look cool in the game like he did in that video.

Megalodontus: Oner and Poppy. Yes, I know, that’s a cheap recency bias answer. Oh wait, you mean Chovy and Faker? Twisted Fate. For both players. Well, Sylas, too, to an extent, since many teams are intent on countering TF with Sylas, despite mixed results.

Twisted Fate has been the most prioritised pick for mid lane thus far at Worlds 2021, and both players have had very strong games on this champion. Other than that, there’s always LeBlanc, which Faker has been traditionally famous for, while Chovy used it to tear apart Fnatic in groups with a stacked Mejai’s.

Who is winning T1 vs. HLE and what’s the final scoreline?

Fionn: They went to five in the South Korea Regional Finals when T1 narrowly outlasted HLE, and I think we’re going to get a repeat of what we saw a month ago, but with even better gameplay. When HLE has the best player on the field, it’s impossible to count them out, but I think the top lane gap between Kim “Canna” Chang-dong and Morgan will be a point that T1 knows to exploit throughout the series.

Chovy might end with the better numbers and have the bigger moments in the series, yet I think it’ll be Faker winning the war in an instant-classic, five-game series.

McLaughlin: I think this will be a staple game for HLE. Chovy and Deft have ascended into their peak form in time for the international event and Morgan is no longer a liability, but that was also true for their Regional Finals matchup. But the storyline of Chovy making it past his supposed Worlds quarterfinal ceiling with the worst team he has attended the tournament with is too hard to pass up. The narrative writes itself.

Younger: Chovy is good, Faker is too. But not only does T1 have the stronger team, the last current head-to-head matchup and the better group stage results, they have the GOAT on their team. Don’t bet against Faker in a close matchup.

Megalodontus: I think that while HLE are more ‘warmed-up’ due to their extra games in play-ins (which they needed), I also think T1 will be more prepared to face them since the Regional Finals. Regional familiarity will play a big part in this series and, overall, I favor T1 to take it home — but HLE will put up a fight.