Shaco, backdooring and an NA victory? 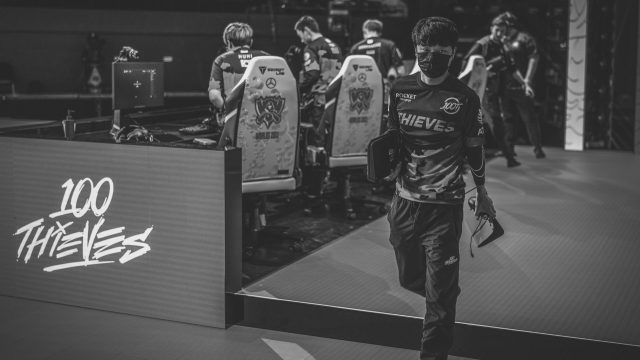 Provided by Riot Games 100 Thieves are eliminated from Worlds after loss to T1.

Day 4 of the League of Legends World Championship was a great success for North America, but Day 5 was the opposite with 100 Thieves failing to impress during their final day. The opposite was true for South Korea as yet another team from the region topped the charts of their group.

DetonatioN FocusMe fail to back door

After both 100 Thieves and DFM were eliminated from Worlds 2021 the two teams had to face off one last time. Despite the match between the two teams meaning absolutely nothing, the game dragged on in one of the longest matches of the event. Forty nine minutes of questionable play came to a head after DFM forced a backdoor to end their match against 100 Thieves.

While close, 100 Thieves were able to get to their base in time and stop DFM from backdooring to win. When all five members of DFM fell, 100 Thieves pushed their way down the map to end the game themselves. DFM had the right idea, but the wrong execution against the region that has become known for holding on until the last second.

An honorable mention to the day came in the form of DFM locking in Shaco for their final match of the day. Even if they went 0-6 at Worlds, DFM showed that they would be going out on their own terms. It also proved that any champion can be played on the Rift, regardless of the state of the tournament.

100 Thieves, like Cloud9, had their backs against the wall in their final day of groups at Worlds 2021. With a 1-2 score line, the League of Legends Championship Series champions would have to win all their matches to force a tiebreaker in the group. However, North America’s dreams of getting all three teams through the group stage were crushed when T1 took down 100 Thieves in a convincing Game 1.

Proud of the fight.

Regardless of their status at Worlds 2021, 100 Thieves had to play out their remaining two matches. Their first one against DFM nearly ended in disaster after DFM attempted to back door to end the game. However, it was the second match against Edward Gaming that potentially hurt the worst. Once again, the match meant nothing for 100 Thieves who were already eliminated from the tournament. Regardless, 100 Thieves proceeded to play near-flawless League of Legends… for no reason whatsoever. The victory left was fans questioning why 100 Thieves couldn’t have played that well against T1 earlier in the day.

Edward Gaming was one match away from securing the first seed in Group B. 100 Thieves were coming off a rough victory against DFM and overall looked to be having an off day. EDG, on the other hand, was also coming off a difficult loss to T1 that put them in the tough spot of having to beat 100T to come out on top. But, it’s just NA, right? Wrong, very, very wrong. As showcased by Cloud9 during yesterday’s matches in Group A, NA will come out swinging when it is least expected.

EDG looked lost throughout their match against 100T, which ended in a quick 35 minutes after 100T accumulated a 10,000 gold lead against the LPL powerhouse team. To make matters worse, EDG only earned four kills across the entire game against 100T’s 21.