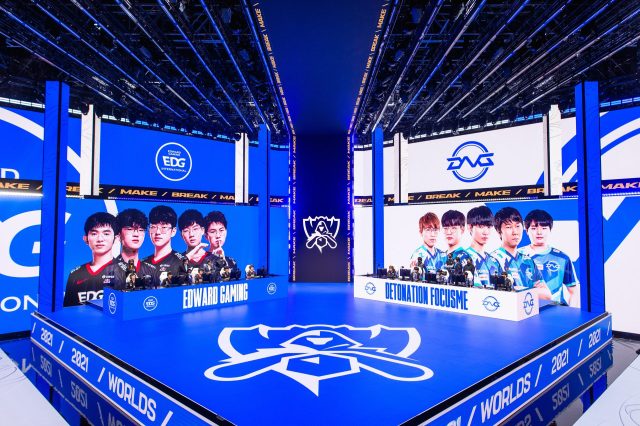 Welcome to our Worlds 2021 match ratings, as we enter Day 5 of the group stage. Every day, I, your designated guinea pig and critic, will watch all of the world championship games so you don’t have to. I will be here to dish out star ratings for every game and let you know if I recommend the slew of fights that day at Worlds.

After an incredible finale to Group A, Saturday is all about Group B.

Without further ado, here are my match ratings for Day 5 of the group stage at Worlds 2021.

A masterclass in a contender cutting up a team just happy to be in the main event without giving them any sort of chance to cause an upset.

DFM wanted a bar brawl and instead, in contrast to the LPL’s reputation, EDG forced the Japanese side to fight in their domain. When the surprise variable was stripped from the outgunned underdog, it was over before we even hit the mid-game.

Yeah, you read it right. This game isn’t even getting a one-star review. It gets a half a star for wasting 30 minutes of my life I’ll never get back.

100 Thieves drafted an Exodia-level teamfight composition with some of the best five-on-five ultimates in the game and then proceeded not to use any of them. T1 chipped away with their poke, abused 100T’s extremely passive play and then just used a Baron to end the game.

A nice eye cleanser after the last game. Whereas in the first time these two teams met at the event where it was EDG that dissected T1, it was the South Korean squad’s turn to return the favor in the rematch.

Following an early lead and a Rift Herald play that wasn’t traded effectively, T1 choked out vision and jabbed at EDG before finally delivering a final blow in a clean victory.

Watch this game if you’re drunk. Otherwise, this game meant nothing except for pride and was 50 minutes of mind scratching plays. It was as frustrating as it was semi-entertaining.

Shaco was picked. That was cool, I guess.

Yeah, this day is what we get due to how amazing yesterday was with all the twists and turns. In contrast, Group B is a slow, long drive where you keep asking “are we there yet?” every five minutes.

100 Thieves decide to play their best game of Worlds 2021 when they’re already eliminated from playoff contention. Although EDG could have played better, the lingering question will be what would have happened if 100 Thieves had been this proactive in their earlier game with T1