Here's hoping to an upward trend of high quality matchups 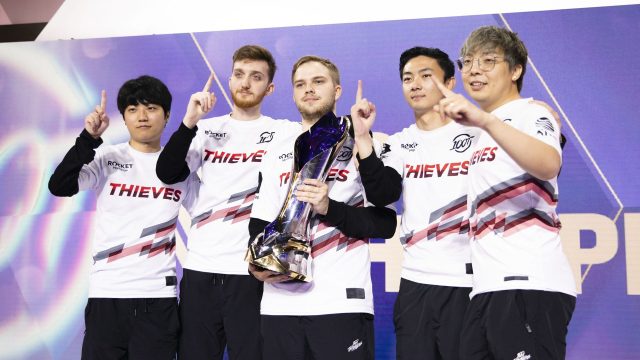 Provided by Riot Games 100 Thieves started their Worlds 2021 journey against Edward Gaming in Group B on Oct. 11

Welcome to our Worlds 2021 match ratings, as we move on to Day 3 of the group stage. Every day, I, your designated guinea pig and critic, will watch all of the world championship games so you don’t have to. I will be here to dish out star ratings for every game and let you know if I recommend the slew of fights that day at Worlds.

Another eight anticipated matches await us today, as the group stage moves into third gear. Royal Never Give Up vs. Hanwha Life Esports is the game to lead us out, while T1 vs. 100 Thieves rounds out another packed day at Worlds 2021.

Without further ado, here are my match ratings for Day 3 of the group stage at Worlds 2021.

Hanwha Life Esports vs. Royal Never Give Up

Day 1 was a disappointment. Day 2 saw some of the best matches of Worlds 2021 thus far. If the first game is any indication on how the rest of today is going to go, we might be in for a slew of must-watch matches. Hanwha and RNG battled for the entire duration of the game as both sides looked to be in control at one point or another in the extreme late-game.

If this game was too early for you to watch live, be sure to catch it on the replay, regardless if you get spoiled on the result. This was a good one.

A close fight to begin with, the Chinese side continued winning skirmish after skirmish until a relatively competitive game turned into a showcase for LNG. Their play around stopwatches in teamfights, and backing each other up, was a joy to behold.

Western League of Legends is down bad. There were a few moments of optimism for Rogue in this game, similar to MAD in the previous game, until the better team asserted control once the laning phase dissipated. No European team will end the first half of the group stage with a winning record.

Uhhhhh, I can’t really put this game into words. It was a fight in the mud that was nowhere the cleanest but more than likely will be a fight remembered for years to come. Gangplank with a full crit build late-game is nightmare inducing.

Western League of Legends is crying. What should have been a straightforward, one-star stomp by Gen.G turned into a sweat following an ill-advised teamfight in the bottom lane.

Still, the South Korean team held on and now are in the sole position to make it out of a combative Group D.

Robert “Blaber” Huang died level one. The reigning world champions did what champions do best by extending that first blood into a gigantic gold lead. As we’ve seen a few times this event, the trailing team found a few openings to craft some sort of intrigue, but DWG did their due diligence to go 3-0 group with little trouble.

Western League of Legends is 0-5 on the day. All hopium now belongs to the 100 Thieves to stop what seems to be inevitable Western collapse.

DFM tried, and I give them a lot of credit for that. They could have sat back and crossed their fingers hoping one of the tournament favorites would make a catastrophic mistake. But, they decided to go down on their own terms rather than wait for a slow, painful death. And, by doing so, DFM grabbed an early lead and gave us a bit of a show before succumbing to the overall stronger foe before them. I still believe DFM can grab a win in this group before exiting the international stage for 2021.

I’m pretty sure this game ended two minutes in. Western League of Legends has never been lower, going 0-6 on the day, and a majority of the games were not close.

This is a dark, embarrassing day for the West.