Rogue and FPX will face off in the first game, Cloud9 will take on the winner 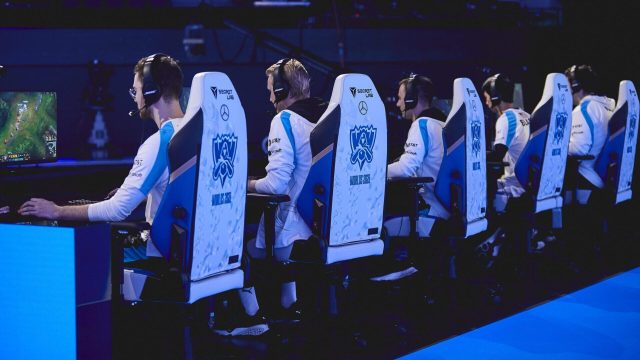 Photo by Lance Skundrich/Riot Games A loss to defending champions DWG KIA has put Cloud9 in a three way tiebreaker with Rogue and FPX.

When Cloud9 entered Day 4 of the group stage at 2021 League of Legends World Championship, they were in an 0-3 hole and had the biggest mountain to climb among all Group A teams. The only chance the North American third seed had at qualifying through to knockouts involved a complex web of scenarios that involved them winning most of their remaining games and their opponents losing most of their remaining games.

While C9 did lose their final game of the day against South Korea’s undefeated juggernauts DWG KIA, they got one of their most favorable scenarios apart from simply qualifying through: a three-way tie with Europe’s Rogue and China’s FunPlus Phoenix, with the upper hand in seeding.

Cloud9 lose to DWG KIA, give lifeline to Rogue and FPX

After handily beating Rogue and FunPlus Phoenix to start the day, Cloud9 had their toughest test remaining. South Korea’s DWG KIA were undefeated at 5-0 and were C9’s only remaining obstacle to qualifying for knockouts.

Cloud9 began the game brimming with confidence and looking to make aggressive plays. One of these plays even involved an unsuccessful attempt at killing Heo “ShowMaker” Su in a 4-1 gank between mid lane turrets.

But DWG KIA showed their poise and weathered C9’s early aggression. They created an early lead, survived the mid game off a clutch baron steal from Kim “Canyon” Geon-bu’s Lee Sin and won a huge fight at the dragon pit that turned the game in their favor. From there it was the ShowMaker show as the juggernaut mid laner showed the world why he’s the class of the mid lane on his raid boss Kassadin.

While the Cloud9 and DK game was ongoing, Rogue and FunPlus Phoenix were waiting in the wings. With both teams finishing the regular phase of groups at 2-4, they needed a C9 loss to force a three-way tiebreaker scenario.

Now that the final scheduled game is in the books, that’s exactly what we are headed towards. Since Cloud9 earned the favorable seed through their shorter match times, Rogue and FPX will face off in the first tiebreaker. The winner of that game will then take on Cloud9 for Group A’s second seed in knockouts.

Of course, DWG KIA have already become the first team to qualify to knockouts with their 6-0 record.