The Xy’mox’s Charity Cache and Solo Shuffle Showdown are happening this month. 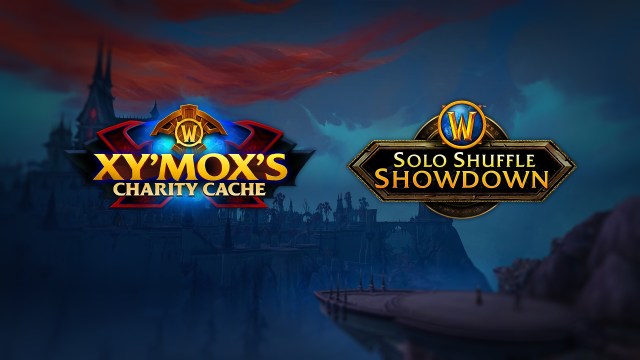 World of Warcraft has announced the Xy’mox’s Charity Cache and Solo Shuffle Showdown events. The Xy’mox’s Charity Cache will feature World of Warcraft esports teams Echo and Team Liquid, whose gameplay will raise funds for two non-profit organizations. Meanwhile, the Solo Shuffle Showdown will be a tournament for the PvP community.

Direct Relief’s mission is “to improve the health and lives of people affected by poverty or emergencies — without regard to politics, religion, or ability to pay.”

As for AbleGamers, the organization is about “creating opportunities that enable play in order to combat social isolation, foster inclusive communities, and improve the quality of life for people with disabilities.”

Both World of Warcraft guilds will duke it out against bosses as fast as they can to earn their respective charities a piece of the $100,000 donation pool.

The Xy’mox’s Charity Cache event will also have a few twists; for example, each raid will involve two checkpoints that grant a donation amount. The guild that reaches the checkpoint first will get a higher amount. The guild that gets to a checkpoint first will also receive a Fated Curse modifier. This will amp up the chaos in one of their next encounters. Additionally, all the bosses will have at least two Fated Powers activated instead of the usual rotation.

Happening ahead of Solo Shuffle getting a ranked mode in World of Warcraft’s Dragonflight expansion, the brawl will get its first-ever competitive tournament.

On Sept. 23 for the European region and Sept. 24 for North America, 36 WoW players from each region will participate in three Solo Shuffle matches. The players will be split into six lobbies.

The top 12 players from each region will head to championship Sunday happening on Sept. 25. These players will fight in two matches before the top six clash in one more match. Then, two winners consisting of one healer and one DPS will receive the Solo Shuffle Showdown crown plus their share of the $100,000 prize pool.

As for the competitors, they will be chosen players from the World of Warcraft PvP community alongside those in the Arena World Championship and rated PvP ladders.