When does the Pokemon Scarlet and Violet TCG release?

When does the Pokemon Scarlet and Violet TCG release?

new changes 20+ years in the making 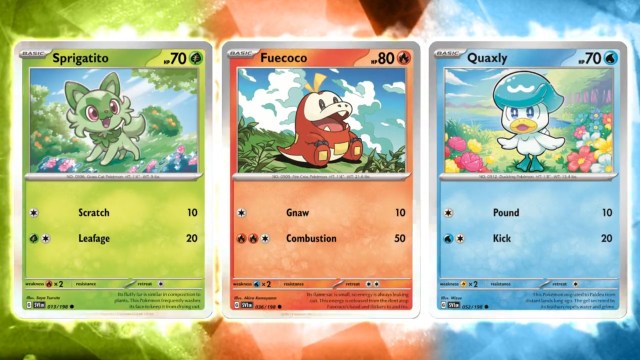 With the release of the newest generation of mainline Pokémon games for the Nintendo Switch, Pokémon Scarlet and Pokémon Violet, the release also marked a new generation for the Pokémon Trading Card Game.

After years of following the Pokémon Sword and Shield series, The Pokémon Company International is set to begin a new era of the Pokémon TCG with the release of Pokémon Scarlet & Violet. Gone are the Vstar, Vmax, and V Pokémon as they will be replaced with brand new mechanics and brand new Pokémon for players to get their hands on to collect and play.

The base set for Pokémon Scarlet & Violet is set to launch on March 31 and will not only introduce brand new mechanics like the new ex Pokémon and terastallization, but it will also bring fundamental changes to how products are printed. Here is a look at the big changes coming with the release of the Pokémon TCG set, Scarlet & Violet.

The first expansion in the Scarlet & Violet era is going to be historic as there are several changes that the team at TPCi has been waiting to make for years to implement.

The first is the border on the cards themselves as the Japanese cards have had a silver border instead of a yellow one since 2010 when Pokémon the Pokémon Black and White series came out. Now after more than 20 years of yellow borders, the Global card game will now follow suit and have silver borders. Other changes include quality-of-life improvements to energy and trainer cards that will make it easier for players to gather information.

Scarlet & Violet is a new era for the #PokemonTCG. ❤️ 💜

Learn about the changes coming to the Pokémon TCG in the upcoming Scarlet & Violet Series.

The last big change will be to the pricing of the product which will be increasing by 50 cents USD to keep up with global inflation. To offset the cost, booster packs will now have three guaranteed foil cards. Other products like Elite Trainer Boxes will include additional goods like another booster pack and a full art promo card.