When does Fortnite Chapter 4 start? Leaks, Fracture, and more - Upcomer

Get ready for the next exciting Fortnite Chapter 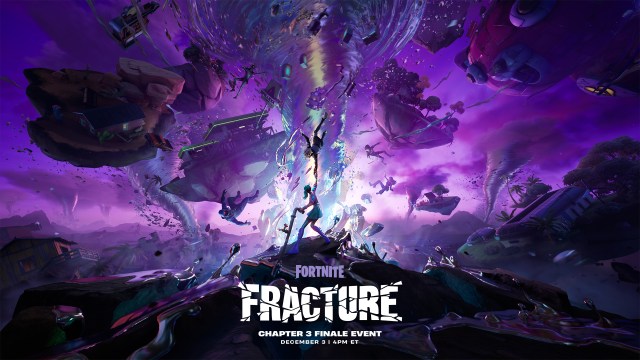 Fortnite Chapter 4 is only days away! The newest version of the popular battle royale releases this Saturday, December 3 at 4pm ET. Players should finalize their Chapter 3 campaign and get ready for the finale event. Here’s all the notable leaks for Fortnite Chapter 4, as well as everything you need to know about Fracture, the Fortnite Chapter 3 finale.

According to HYPEX, one of the top Fortnite leakers, first person shooter mode will be coming to Fortnite. Some images have been floating around the internet with “Fortnite Developer Client” or “Test Purposes”. These appear to show some evidence of a first person mode where players see more of what’s in front of them rather than their character. Along with HYPEX’s tweet, these could be legitimate leaks and we might see this mode land in the next season.

We have 5 MAJOR leaked things that will most likely release in Fortnite's Chapter 4 this December 3rd, or throughout Season 1 🔥

Epic Games has been teasing motorbikes since July this year. Next season we could see them in the game. The Apex have also reported motorbikes landing in Fortnite Chapter 4. There have been some motorbike themed emotes, such as Deadpool riding on the scooter, but no riding motorbikes in-game yet. Many fans have shared concept artwork for motorbikes, showing the players are keen for this addition to the game. According to HYPEX, flying animals are part of the new chapter. We’ll have to wait until Chapter 4 releases this Saturday to find out if HYPEX hits the mark.

Everyone likes to speculate before big releases. Fortnite recently tweeted some of their artwork for the coming finale event. The finale will feature key moments of Chapter 3 and will usher in Chapter 4, more on that below. This beautiful picture and accompanying text seem to suggest that Midas might make a return in Chapter 4. Midas, originally from Chapter 2, Season 2, wanted to destroy the Fortnite island and the Storm. He wanted to escape the endless loop of the Battle Royale. Donald Mustard, the the Chief Creative Officer at Epic Games, confirmed in a recent Tweet that “Midas is not dead.” Fans should see the character return in the next chapter.

All that glitters has consumed the ground you walk on. What now? #FortniteFracture. 12.3.2022 pic.twitter.com/CmoZbCR4AE

A spray also appears to have been leaked. Called “Silver and Gold”, this spray seems to further suggest Midas is returning.

But before we get there, Fracture Finale

Chapter 4 will kick off soon. But before it does, we have the Chapter 3 Finale: Fracture. This will be an in-game event where players can live through the final moments of this ending chapter.

Nothing ever lasts forever.

The Fracture event will take place on Saturday, 3rd December. Players can join as a solo, duo, trio, or squad of four. The event will start at 4pm ET and will be available to join until 4.40pm ET. Players can log in up to 30mins prior to the start of the event. If you won’t be home or not near your dedicated gaming PC, you can join the event via Xbox Cloud Gaming. If you haven’t logged into Xbox Cloud Gaming before, check out our handy guide to get you started.

Anyone who logs into the event will also be treated to this toasty emote:

Before the event starts, make sure you’ve finished up everything from Chapter 3. This includes completing as many missions as possible and spending your Battle Stars to unlock rewards. Try and finalize any request rewards and remember that anything unclaimed will be lost once Chapter 4 begins. If you are a couple of levels short of your goal, consider spending your V-Bucks to push you over the line.