"We're confident we can beat the Fuel": San Francisco Shock are primed to win at the 2022 Summer Showdown

“We’re confident we can beat the Fuel”: San Francisco Shock are primed to win at the 2022 Summer Showdown 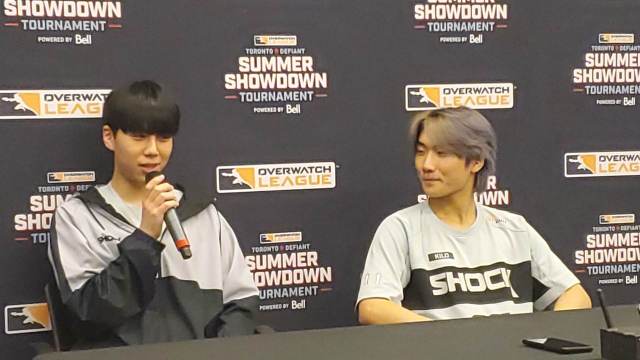 by Michael Czarnowski
[addtoany]
Original Reporting
On the Ground

Heading into the Overwatch League 2022 Summer Showdown, the San Francisco Shock have both proven themselves a powerful foe but also one with troubles succeeding in LAN events. Despite their near-perfect qualifiers throughout the year, they’ve fallen in two different ways in the two previous playoff runs. In the Kickoff Clash, they fell early on despite an undefeated qualifier. After remaining undefeated in the Midseason Madness qualifiers, they rallied to reach the finals, only to lose to the Los Angeles Gladiators.

Now, in Toronto, Canada, the team seems to be hitting their stride. This is yet another strong attempt to get over the hump; to show they’re still one of the top teams in the league. With back-to-back stage champions Los Angeles Gladiators not even in the competition, there will be a new champion in the West; the San Francisco Shock are in prime position to take that throne, but they still have a familiar opponent ahead of them.

A strong start in Toronto

The first matchup for the Shock was against the Vancouver Titans, a team that went from winless to sixth seed in the Summer Showdown. Despite their opponents showing some resolve in the series, the Shock used more complete teamwork to win the series 3-1. Post-match, Shock tank player Colin “Coluge” Arai spoke about both how underrated the Titans were, but how happy he was to beat them.

“A lot of teams are underestimated in this meta,” Coluge said. “I think Vancouver have the skill to be top four in this meta, but some of the first LAN jitters showed. If you look back at some of their outcomes in the qualifiers, they were a couple of fights away from getting a better seed.”

The series wasn’t a rout for the Shock, but the team improved as the series went on to take the win. Shock DPS player Kim “Proper” Dong-hyun also spoke up on the win, heading into the next day.

“As Coluge mentioned, this game was tough, but a win nonetheless,” Proper said. “Hopefully our next wins are easier; we’ll improve as the event goes on.”

Proper remains one of the most explosive and consistently great DPS players in the league — a big reputation built for a rookie. Considering almost the entire Shock roster are rookie-of-the-year candidates, it was nice to hear that the team is rooting for Proper to win all the awards he could.

“I know Proper is a unique talent,” Shock support player Oh “FiNN” Se-jin said. “Mainly because he can play both hitscan and projectile DPS at a very high level. Instead of focusing on the rookie-of-the-year award, personally, I just want to help him win it — along with league MVP.”

Progression in the Junker Queen meta

After defeating the Vancouver Titans, they faced the Houston Outlaws, a strong team in this meta. That was until the match played out, with the Shock taking another 3-1 win. Despite another map loss, their three map wins were a lot cleaner than their Titans match. Post-match, FiNN saw that win as progress towards a good tournament and end of the season.

“We’ve had success in these tournaments but always fell short due to the lack of prep and experience we’ve had,” FiNN said. “But we’re past that now, we’ve learnt and we will win this tournament and the grand finals as well.”

FiNN was in a tough position heading into this meta, primarily a flex support player, known for his Ana, Zenyatta and Baptiste. So when he had to fill in on Brigitte with no time on her, he did what he had to and learnt from the best.

“I never played a minute of Brig before heading into this meta,” FiNN said. “It was tough, but I studied a lot with her, asked a lot of other Brig players to help. I know I can still learn a lot, but I also know I can play it well with my team.”

Even with that confidence and two LANs under their belt headed into Toronto, the nerves were still there. Jung “Kilo” Jin-woo spoke out on his nerves, even with the team’s two wins in this tournament.

“For me, I’m always nervous regardless of the team’s performance,” Kilo said. “I know I can do my role and that’s what I focus on, and I know this can help lead to a title, either this stage or later.”

A familiar foe in the way

After their win against the Spitfire, the Dallas Fuel were up next. Aside from the Los Angeles Gladiators, this was Shock’s strongest opponent in this stage. They lost to them in a 3-0 sweep from the Fuel in the qualifiers, ending their perfect regular season thus far; but they know they’ve improved since then. Whether in the upper bracket finals or in a grand finals match, they will get their revenge.

“We’ve made a lot of adjustments to our playstyle,” Kilo said. “We know we can beat Dallas in this tournament.”

FiNN echoed that statement, confident that they can beat Dallas this time around.

“We’ve learned from the last loss against them,” FiNN said, “and we’re pretty confident that we can beat the Fuel.”

In the end, Proper said something about the 2022 Summer Showdown that Shock fans might not expect. He thinks that one small change of mindset has helped him look at this run in a different way, and it’s working so far.

“We’ve come up short in previous tournaments, but we’re playing this tournament like regular season matches,” Proper said. “This tournament doesn’t put a lot of pressure on us, but we want to win.”