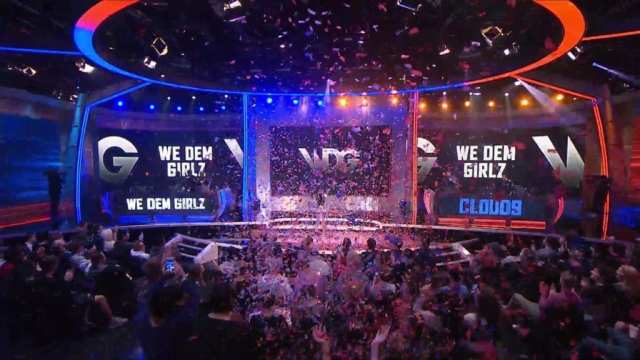 We Dem Girlz, after having been dropped by Team Envy, finished their year by winning the ELEAGUE Cup 2018. Following their third-place finish at RLCS Season 6 in early November, the Europeans have won their first major LAN as a new roster, pocketing $72,000. Picking up Otto “Metsanauris” Kaipiainen turned out to be one of the best roster moves from the off-season.

Quick dribble by @Metsanauris and puts it in the back of the net. pic.twitter.com/8Y0aC7oTSe

No Organization, No Problem

Alongside former world champion Remco “Remkoe” den Boer and relative newcomer Jordan “EyeIgnite” Stellon (though we really should stop calling him newcomer at this point), he lost the very first series of the weekend against Flipsid3 Tactics. They came back through the lower bracket, however, beating NA’s Evil Geniuses and taking revenge on F3.

But it didn’t just stop there. They quickly shoved NRG aside 4-2 in the playoffs to claim their spot in the Grand Final against the fresh RLCS world champions of Cloud9. C9 was putting up a show all tournament long and many expected them to cruise their way to another major title. But what many also forgot was that WDG was the only team to defeat Cloud9 at the RLCS, sending them into that impressive lower bracket run.

WDG came blazing out of the gates in the Grand Final. They immediately went on a rampage, continuing their strong form from the season. Remkoe being the pillar of the team, he impressed with his stability and consistency. EyeIgnite proved he grew from a rookie from two seasons ago to a world-class player, while Metsanauris showed CompLexity that dropping him from the team had been a very, very bad move. The trio went on to win the first three games in the best-of-7, immediately putting themselves on match point.

Cloud9 took this as a warning sign and started to adapt, which resulted in a win for the North Americans. But WDG wouldn’t just allow a reverse sweep. C9 hadn’t looked on the same level as their previous series and WDG happily used this to their advantage. In game five they returned straight to where they’d left off two games back and completely controlled the field. With a 7-1 victory in the final game, they dominated Cloud9 to secure their first major trophy.

WE DEM GIRLZ ARE YOUR #ELEAGUECUP CHAMPIONS!

It is Remkoe’s first trophy since winning the RLCS world championship back in season 3 and second win out of two Grand Finals he played. Metsanauris finally claimed his first after a long streak of ending in second and third over the years. EyeIgnite, playing his first ever Grand Final, joins Remkoe in his perfect record with one Grand Final and one trophy. It’s rather mindboggling that no reputable organization has picked up this incredibly talented and more than promising roster yet. We will be eagerly awaiting any news from the team ahead of RLCS Season 7.