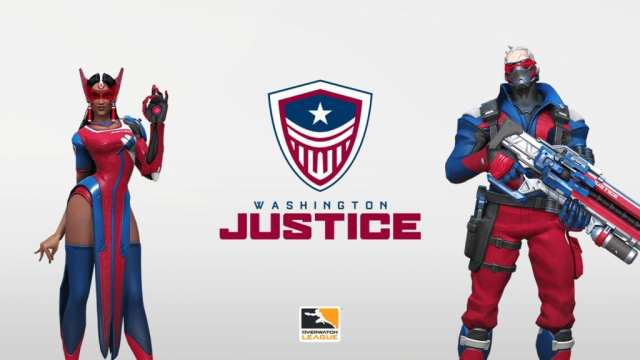 We finally know the name of the final expansion team to join the Overwatch League. The Washington D.C. based team, Washington Justice, will be joining the fray next season.

Courage, honor, loyalty, sacrifice. But most important is justice ⚖️

We're stoked to be a part of #OWL2019 and we can't wait to show you everything we've got! #JusticeIsServed pic.twitter.com/9I8OEo1xdd

The Washington Justice are the last team to reveal their branding to the Overwatch League community. However, they haven’t given many details to their roster yet. This reveal comes two days after another expansion team, the Vancouver Titans, would reveal their branding and logo. With this announcement, there are now twenty teams in the Overwatch League. Washington Justice will join the Atlantic Division, alongside the Paris Eternal, Atlanta Reign, and Toronto Defiant. Meanwhile, the newly-announced Vancouver Titans, Chengdu Hunters, Guangzhou Charge and Hangzhou Spark will join the Pacific Division.

As per their theme of justice, the team will be rocking a classic colorway of red, white and blue. The team also seems very patriotic, as would be expected of team based in Washington D.C. Their logo is very reminiscent of Captain America’s shield, which is also a symbol of justice and unity. Within the logo is a very subtle W, with the focus on what looks like the Washington Monument. It also has motifs similar to the American flag. Investor and entrepreneur, Mark Ein, would state the importance of unity with the Justice brand:

Justice is a universal value and the perfect name for a franchise that we hope will inspire and unite both our Washington area community and fans around the globe. There is no region in the world that attracts more people to serve the cause of justice in government, philanthropy, academia, military service, and the private sector than Washington. In fact, DC’s official city motto is ‘Justitia Omnibus,’ which translates to ‘Justice for All.’

We are sure that fans of the Washington Justice will be ready to rally behind their shields come the second season of the Overwatch League.

For now, most of the details we know about the Washington Justice roster are from possible leaks. However, we do know that former New York Excelsior main tank Song “Janus” Joon-hwa will be joining the team. Additionally, we know most of Washington’s coaching staff, with Kim “WizardHyeong” Hyeong-seok leading the charge. Molly “AVALLA” Kim will be the assistant coach to WizardHyeong, with former Contenders analyst Mikael “mkL” Skjønhaug joining the team as well.

With the roster, the team is rumored to be picking up several players, including former Shanghai Dragons DPS, Gi-hyeon “Ado” Chon. Gi-do “Gido” Mun, formerly of the Seoul Dynasty, may be joining the team as well. The rest of the roster is reportedly going to be made up of players from the North American Contenders league. The team will also be acquiring some players from the South Korean Contenders scene. Players like Hyang-ki “SanSam” Kim and Hyeon-woo “Hyeonu” Cho were last playing in Korea for Meta Bellum and the like, and are linked to the Washington Justice.

We wish the best of luck to the Washington Justice in the upcoming Overwatch League season!

What are your thoughts on the Washington Justice’s branding? Let us know what you think in the comments below! If you want more Overwatch League coverage, check us out here!