Warzone 2 has a name 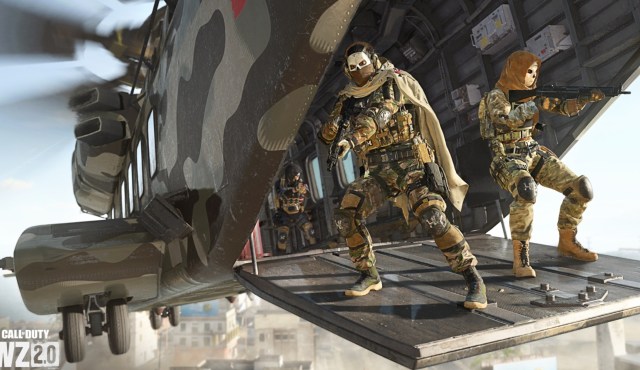 The official map for Call of Duty: Warzone has been revealed at Call of Duty Next, with the map being named “Al Mazrah.” The map was described as the biggest battle royale map in Call of Duty history, meaning it’s larger in size than both Verdansk and Caldera. We also got to see a full list of the various points of interest for Al Mazrah. Fans of the original MW2 will see a ton of familiar locations. Infinity Ward has implemented several classic maps from that game as POIs in Al Mazrah.

So far, we got to see Quarry, Terminal, Highrise, and Scrapyard locations in Warzone 2. However, there could be more when we fully see the Al Mazrah map in action. Below, players can see the map in its entirety along with the location of every POI.

In addition to the map and locations themselves, we also heard a ton of new gameplay additions coming to Warzone 2. Perhaps one of the most exciting new additions is Proximity Chat, which will allow players to talk to and hear enemies that are near them on the map; this feature was heavily requested by the community.

We also got to hear about the looting process in Warzone 2. Infinity Ward developer Joe Cecot stated that players will be able to loot certain things from set locations. There will be medicine cabinets in bathrooms that always hold healing items, and players can always find loot in specific areas along the map. There is both ground loot and crates for players to find items.

There was information about the Gulag and the Storm Circle as well. The Gulag will now be a Duo Gulag, where two players have to work together to defeat the enemy team of two. If players win, both of them re-enter the game. As for the new Circle, players will see multiple zones at the end of the game. Then, these circles will merge into one to decide the winner of the match.

Finally, Strongholds was the last piece of intel released. These will be locations across the map that feature A.I. enemies who are guarding loot for players to gather. Defeat the A.I. to earn the loot.

That’s all of the official information we received about Warzone 2 today. Stay tuned to Upcomer all Modern Warfare 2 and Warzone news.