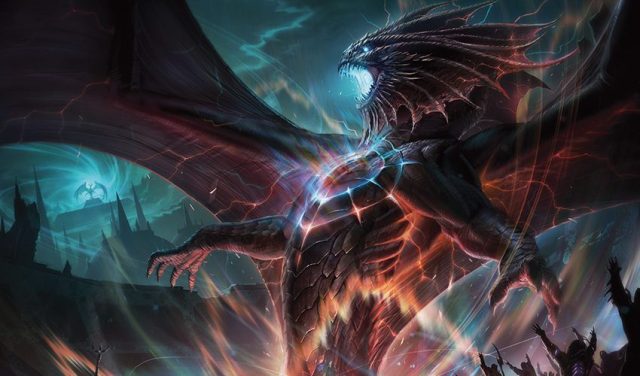 When last we heard from Ravnica in Magic: The Gathering‘s War of the Spark Act I story recap, things looked dire. Nicol Bolas had invaded with the Dreadhorde, an army of eternal zombie soldiers, led by the magically enslaved necromancer Liliana. When Ral Zarek betrayed Bolas and triggered a beacon calling other Planeswalkers to Ravnica, Bolas used the Immortal Sun, a legendary artifact, to seal the plane and keep anyone from leaving. Now Bolas and his army of Eternals clash against the assembled Planeswalkers in the War of the Spark.

Vivien Reid is a creature and nature-focused Green Planeswalker from the Smaragdi tribe on the plane of Skalla. Once deeply divided between the technological Nura tribe and the shamanistic Smaragdi, Skalla was forced into an alliance when Bolas came to the plane, stole the secrets of the Nura and began to destroy the plane when it was of no more use to him.

Retreating to the forests, the Nura combined their technology with the nature shamanism of Vivien’s people to create the Arkbow, a device imprinted with the spirits of every animal on Skalla. However, before Vivien could use the weapon, Bolas destroyed the plane, triggering Vivien’s first planeswalk.

Since then, Vivien has traveled plane to plane, collecting the spirit imprints of each plane’s most powerful creatures – until Ral Zarek’s beacon draws her to Ravnica and her chance at vengeance.

Teyo Verada is a teenage Walker from the plane of Gobakhan. Home to two massive diamond storms known as the Eastern and Western Clouds, civilization there lies in the thin band of safe space between the two storms.

To protect themselves from the deadly storms, the Shieldmages, masters of defense magic, were formed to guard each side of their society. Teyo was the worst member of the Order of the Shieldmage until an especially potent storm led him to his first planeswalk, making the War on Ravnica his introduction to the multiverse.

Two of the strongest and oldest Planeswalkers in this story, Sorin and Nahiri, have long ignored the grander wars around them and remain focused on trying to kill each other instead.

Thousands of years ago, when Nahiri first sparked, Sorin mentored her on how to use the godlike powers that Planeswalkers commanded back then. Alongside Ugin, Bolas’ twin brother, they became aware of The Eldrazi, cosmic horrors from outside the multiverse that could consume planes entirely.

Uniting Ugin’s mastery of colorless magic, Sorin’s vampiric life-draining skills and Nahiri’s lithomantic ability to shape stone, they baited the Eldrazi to Nahiri’s mana-rich home plane of Zendikar and sealed them in a network of Stone Hedrons.

The group disbanded after this victory but, centuries later, the hedron network was disturbed and the Eldrazi Titans began to awaken. Nahiri called her allies for help and got no response, forcing her to deal with the issue alone. This came at a great cost of life for her native Zendikari people.

After the crisis, Nahiri searched for her allies. Ugin, at the time, was in a healing coma after losing a battle with his brother, Nicol Bolas. (A coma he was put into with the aid of the time traveling Planeswalker Sarkhan Vol and one of the very Hedrons used the seal the Eldrazi.) Sorin, however, was safe and sound on his home plane of Innistrad. Avacyn, his newly created guardian angel of the plane, had formed a seal around the plane that had blocked Nahiri’s summon. When confronted by Nahiri, Sorin showed no care or remorse for what had happened on Zendikar.

In a fit of rage, Nahiri attacked Sorin, only to be defeated by Avacyn and sealed in the Helvault, a mystic prison forged from Innistrad’s moon. Sorin had created the vault to seal the most dangerous Demons of Innistrad inside.

Nahiri lay in the prison for centuries as it filled with demons. She finally gained freedom when Liliana broke the Helvault to free and kill Griselbrand, one of the four demons she was bonded to by Bolas’ magic contract.

Once free, Nahiri returned to Zendikar and saw that the Eldrazi titans had been awakened (by another Bolas plot unknown to her) and ravaged her home. Driven mad with rage, Nahiri attacked Sorin’s ancestral home on Innistrad, slaughtered his kinsmen, and then used lithomancy to warp the leylines of Innistrad.

Just like on Zendikar, this drew Emrakul, the third Eldrazi titan, to the plane. Emrakul’s “nearness” to Innistrad caused the citizens of the plane to fall to madness and mutation. Avacyn and her flight of angels, once peaceful guardians, were manipulated to hunt down the people they were meant to protect.

In a sick twist of irony, Sorin was forced to kill Avacyn, the daughter he himself had created. This went perfectly according to Nahiri’s plan, who knew that without Avacyn’s seal on the plane, Emrakul could break through and consume the plane.

As a final, vengeful blow, Nahiri trapped Sorin in stone to watch everything he loved die before him. The trap kept him from planeswalking away.

Before Emrakul could completely devastate the plane, however, members of the Gatewatch arrived on Innistrad to fight against her. Sensing that this was not the time to feed on Innistrad, Emrakul willingly gave herself up and allowed the Gatewatch to seal her in Innistrad’s moon. This was done using a scroll from the Planeswalker Tamiyo, who was a brilliant collector of stories, tales, spells and research.

The damage was done though, and when Sorin is freed from his prison by the beacon on Ravnica, he and Nahiri resume their eternal feud of blood and stone, War of the Spark be damned.

Back on Ravnica, where the attack rages on, the previously separate guilds have bonded together to defend their homes. Cards like the Bond cycle showcase the power of this planar alliance against the invasion.

In the air of Ravnica, the Angels of the Boros Legion fight side by side with the brutish ogres of the Gruul against their common enemy: the airborne Eternals of the Dreadhorde.

Chief in this battle are two champions of Ravnica once thought lost: Feather, the Redeemed and the Parhelion II.

Feather was once an angel member of the Boros. After an unknown crime, she had her wings bound and was forced to work alongside the mortal police of the Wojek League. During the events of the original Ravnica sets, she was one of the few angels who survived when Szadek, the founder of the Dimir guild, crashed the first Parhelion, the floating fortress of the Boros, into the Azorius headquarters of Prahv.

Returning sometime after this attack, Feather became the new head of the Boros and spawned a new breed of angels. Aurelia, one of these spawn, eventually rebelled and took control, arguing that a disgraced angel could not lead the guild. Feather lay imprisoned until she was freed by the goblin mob boss Krenko during the events of the Return to Ravnica sets. Now, redeemed by combat, she leads a flight of angels alongside the rebuilt Parhelion II and its massive laser cannon.

Knowing the Immortal Sun is the source behind the seal keeping the Planeswalkers trapped, several Walkers assemble to take down Dovin Baan, who guards the Sun in the Azorius towers of New Prahv. Saheeli Rai, a fellow native of Kaladesh with the power to create animated constructs, tracks Dovin down by hunting his Thopter spies. This leads to an epic grudge match between Dovin and the Kaladeshi Gatewatch member Chandra, Fire Artisan.

Dovin was a member of the consulate on Kaladesh, the organization that regulated the Aether that powered the plane’s technology. Chandra’s mother, Pia Nalaar, led a rebellion against this consulate after Tezzeret coerced them to confiscate all the inventions showcased at the Inventor’s Fair he was there to judge. This was how Bolas gained access to the Planar Bridge to enact this invasion in the first place.

After dispatching his artifacts, Chandra traps Dovin in a cage of fire, ending the duel between the long-time rivals.

At the climax of the allied pushback, Nissa Revane, the first member of the Gatewatch to leave the group, uses her power to bond with nature and leylines to cause the Awakening of Vitu-Ghazi, the massive tree headquarters of the green and white Selesnya guild.

In a triumphant blow, Vitu-Ghazi topples the statue of Bolas, emboldening the Ravnica alliance and raising morale.

Bolas is unconcerned about this petty rebellion, however, as his trump cards lay in wait. When Bolas returned to Amonkhet to harvest the plane’s corpses and build his army of Eternals, he also devasted the plane. His corrupted Scorpion God killed four of the five Amonkheti gods. Their bodies, like the mortals who once worshipped them, were also put through the eternalization process.

Tamiyo, Collector of Tales, who has previously been content to observe and record the conflicts below, is moved to action by the sheer scale of the threat that the God-Eternals present.

When things look darkest, the plans of the heroes go into action.

When on Ixalan hunting for the Immortal Sun, Vraska met and bonded with an amnesiac Jace, mind mage of the Gatewatch. The former enemies became allies and together planned a way to bypass Bolas. Vraska willingly let Jace erase and store her memories with him, only to replace them with false ones. This would mask her double agent status from the mind magic of Bolas.

With her memories restored by Jace, the pair worked with Ral Zarek to enact Niv-Mizzet’s plan. The Draco-genius had been struck down early in the invasion by Bolas but this had been part of his grand scheme. His research went into creating a new form of himself, one that could absorb the powers of the Guildpact, the magic law that ran through the plane.

With his soul safely stored inside a device of his own design and hidden away by Ugin and Sarkhan, the team was able to use his plans to reincarnate Niv-Mizzet, Reborn as the new living embodiment of Ravnica’s Guilds.

Just as Niv-Mizzet achieves his final form, Bolas enacts the final phase of his plan. The Dragon-God casts the Elderspell and ushers in the third and final act of the War of the Spark.

The Endgame has commenced.