War of the Spark spoilers: Awakening of Vitu-Ghazi revealed

War of the Spark spoilers: Awakening of Vitu-Ghazi revealed 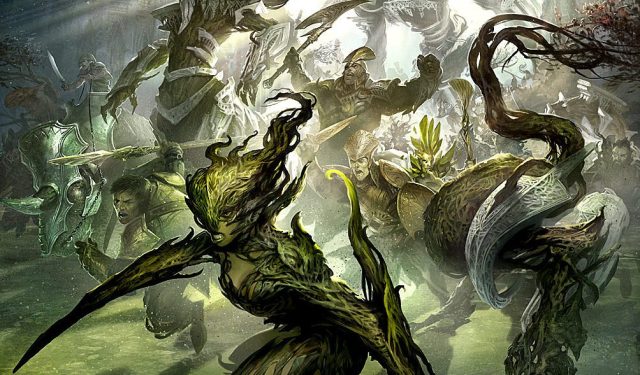 Magic: The Gathering War of the Spark spoilers continue! Freshly spoiled Awakening of Vitu-Ghazi turns a land you control into a legendary 0/0 creature, then puts nine +1/+1 counters on it. Nine! And at instant speed! This is an absolute powerhouse of a card for both limited and constructed formats. Check it out below. (And as a leak, keep in mind image quality may not be perfect.)

The Selesnya cards have a history of creating creatures in non-standard ways. For example, their old “2-drop” from Return to Ravnica created a token instead. And Vitu-Ghazi has some history itself, as the tree at the heart of Selesnya territory on Ravnica. It is their guildhall and home to Guildmaster Trostani. And now it marches to war, to defend the Conclave’s home and all of Ravnica. In addition to all this goodness, the flavor text for this War of the Spark card is phenomenal:

I think this card has a very high power ceiling and could fit into a lot of Magic decks. I don’t expect it to make massive waves in Standard, but in the right deck, it could close a game out very quickly. The sort of mono-green “stompy” decks playing cards like Steel Leaf Champion and Carnage Tyrant will want another big threat to play. Being an instant, you can use this to eat attacking creatures by surprise on your opponent’s turn. You can also use it to create a massive threat out of nowhere — and maybe even snatch the game.

I think the second sort of deck that might want this would be a form of control. Control decks like threats they can deploy at the drop of a hat, say, in an opponent’s end step. This lets them be flexible during their opponent’s turn and then throw them a curveball before untapping themselves. The ability to deploy this at instant speed I believe is its greatest asset, and I would not like to be looking down the barrel of one of these in my end step!